Now that Shortcuts has been updated so much under iOS/iPadOS 13, I thought it might be fun to think about the future. Could you imagine opening OmniFocus with projects in on Split View window and tags in the other? Or notes (Drafts/GoodNotes/Etc.) on one side and safari on the other to set up a research workflow?

There have been a number of wishlist posts here in this Automators forum in the past, which I’m linking here and will update to add any others that I find:

With the tantalising prospect of a potential new version of Shortcuts on stage at WWDC on Monday (we can dream, right?) I collated everything I’d like to see in the next version…

My wishlist for coming improvement updates on Shortcuts App Shortcuts

Besides supporting more Applications and new functions I would be more interested in better usability and UI improvements for the future. Change language inside the application for e.g. from german to english or french etc. without changing the system language of the device. Folder inside Shortcuts App (I know there are lots of controversial debates/topics about folders… My personal thoughts after reading different opinions about having folders or not is why not have at least the opportu…

What prompted me to post is that since iOS 13, I’ve substantially expanded my use of and reliance on Shortcuts. A few weeks ago, I spent some time creating Shortcuts for some projects that usually take me forever to get done. A couple of days later, I was sitting at a Starbucks and spent 15 minutes on my iPhone doing what normally would have taken me about 2 hours of non-billable time to get done (or would have been pushed off to “another time” because it would have required me to have a bunch of resources around me and my Mac).

I was thinking of two things that I think would be a great addition to Shortcuts on iPad.

First, it would be great if Shortcuts could spawn new windows of applications that allow multiwindows.

Second, related, I’d love for Shortcuts to be able to access multitasking modes. Combine two windows of the same or different app in Split View; add a Spit View app with a current full-screen window that has the focus; open an app in Slide Over; manipulate the Slide Over/Split View windows. Extra credit, if you could programmatically access a specific window in App Spaces and access it/get information/etc.

Nota Bene: Zeroeth, I’m not listing this as on my wishlist because I think it’s been written about a lot, but I do want it: integration with Apple’s mail app. There is so much I could do with that.

What would you like to have to make Shortcuts more powerful?

As has been discussed elsewhere on here, true automation. Allow people to accept responsibility and run shortcuts truly in the background.

Everything else is bonus!

Access to trigger Shortcuts from any app without leaving the app. For example, via global keyboard shortcuts.

Agreed. That would be great.

Yes. My idea about being able to add apps to Split View from an open full screen app would make more sense with this functionality.

This works now, though. Or did you mean via taps, rather than Siri?

I’d love to get While loops

This is my biggest wish list item by far. At the very least I should be able to schedule shortcuts to run at specific times without confirmation.

I sort of work aroundd this by using alarms. I set an alarm for a certain time, set its sound to silent.m4r and setup an automation. I am far more likely to see/feel that alarm, so the shortcut will get authored (by stopping the alarm) most of the time. But of course, that doesn’t let me run shortcuts over night or when I am not at my phone. Not a perfect solution by any means, but better than the one Apple has provided. 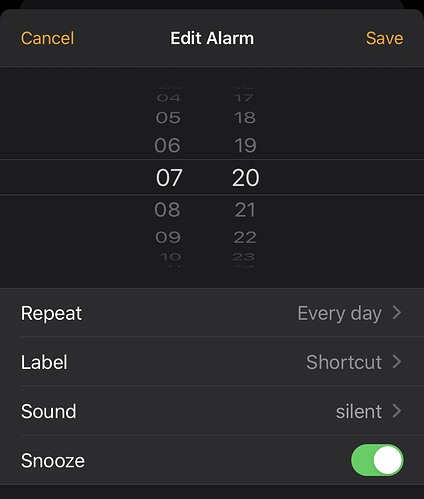 I mean, yes, but repeat works, you just might need an extra check at the top to abort with no valid conditions.

Ooh, great thinking on the workaround!

If you want to run shortcuts over night, you should take a look at my Autocuts and RepeatCuts shortcuts.

RepeatCuts let’s you effectively create while and infinite loops while Autocuts lets you run shortcuts automatically and according to a schedule.

You can configure RepeatCuts to lower the screen brightness, set the white point (to lower the brightness further) and activate Guided Access (so no one can access your iPhone while its running over night). Furthermore, to prevent screen burn-in, RepeatCuts can toggle Light/Dark mode periodically.

Battery usage is minimized when used this way. Over a six to seven hour night of running continuously, I saw only a 20-25% battery loss.

@ryanjamurphy It seems partially implemented to me though. Some advanced stuff just doesn’t run from the watch. Like the Philips Hue controls I set up a while back.

EDIT: I just tried it with a simple “Find my keys” using the Tile integration and it works from the app, but not the watch. Always says “Something’s amiss. Try again later” or something to that effect.

@radiocolin, I agree. Either that, or a break option.

Well, from my own standpoint, the Starbucks shortcut is da bomb!

How does Autocuts work, exactly? Sorry if that’s a rookie question, but if a shortcut you wrote can add true automation to iOS, why wouldn’t apple have included it in the first place? It seems like it’d have to be a system feature, not something a third party could write a shortcut to do?

Autocuts works by tying into the Open All personal automation. You define shortcuts (called autocuts) in Autocuts Admin that should run at certain times, locations, etc. whenever you open an app (defined in the Open App automation), Autocuts runs. It evaluates whether there are any shortcuts that need to run at the current time and does so.

It is a workaround, but it can allow people to be able to run shortcuts automatically without having to tap on a notification. You just use your iPhone normally, and Autocuts will run periodically.

Other ways to get shortcuts to run automatically is Pushcufs Server or RepeatCufs. Both run in the foreground and execute shortcuts continually.

Very cool, thanks for such an awesome shortcut!