I am excited now! Those conditional triggers, oh my…

conditional triggers and iBeacon support are in and ready to go.
anything missing?

Pushcut now supports local triggers like: “every weekday at 7.30 PM, but only when I am at home” “when I leave from work between 4 and 8 PM” [Image%206] And, as requested by a few Automators, I also added support for iBeacons. I know everybody (including me) is busy drooling about iOS 13 shortcuts - but I think this allows for pretty cool automation as well ; ) Let me know what you think!

A local trigger - invoked by a timer pop - worked fine.

However, it’s a royal pain in the neck to set up a timer pop just to test a Pushcut cut. You have to set it for 1 minute later and wait.

So, can we have a URL scheme to do it? Or else a “test me now” button?

Hi Martin, thanks for the feedback!

About the testing: There is a “Test Notification” button directly in the notification editor toolbar - is there a chance you did not see that one? Or are you talking about some other means of testing?

About the URL scheme: I might add that in the future, but with iOS 13 coming I want to get a good shortcuts integration done first - with “proper” shortcut actions.

Thanks Simon. I’m embarrassed to say I hadn’t noticed that.

I was trying it from the Triggers screen - where I still think it would be useful to have the button. Maybe call it “Do it now” or “One time” or somesuch.

And I understand about the URL scheme: This is the season where developers sneak stuff out while they’re procrastinating on iOS 13 support.

Here it is: iOS 13 comes with support for local scheduling through Shortcut actions:

I posted about it here:

I am having difficulty with my iphone 6s and getting the list of pushcut actions to show up within ios shortcuts. On 13.1.1 now. I do not have this issue with my ipad on ipados 13. If you have any ideas for troubleshooting, that would be great. Overall I really like the app, but this has been slowing my ideas for further development, especially with my iphone being primary device.

I had to go into the ios settings for Pushcut>>Siri & Search>> enable the “learn from this app” which I think is what “enabled” them within shortcuts. Worked for a little while and then not again.

Not sure if this is a shortcut donation integration issue…

thanks for reporting this!

it seems the new shortcuts integrations are quite flakey still. I wish I knew what is going on, but as a third-party app you just “offer” you functions and hope that the Shortcuts app will call it nicely.

Though I could never reproduce these issues, I am right now working on a “local, plain-old-file cache based” implementation of the Shortcuts actions to reduce the possibility of any funky behavior. currently, they check with the backend server if any new data is available before showing the list.

I have noticed (during development with the beta versions though), that once Shortcuts “breaks” with the integration (whatever the reason for that) - it seems to never really re-launch it. you will need to force-kill and restart Shortcuts.

the “fix” should be out later this week, and I really hope it will fix any instabilities in this area.

sorry for the inconvenience, everyone

oh… now that I read you question again… I think I was talking about the wrong thing.

I was not aware of this, but it seems that this is a more common problem (with other apps as well). no idea yet, but I’ll google around…

Sounds good, thanks, still a very new functionality for shortcuts in general, will continue to monitor

Hope this is the right place to ask: Is there a way to (fire/trigger/make happen/acknowledge) an event from an Apple Watch? I’ve been playing around with Pushcut, and I have set it up to log the comings and goings from home and work [1]. After several days of trying to figure out why things weren’t working, I realized I did not have a Default action set up for each. That is now in place, but after several more days of testing I signed into Airtable (Pushcut -> Integromat -> Airtable) and I noticed that simply dismissing the event form the watch doesn’t cause it to perform the action. Is there a way to get it to do so? Or do I need to open my phone?

[1] Is there a way to do this that doesn’t require four individual notifications on Pushcut?

currently, actions (including default actions) cannot be executed from the Apple Watch.

however, I am happy to announce that the next version will come with Apple Watch support.

unfortunately, it will not be possible to run shortcuts or open URLs on the watch (simply is not doable on watchOS). however, it will support online actions and HomeKit requests directly from your wrist. Pushcut will also come with a new “run web URLs in the background” feature that will also work from you wrist (like IFTTT webhooks).

in terms of logging coming and going:
I believe Integromat comes with location monitoring built in - so for this case (if “fully automatic” is what you want), try setting it up without Pushcut in the middle.

one way of doing it with a Pushcut confirmation that does not require 4 separate notifications: you could use integromat location monitorin as trigger, have server-logic that evaluates if it is a “log-worthy” event, you can then send a Pushcut notification “Should I log this?”.

Include the details of the event as Input, and have one “Confirm with Integromat” action that will perform the actual log. I hope you can follow what I mean here.

@Greybeard @sliemeobn I’ve tested the “IFTTT Complication On The Watch” method and it works nicely - so long as you have a network connection.

(Currently it is bottom centre, between my rings and Overcast. The other complication I have is Drafts.)

In fact I’d say it’s a selling point for Pushcut - given you can’t run shortcuts on/from the watch directly.

Have you considered adding some kind of auto snooze feature? Currently I just schedule through shortcuts 3 different notifications, adding 3 minutes to the notificaction time, but it would be great if this feature could be triggered directly from Pushcuts instead.

Good work by the way!

I have it on the list to add a snooze button somewhere in the notification.
you could then select a duration or something like “when I arrive at home”.

is that what you mean by auto-snooze feature?

currently I am still busy with getting the watch app out the door and promoting the whole HomeKit notification angle a bit more, but snoozing might be the next thing I tackle for Pushcut. however, no date yet

Hi @sliemeobn, will it be possible in a future version to add an individual image to the pushcut notification? 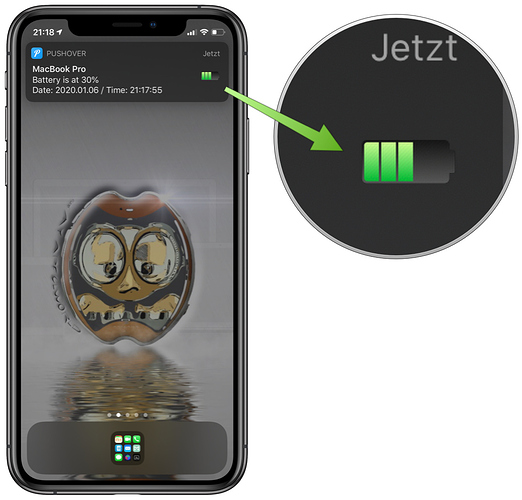 It would be a great visual aid to quickly distinguish the multitude of notifications.

yes, it is definitely intended and not too far down the list!

thanks for reminding me though that people will care about this. makes it easier to get new versions out the door ; )

thanks for reminding me though

Many thanks for your quick feedback @sliemeobn

I am looking forward to what is coming.

A post was split to a new topic: Local Time Trigger with Multi Week Intervals?