Launching apps from Due, how?

[Previously posted on the MPU Forum]

How can I launch an app, like Instapaper, from a link in a Due reminder? Is this possible?

Can I do it through another app if not natively?

You should just need to know the URL scheme for the other app.

See your previous asking of this question here:

Add link to open app in Due iOS

Creating a Due App reminder with link to Shortcut (almost).

As far as doing it from another app, you can use Safari as a launcher to open apps and actions via a shortcut.

I run several from the Favorites bar while in Safari on iPad as I use Safari rather regularly.

Example I once made a post here on using Safari favorites as an app launcher. Didn’t interest anyone else, but that didn’t really matter to me as it’s been very beneficial to me. I am now posting on how you can also utilize this method to launch shortcuts while browsing Safari. Both the method above and this one are most beneficial on iPad but works well on iPhone as well. Also know, running this method opens the Shortcuts app and leaves Safari and does not take in the current webpage as input…

Thanks. I have just tweeted at Instapaper to see if I can get their URL Scheme.

Add a URL to Instapaper:

Prefix the http/ https with an i.
Both ihttp and ihttps open Instapaper and add the page to it.

Can you help? It doesn’t quite work. I put the link instapaper:// in a Due reminder and it doesn’t open Instapaper when I complete it

It won’t open when you complete, but when you tap … though I’ll come back to this.

Go back and look through your emotional diary topic. Note that you trigger by tapping on the title in the app.

Help With Creating Shortcut to do an Emotional Diary Shortcuts

Dear all I am hoping that someone out there can help me out. I’m really not cut out for creating Siri Shortcuts myself, so I’m hoping that some friendly spirit out there will do it for me. I’m starting an emotional diary, which is something that I have wanted to get into for quite a while and I think that it could be really awesome with Siri Shortcuts to do some fast emotional check-ins during the day. This is what I’m hoping to have set up: At the end of each day, I will go in and manually …

Now from my quick test, it appears that Due is being rather picky with the URL. If it only has the protocol and nothing after it, it won’t recognise we want a linked title. So we’ll cheat. I just tried this as my Due reminder title and it worked just fine. 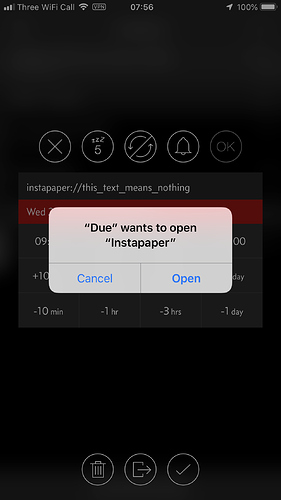 Wow amazing. So I can do that with any app right?

I don’t have Due, so can’t test, but although not all apps have URL schemes, Shortcuts does and can be set up with an action to ‘Open App’ (I think, though am not sure, this works will all installed apps) so if that’s all you want to do (and there’s no URL scheme) that may be a potential workaround, too?

Yes, that is an alternative, and it should indeed list all apps. That actually comes back to a previous query by @andreasl on running Shortcuts from Due referenced earlier.

It’s a bit slower as you have to go via Shortcuts, you have to setup a shortcut, and the URL is arguably a little more opaque. But it is absolutely viable.

If it’s being expanded, and someone who isn’t a Due user wanted to do something similar, then other apps like Launch Center Pro, Scriptable, PushCuts and even messaging services capable of delivering actionable URLs from scheduled/triggered web service pushes could similarly offer further options for how people can open an app via a notification on something. In fact Siri’s “remind me of this…” feature would have something to offer too.

@sylumer could you help set up similar links to just open these apps: Reeder 4, TweetBot, YouTube, Facebook and the Music app?

Okay. One very quick Google search for each app name with ‘url scheme’ seemed to give info in the top handful of results each time.

There really is nothing more to it than a search in your preferred search engine except to type them in. More often than not, you can have a really good guess at what it would be and be spot on.

For example. If you wanted to open an app called “automators”, it is always worth just typing something like “automators://” into the Safari location field, and seeing where it takes you

I don’t actually use most of those apps above so I can’t test them for you.

Thanks! I’ve been able to find most of them… I’m on the hunt for one that will open the Alarm section of the Clock app.

I found this one online: clock-alarm://

There isn’t a URL scheme to do that, but if you want to create or toggle an alarm, then you could create a Shortcuts shortcut to do so, and trigger that shortcut by URL scheme.

How do I go about opening the Alarm section of the Clock app with a Shortcut? I’m such a noob at this.

You can’t. What I said was that you can create or toggle an alarm using Shortcuts.