Hi - I’ve written a shortcut that uses speech recognition and it works fine when invoked through the touchscreen but fails when invoked by Siri - can someone please tell me if they know why this isn’t working, and if there’s a workaround? Also, if there are things I could be using to debug this that I don’t know about (I’m new to shortcuts and am not a programmer) that would be welcome.

I’ve named the shortcut “inbox” and all it does is invoke speech recognition, then pass the resulting text to an email sent to a predetermined (fixed) recipient with a fixed subject line.

As I said, when invoked from within Shortcuts, or via the shortcuts widget, it works fine every time. I’ve got Siri enabled for this shortcut, and when I invoke it, Siri says it’s running my shortcut “inbox”, and then hangs. TBC, when using Siri, it never presents me with a visual or audio cue indicating that it’s ready to accept dictation. After a bit, it either abruptly opens the shortcut app home screen and stops, returns to the app I was using when I invoked Siri, or gives me the error “Recognition Unavailable. Speech recognition is not currently available. You may need to connect to the Internet”. Internet connectivity is not a problem, because, under identical conditions, it consistently functions when invoked manually, and fails when invoked by Siri.

I would like to be able to dictate using a Siri shortcut but am having some problems. When I run a script with Dictate.start() using Siri, Siri responds “Sorry, there was a problem with that app.” Is there a solution to this? Thanks!

Thanks @sylumer it DOES look the same.

Looks like the advice in the Scriptable example was to check “always run in-app”, but I don’t see a similar toggle in Shortcuts - do you know of one?

Try Continue Shortcut in App. See if that works around it. 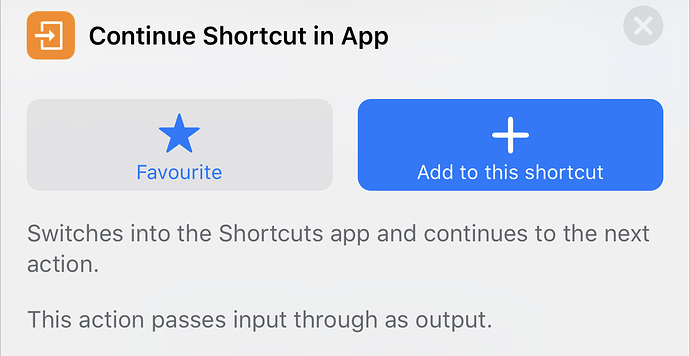 That did it! Thank you!

Glad that it was an easy fix for you.