I would like to be able to dictate using a Siri shortcut but am having some problems. When I run a script with Dictate.start() using Siri, Siri responds “Sorry, there was a problem with that app.” Is there a solution to this? Thanks!

It should be using the Dictation object. When run you should then get a couple of access prompts if it does not already have access.

Here’s a quick example where I dictated a few numbers. 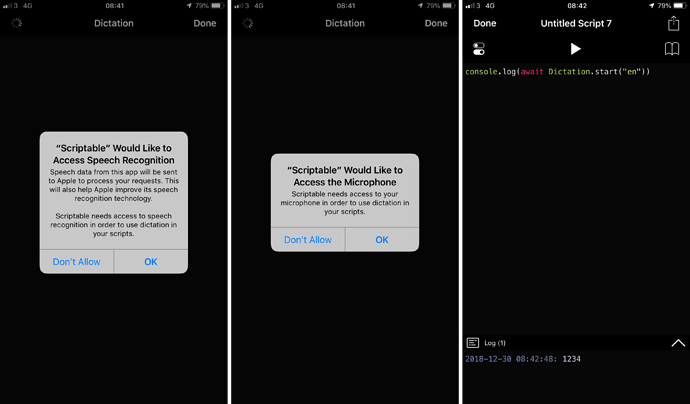 Thanks for the response! This specific example shows dictation being used in-app, whereas I would like to be able to use Dictation after invoking a Scriptable script from Siri. I have responded affirmatively to these prompts and I have confirmed that dictation works in-app.

Ah, so you are trying to use Siri dictation whilst already ‘within’ Siri. I don’t know the details of how things are coded, but I can imagine that you might be hitting an OS level lock on Siri - particularly since it is an OS level error that is being displayed and not a Scriptable specific one.

I don’t know if Simon could code around whatever occurs, but if you change the switch on the Scriptable script’s setting to enable Always Run in App, Siri will push you into Scriptable, at which point that will terminate the existing Siri interaction, and your Scriptable script will then pick up as normal.

Yes it does, thanks!

Unfortunately it’s not possible to perform dictation from within Siri. As @sylumer points out, this is a restriction in iOS. The best workaround is to use “Always Run in App” and then let’s cross our fingers that Apple opens up for more actions to be performed from within Siri in the future.