"Record Video" in iOS Shortcuts has a 10-minute limit

Well this was an unpleasant surprise.

I was using a variation on this Shortcut I shared awhile ago to record video this morning (see image below, left) and after exactly 10 minutes, I received the error-message show I’m the image below, right. 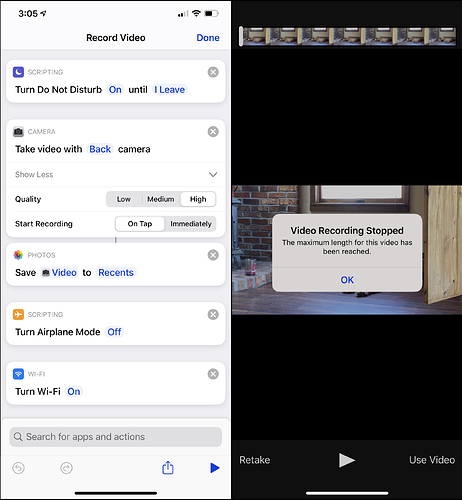 I tested it again this afternoon, and had exactly the same result: when using the “Take Video with Back Camera” action in iOS’ Shortcuts app, it will stop recording after 10 minutes.

As far as I can tell, there is no documentation about this or warning about it. A google search didn’t turn up any discussions about it, so I assume it must not be widely known (unless for some reason it’s just me).

Recording a video without using Shortcuts allowed the video to go on seemingly as long as there was still free space on the iPhone.

This is a real shame because I had adapted the Shortcut to automatically save the video to Dropbox when it was done, but if it’s limited to 10 minutes, it’s not really useful to me. I’ll edit the shortcut to end with, instead of “Take Video” just an action to open the Camera app.

on this one, Apple.