That’s exactly how I use scriptable too. I run a shortcut when I get to work, and among other things, it schedules notifications in scriptable linked to another shortcuts that I run through the day.

For example, The shortcut looks for my scheduled lunch time, pass it to scriptable that enables a notification 5 min before the lunchtime, so when the time arrives I got a notification, and then I’m able to run the lunch time shortcut.

I hear you guys, and I see a feature there. It should be simple to add URL support to “schedule” a notification with an x-callback-url.

for your lunchtime example: I think I would still prefer to create a zapier or ifttt thing that triggers 5 min the lunchtime calendar event - any reason you do not like this approach?

Well… I haven’t really test the ifttt/zappier approach. I just prefer to manage it offline I think (which I do not know if it’s possible with ifttt).

I also set repeating notifications within an interval of 2, 4, 6 and 8 minutes, or until I pay attention to it, and then delete the notifications not delivered. This way I’m pretty sure that I don’t skip it. I guess that it would be possible with ifttt…

Congrats on the launch of the app! I’m not a programmer, but have been testing iBeacons at home. Will this work with an iBeacon?

I am currently adding schedule and location-based triggers to the app and expect to have a version out early next week.

iBeacons will not be included in the first round - but from what I saw basic support for them would be REALLY simple to include. 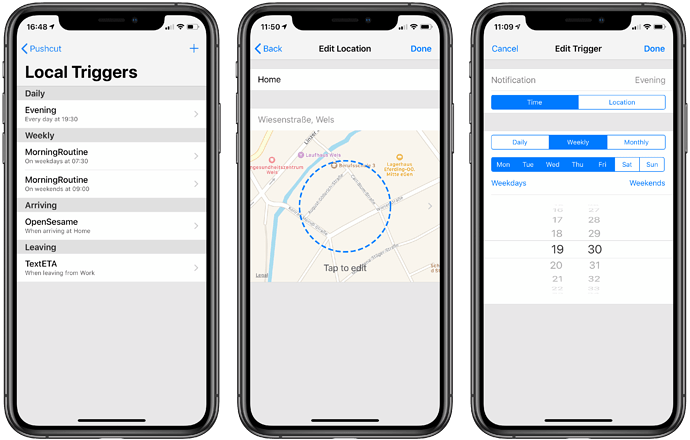 I really do believe this opens up Pushcut to a much wider audience - thank you automators forum for pushing me in this direction : )

local trigger conditions:
I am thinking about stuff like “Every day 7.30 PM, but only when I am at home”, or “when I leave work, but only after 1 PM” or stuff like that). I have not seen this anywhere yet, but I know exactly how I can build it - should be fun ^^

Congrats on this release! Looks great!

A quick thought on next steps. I would be careful in advance of WWDC. Shortcuts is almost certainly going to be pushed further than its current state and I wouldn’t want your efforts to be Sherlocked.

Hard to be clairvoyant, of course, and I wouldn’t want to put the brakes on good momentum. Just something to consider!

I can’t wait to see what WWDC will bring, not really worried though.
whatever is in store for us, I will do my best to add functionality and value around it ; )

Congrats from me too!
That makes it a lot easier – and it works flawlessly! Thank you for your work! Great app!

I am excited now! Those conditional triggers, oh my…

conditional triggers and iBeacon support are in and ready to go.
anything missing?

Pushcut now supports local triggers like: “every weekday at 7.30 PM, but only when I am at home” “when I leave from work between 4 and 8 PM” [Image%206] And, as requested by a few Automators, I also added support for iBeacons. I know everybody (including me) is busy drooling about iOS 13 shortcuts - but I think this allows for pretty cool automation as well ; ) Let me know what you think!

A local trigger - invoked by a timer pop - worked fine.

However, it’s a royal pain in the neck to set up a timer pop just to test a Pushcut cut. You have to set it for 1 minute later and wait.

So, can we have a URL scheme to do it? Or else a “test me now” button?

Hi Martin, thanks for the feedback!

About the testing: There is a “Test Notification” button directly in the notification editor toolbar - is there a chance you did not see that one? Or are you talking about some other means of testing?

About the URL scheme: I might add that in the future, but with iOS 13 coming I want to get a good shortcuts integration done first - with “proper” shortcut actions.

Thanks Simon. I’m embarrassed to say I hadn’t noticed that.

I was trying it from the Triggers screen - where I still think it would be useful to have the button. Maybe call it “Do it now” or “One time” or somesuch.

And I understand about the URL scheme: This is the season where developers sneak stuff out while they’re procrastinating on iOS 13 support.

Here it is: iOS 13 comes with support for local scheduling through Shortcut actions:

I posted about it here:

I am having difficulty with my iphone 6s and getting the list of pushcut actions to show up within ios shortcuts. On 13.1.1 now. I do not have this issue with my ipad on ipados 13. If you have any ideas for troubleshooting, that would be great. Overall I really like the app, but this has been slowing my ideas for further development, especially with my iphone being primary device.

I had to go into the ios settings for Pushcut>>Siri & Search>> enable the “learn from this app” which I think is what “enabled” them within shortcuts. Worked for a little while and then not again.

Not sure if this is a shortcut donation integration issue…

thanks for reporting this!

it seems the new shortcuts integrations are quite flakey still. I wish I knew what is going on, but as a third-party app you just “offer” you functions and hope that the Shortcuts app will call it nicely.

Though I could never reproduce these issues, I am right now working on a “local, plain-old-file cache based” implementation of the Shortcuts actions to reduce the possibility of any funky behavior. currently, they check with the backend server if any new data is available before showing the list.

I have noticed (during development with the beta versions though), that once Shortcuts “breaks” with the integration (whatever the reason for that) - it seems to never really re-launch it. you will need to force-kill and restart Shortcuts.

the “fix” should be out later this week, and I really hope it will fix any instabilities in this area.

sorry for the inconvenience, everyone

oh… now that I read you question again… I think I was talking about the wrong thing.

I was not aware of this, but it seems that this is a more common problem (with other apps as well). no idea yet, but I’ll google around…

Sounds good, thanks, still a very new functionality for shortcuts in general, will continue to monitor