If you had just one automation wish for iOS13

We’re coming up on mid-February and I’ve started to hear iOS thoughts coming through in some of the podcasts I listen to, so I figured it might be fun to post an open question for everyone on iOS13 and automation.

Q) What is the #1 automation related thing that you would love to see released in iOS13?

I look forward to reading about some interesting and awesome suggestions.

Ok, I’ll bite.
Shortcuts that can be set to run automatically in the background without manual triggers based on a date/time, event or location. It’s frustrating to pay as much for an iPhone as a MacOS product and not be able to take advantage of something that’s core to the Mac (and other OSes).

I’d love to be able to port my bash scripts to ios.

To build on the “cron job” requirement - which I also supported - above, I’d like some level of not needing to confirm things. Maybe for trusted actions.

Probably in the form of the first time you run something you agree that it is trusted hereafter.

A bit of a stretch as social engineering will get people into trouble - “The first time you run this nasty-but-harmless-looking-thing you will need to OK it and then you won’t be troubled again.”

Maybe this is indeed as impossible as a lightsabre, but I’d like to be able somehow to develop shortcuts, or maybe even just debug them, on a larger screen than a phone that is not an iPad.

Native support for updating shortcuts: “This Shortcut has been updated by the developer.

My shortcuts Cronios and GeoCuts can do all of this today. You can also trigger shortcuts to run automatically from your iCloud-connected devices like Macs, Apple Watches, and even iCloud.com using WatchCuts.

Sure, these features aren’t built-in iOS, but you can still take advantage of them today.

Security is definitely a concern when you have shortcuts that run automatically in the background. All of the ones that I’m running via Cronios, WatchCuts, or GeoCuts were developed by me. I’d scrutinize very carefully any third-party ones before adding them.

Over the course of developing these shortcuts, there are other concerns that Apple needs to address if they ever add automatic running of shortcuts, such as:

It’s certainly not a trivial problem, and I can see why Apple hasn’t added this feature to iOS yet. With my shortcuts, we can at least see what having automatically running shortcuts is like without having to wait for Apple.

A big one would be shortcuts that take arguments and return values like programming functions. Using the clipboard is a massive hack; something much cleaner would lead to the possibility of reusable, composable, shareable functionality.

A big one would be shortcuts that take arguments and return values like programming functions.

Presumably you mean something more specific here as Shortcuts does support x-callback-url and can take an input and return a value. I use it regularly from Drafts for example.

OK, not ONE thing, but here are my thoughts…

#1 - Global Variables - I use a lot of “sub routines” using the “Run Shortrcut” action to do things like gather Github credentials and set tags on blog posts. Right now, I run the sub routine and save to clipboard. Then I return to the main Shortcut and set the clipboard as a variable. It’d be nice to set the variable in the sub routine and return to the main Shortcut and call that variable.

#2 - Watch App - bring back the watch app! I used to have a set of Workflows on my watch for tracking caffeine and water, putting my Mac to sleep, and a few other things that I could use as I wander around the office. Now, the only way to do it is with voice, but there is no interaction (i.e. “Choose from Menu”) with voice

#4 - Home Screen Widgets - Allow me to save widgets to the home screen as icons, and run the entire Shortcut in a home screen pop-over instead of opening the app (similar to the way it runs in the Today view)

Regarding (1), you could pass a global variables dictionary to the sub-routine and return a modified version back to the main shortcut when exiting.

I wish my Apple watch would put my Macbook Pro into sleep mode when I step away from the computer.

OK, not ONE thing, but here are my thoughts…

You had one job…

Wouldn’t this all still go through the clipboard?

No need for the clipboard. See these screenshots as an example: 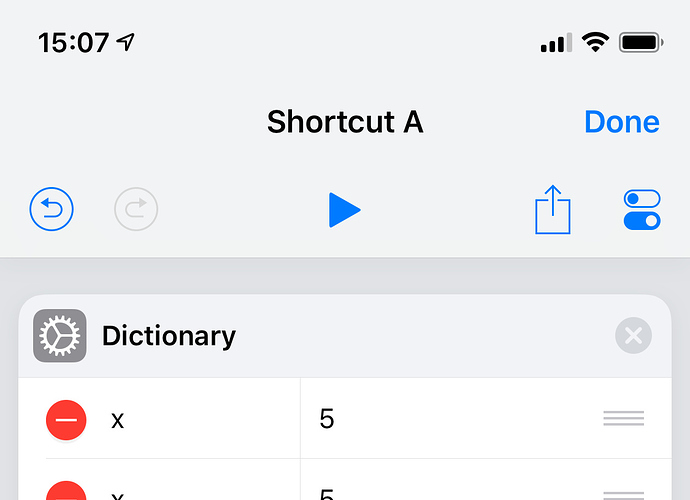 Running A will call B with a variable from A. B changes it and returns it back to A, which reassigns the variable to the value of the returned dictionary. No clipboard needed when going between shortcuts.

Aah, got it. You’re just sending the dictionary as the input to the next shortcut, editing it in the “subroutine”, then sending it back. Clever…

Cheating because some of my most-wanted features are already listed here (time/location based shortcuts, for one).

To take it a step further, I would love to be able to dynamically generate menus in shortcuts using similar criteria.

I know Launcher (I think that’s the app name…) has some capacity for this but I really do like running shortcuts from the widget so that I don’t get all the bouncing around for the menus etc.