How to schedule an iMessage text using Shortcuts?

Hello all,
I’ve recently transferred from Android to iPhone and hands down the biggest issue I’ve had is being unable to schedule texts to arrive precisely at the date and time I want them sent. While easy to do with Android phones, it appears near impossible with iPhone. I’ve written a Shortcut that should work but requires the Shortcuts app to be open and on the screen the entire time (making the iPhone unusable if I’m trying to schedule a message a couple days in the future). Locking the iPad/iPhone automatically turns off the Shortcut and opening up another window causes the Shortcut to time out in less than a minute. Additionally, when running this Shortcut, no other Shortcuts can be run.

Couldn’t embed more than one image but hopefully this image gives perspective on my solution: 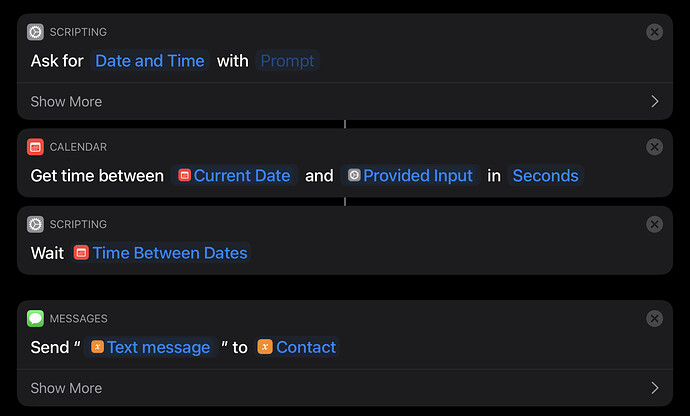 My attempted solution is similar to another person’s Shortcut here: Delayed Time iMessage - Siri Shortcuts
But both of ours suffer from the same three limitations mentioned above.

My proposed solution/hope is that Apple will allow either:

Is there any workable alternative? I’ve been trying to figure out a solution for several hours now and can’t seem to figure anything out.

Please help guide a novice Apple user to the light! Even sympathy is encouraged, as trying to figure this out and failing has been frustrating

Here is a full documentation of my Shortcut as 3 replies (still limited to 1 image per post): 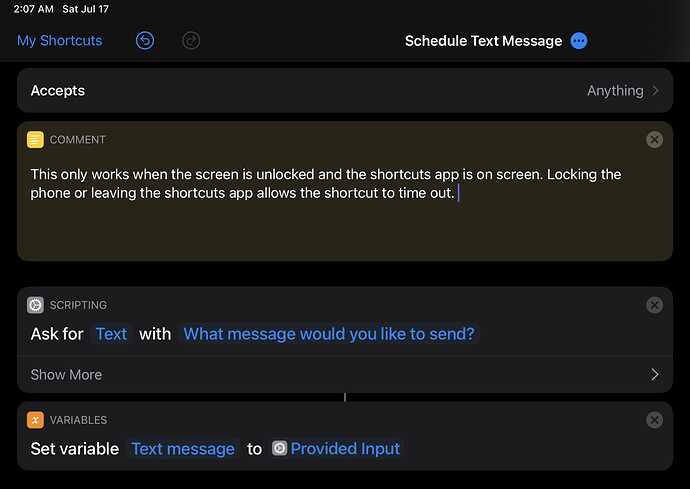 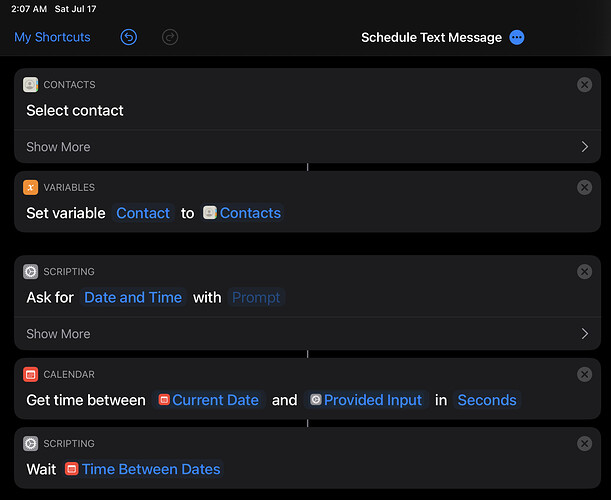 Is there any workable alternative? I’ve been trying to figure out a solution for several hours now and can’t seem to figure anything out.

This has come up on this very forum at least a couple of times for different Apple platforms.

After seeing a request for ideas on scheduling sending a text at a later date by @Tjluoma, I thought I’d share my i*OS version (the original request was cross-platform with a predominantly macOS need, hence the new topic) that uses Shortcuts, Data Jar and Pushcut Automation Server. Originally, I had a Shortcut automation version, but that meant creating a series of timed triggers that would run to see if any messages were in Data Jar to send. This version submits an entry to Pushcut Automation…

I have some people who it is best to contact via text message. The problem is that I sometimes think of things at night when I don’t want to text them, so I’ll put it off for the next day. If it was an email, I could write it and schedule it to send later, or just stick in my drafts. With a text… I don’t know what to do with it. I suppose I could write it in Drafts and just send it the next day. But are there other ideas? Ideally I’d like solution that I can use on Mac and iOS. I know there …

Thank you @sylumer for pointing me to these forum posts! Although I Googled this issue, these particular posts for scheduling a text didn’t show up.

Ultimately, the method outlined by @Tony is economically unfeasible for me as it seems to require an additional iPhone that is dedicated to working solely as a Pushcut server. Plus Pushcut appears to have a subscription cost to maintain that server. Although this method would allow me to choose the precise date and time I want to send a text, so it is the most superior of the options you’ve pointed me towards.

However, the method @Chrisp outlined on his (awesome-looking) website Delayed Texts with Apple Shortcuts · Chris Pennington using DataJar, 2 shortcuts, and 1 automation at a specific time works for me. It’s limited by only being able to schedule out a week in advance and only being able to be automatically sent at a specific time each day, but I’m content with these limitations.

Thank you very much for pointing me in the right direction!

PS. Of note, Chrisp’s shortcut 1 didn’t work when I downloaded it. I rewrote it and it works like a charm:
1. 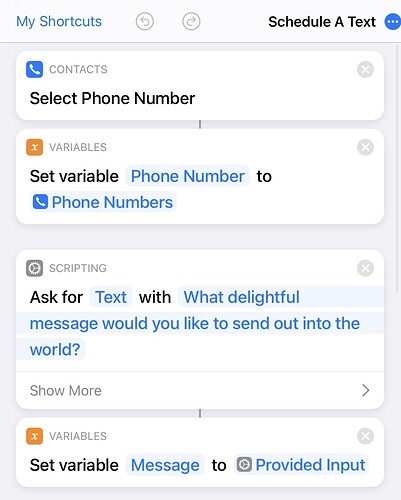 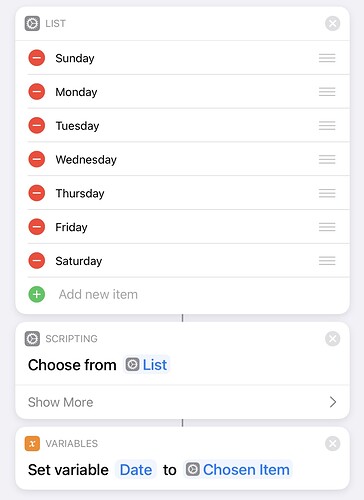 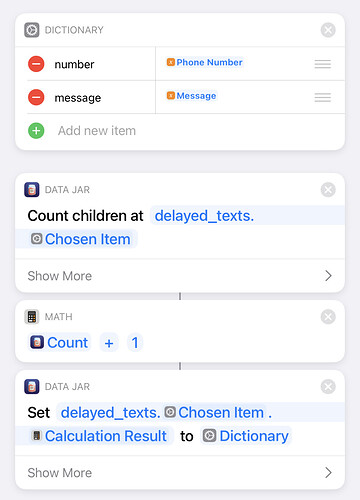 @Josh_95, so glad it worked out for you! Sorry for the trouble with the first shortcut. I haven’t actually used this in some time, so I haven’t kept up with it. I may give it a bit of a second go-around when I get a few.

(Glad you like my blog! It’s been a fun little project.