I set up a simple “Choose From Menu” menu - with two items in.

I wanted to pick up the Menu Result from this to feed into the experimental ToolBox Pro “If Or” action.

I don’t see the Menu Result being acted on in the If Or action. If I stick a Notification action just after the Choose From Menu action it doesn’t get filled in.

So I don’t think this is as @mralexhay’s problem.

Should I be able to use Choose From Menu to simply generate the choice’s text?

If not, how should I use If Or as a simple menu system?

Menu will run a set of actions based on choice and return the result of those actions for the menu result.

I wanted to pick up the Menu Result from this to feed into the experimental ToolBox Pro “If Or” action.

Also good to know that action is in beta

- I suggested it on another thread, but I think I was dropped from the beta list at some point around the release.

I think @sylumer is right here but happy to take a look if you post the shortcut?

@sylumer, this is what the tool currently looks like: 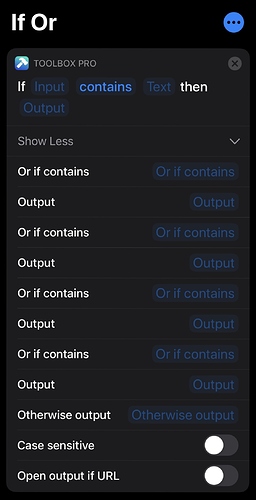 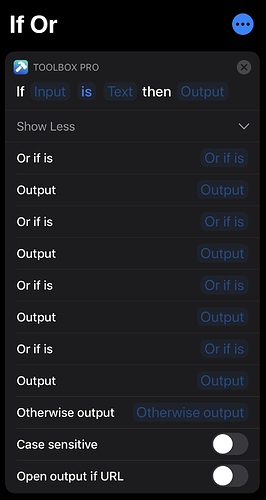 Thanks everybody. That was it. I used Choose From List and it works fine.

One “this is still early beta” thing: If I have a URL and I select “Open output if URL” it currently takes me to Toolbox’s UI, and doesn’t open the URL.

Also it would be lovely if a URL was colour coded. I’m impressed “http://” doesn’t need to be in the URL but it’d be a nice touch to show “URL recognised as a URL”. Just a thought.

(And when you write this up @mralexhay you might want to help everyone learn from my mistake.)

Thanks for sharing the screenshots.

In the switch/case action you were prototyping, you were incorporating action steps (just comments in your screenshot) as part of the case. It was that structure that prompted me to suggest the if-or action based on actions occurring.

The standard If-else action has two sets of actions it will run depending upon if a match is found.

I was envisaging rather that the if-or producing an output, it would be more aligned to your case prototype. Forgive the very crude attempt (I’ve used an amalgamation of some screenshots to try and illustrate more how I imagined it might look based on your case action). This would then very much be aligned to an extension of the if-else. 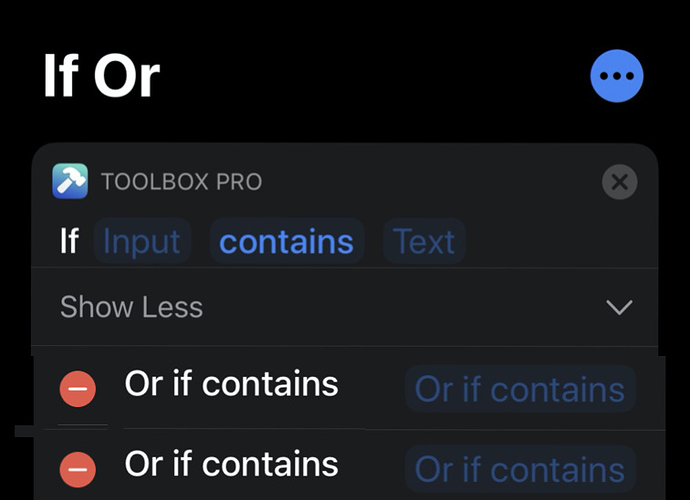 Thanks Martin, the open URL toggle is half-baked at the moment. I need to add the code to open the actual URLs and also the ability to recognise App URLs.

Hi sylumer, this would be my absolute ideal but developers can’t add the If/Menu-like UI that directly affects the order the blocks are run in unfortunately. All I have access to is a single parameterised block that can produce output.

I think the solution I’ve built is the best I can do with the tools I’ve got at the moment unfortunately!

Right. I appreciated that. And colour coding of a detected link?

The switch/case action you had posted about is also a no go then as that also would suffer an identical limitation, correct? Because it was that very aspect in what you posted previously that lead me to suggest it.

Yes that was more of a concept of what I wish was in Shortcuts rather that what I’m able to build I’m afraid!