Am I right in thinking that @sliemeobn 's Pushcut is the only game in town when it comes to Webhooks triggering automation?

I created one with Pushcut and got IFTTT on my Watch to trigger a Pushcut notification. It merely said “Hello” but it could do so much more.

This seems a reasonable workaround for not being able to kick off Shortcuts from the watch.

The notification service I use is Pushover. Pushover notifications can be triggered by post requests (in effect a type of webhook). But, you have to open the notification to then show the actionable URL to be able to run it and have a shortcut launched. 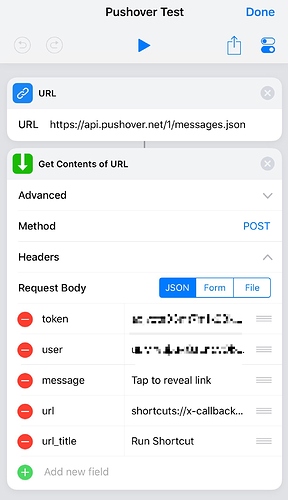 Thanks. Help me out here:

How would you position Pushcut against Pushover?

(I’m subscribed to the former; The latter is a single in-app purchase I’m OK with paying - if it plays a largely complementary role.)

I would say Pushover has broad multi-platform broadcast utility while Pushcut is tailored for an improved Shortcuts and i*OS experience around this particular remote trigger of a shortcut feature. Pushcut obviously also has local scheduling, etc. which is out of scope for Pushover.

Thanks. So unless I need it for Mac I should probably stick to Pushcut. And use the shirt out of it.

If you are just focused on using it for Shortcuts, then I’d say it would be a better experience.

Also, a bit of a sneak peak of the planned future features:

The problem with the Watch:
you can’t run shortcuts on the watch, and you can’t open app urls on the watch (afaik).
but for webhooks, online actions, and HomeKit it should work just fine.

any thoughts - do you think an watch app will be to confusing if only “half” the actions work on it?

If your watch app could run stuff without needing the web it would be a net win. Depends, of course, on what couldn’t be done with it.

(Webhook is a workaround - with latency and connectivity issues. We’re back to my “testing at 35,000 feet” thing.)