In Episode 66, there’s a discussion of using virtual switches in Homebridge for automation and I would love to learn more about how I could use this. Would anyone who’s using this care to share an example of how the switch triggers an automation or works with an automation?

Here’s one thing I use them for.

I’m have a Plex server on my lowly Raspberry Pi. It has enough power on it to stream 4K media.

But, it sometimes just hangs during the day and won’t stream anything. So I scheduled it to reboot regularly (every 8 hours) and that worked well.

Of course I did’t want it to reboot while streaming so I made a dummy switch called “KeepAlive”. I changed my reboot script to check the switch’s value before doing a reboot.

I could manually turn on the switch before I stream anything but we’re automators. We don’t do that. So, now I have an automation on my Home Assistant instance that turns on the switch when something starts playing and turns it off when it’s idle for 30 mins.

What are you using the for scripting? Applescript? Shell script? Keyboard Maestro?

I use a shell script for the reboot script. Here are a few more details of the setup.

Using HOOBS I did this so family know if I am home. You can do this for other family members. 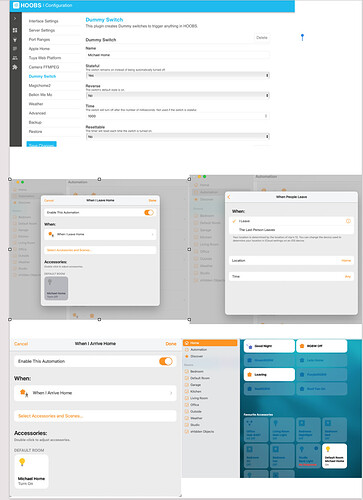