Use Hazel and Automator to convert image while retaining original

I’ve got a weekly talk that I do, and I need to update the title card each week. I export the Keynote slide to .tiff (since my understanding is that’s the best to use in terms of adding media to iMovie), but I need a .jpg to use as the thumbnail in places like YouTube or Facebook.

For weeks now I’ve been taking the file, adding it to Permute, and then letting it sit there until I need it.

What I’m wondering, though, is how to create a Hazel action that will monitor that folder and then run an Automator workflow on it that will retain the original while giving me a converted JPG for use as a thumbnail.

I understand this may be kind of “rube goldbergian”, but I can’t tell how to both duplicate a file, retain a copy, and convert the duplicate.

Thanks for any help anyone can offer! 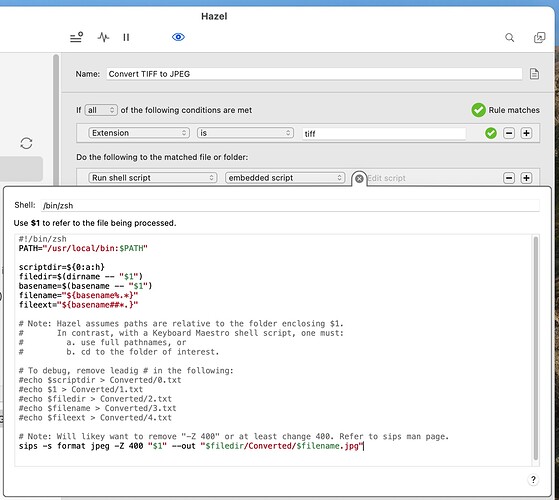 Note that this script assumes that the folder containing the TIFF files includes a subfolder named Converted.

Thanks, I’ll check that out. I don’t normally run scripts like that because even Automator sometimes seems a bit too advanced, but maybe I’ll give it a whirl!

maybe I’ll give it a whirl

@monster94, give it a try and if you have any questions, please don’t hesitate to ask. Here’s the basic outline:

I regularly end up with a folder full of GIFs. My guess is this approach could get me them all converted to JPEG - with quite a lot of control over eg sizing.

this approach could get me them all converted to JPEG

@Martin_Packer, yes. I suspected there would no issues with GIF’s, but I did a quick test anyway. It worked as expected.

The shell script can be used as-is unless of course you want to adjust the size of the output JPEG. (The sips man page includes the transformation options.) 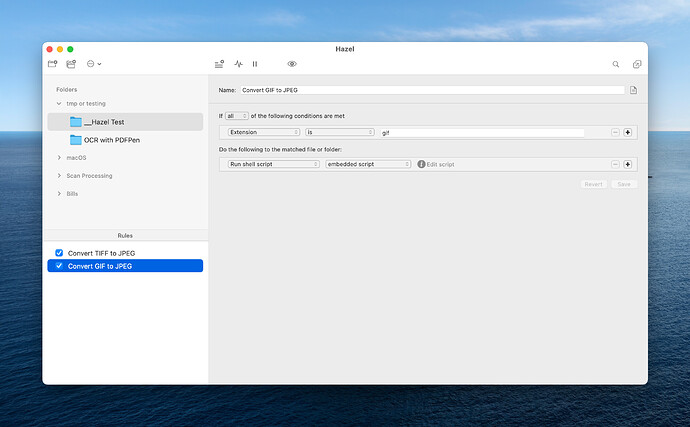 This works perfectly, thanks! One question. When Hazel runs the script, it will convert a .tif file (for example a file that is 1.5 GB) into a .jpg file that’s 42 KB. What’s the command in the script that is converting it to that particular size of file? I’d like to have the .jpg file end up larger. For example, what would I change in the script to convert 1.5 GB file to a 1.5 MB .jpg file?

What’s the command in the script that is converting it to that particular size of file?

It’s the sips command. You can access the man page from the Terminal app to get all of the possibilities:


For the -Z option, here’s the information:

You’re welcome. Hazel with shell scripts and/or AppleScript is a powerful combination. If you want to go far beyond the native macOS script/command capability check out the possibilities with Homebrew.

This is what I ended up cooking up. The “MP - Title Card” gets created weekly and deleted automatically by Hazel after a few days. This folder action works and keeps me from going into an infinite loop, which happened recently.

I guess what I need to do is set up a hazel action to look for this folder to be created, run the action on it, and then it’ll be set.

Thanks to everyone for their input and feedback! I guess it spurred some wondering about other things to do? 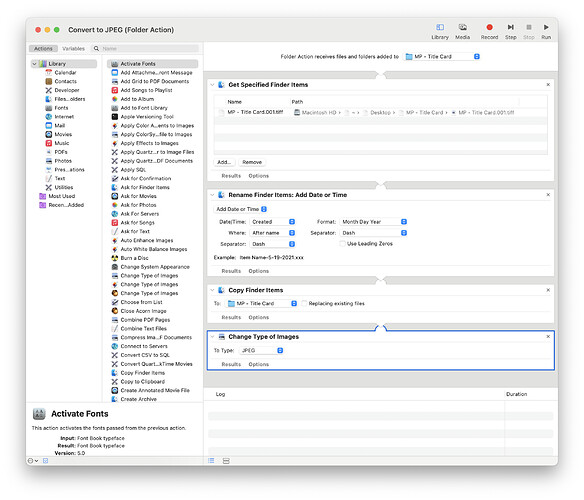 This is what I ended up cooking up.

Coincidentally I was thinking of suggesting an Automator Folder Action for those that don’t have Hazel.

I like the sips command because of its many capabilities.

Thank you for this @jim_sauer. I’ve had Hazel for many years. Am just starting to explore the power behind it.