I’ve been working on a shortcut for a little while and I was struggling with one part of it so I started a new shortcut to try and nut it out but it’s still not working for me so now I’m reaching out to all of you.

What I’m struggling with is getting input from the user and passing it to the Twitter Search action. I get asked for input and the Twitter app opens but no text is passed in and the search never happens.

Has anyone use this and got it working? Whats the secret?

You’ll need to pass the search term via Twitter’s URL scheme like so. 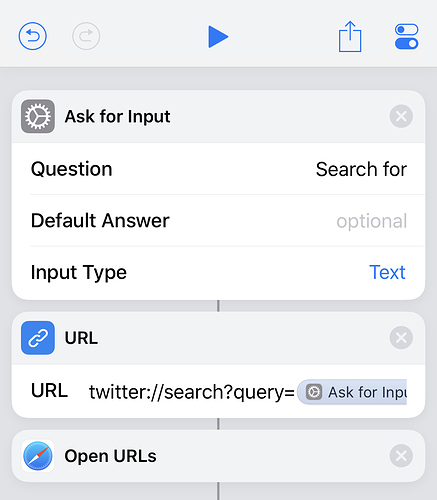 Sure that would work but if you look there is actually an action called Twitter search. That’s the one I’ve been trying to use. It only just occurred to me that perhaps it is working correctly. Maybe it was only ever meant to open the Twitter search page in the app.

Edit: I’ve just checked and the description of the action says “This action passes input through as output” so I’m not using it wrong.

That action only presents Twitter’s Search interface rather than doing a search. It’s not really a built in action in Shortcuts but rather an action donation from Twitter to Shortcuts. Donations cannot accept parameters. At least not yet. iOS13 will allow app actions to accept parameters.