The Scriptable app is not working on my device

Hi, I have an iPhone 11 running iOS 13.2. The Scriptable app is showing in blank (that means without any of my scripts) since around Monday.

If I try to create a new script it will show the scripting page but it will not let me type any text in it.

I’ve tried restarting force restarting the app, restarting my iPhone, deleting the Scriptable folder from the Files app and redownloading the app and none has solved this issue. Has anyone experienced the same problem or know how I might be able to solve this?

Edited my previous post because you did try all the solutions i mentioned already.
I’m on 13.3 Dev B1 and it works there but maybe you can ask the developer of the app @simonbs

This issue might occur if your iCloud Drive is completely full. In that case Scriptable won’t be able to create new files and it might not even be able to show the list of files.

I’ll add it to my todo to improve the error handling in these cases. However, it’ll always cause some problems. 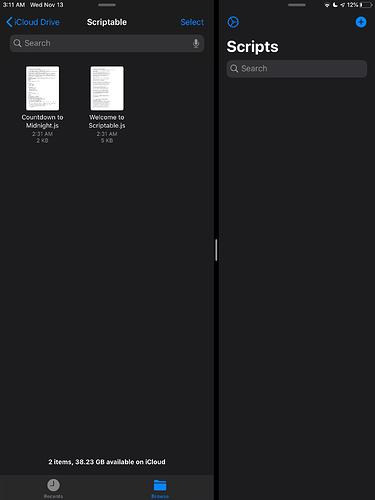 Same issue. I see nothing in app. iOS 13.2.2 on 2018 iPad. I see the files in Files. But nothing in the app works. Editor opens but can’t edit anything. Adding examples just shows spinner forever (the files are added if you check Files though)

I have 38gig free. Not a space issue.

Reinstall and deleting iCloud folder has no effect.

Take a backup of your Scriptable files just in case, and then try creating a new script in Scriptable. Does it appear in Files?

I’m just wondering if trying a fresh interaction might throw up some additional information about what’s happening.

No. As I said I’ve deleted the folder. Deleted the app. Reinstalled. Same behavior. Cloning one of the examples will appear in files. But inside the app you only see an infinite spinner. And relaunching the app is stilll empty.

Just to clarify, I wasn’t referring to cloning any existing (example) files, but creating an entirely new one from within the Scriptable app.

If I try to create a new script it will show the scripting page but it will not let me type any text in it.

Creating a new one is same result as original poster. 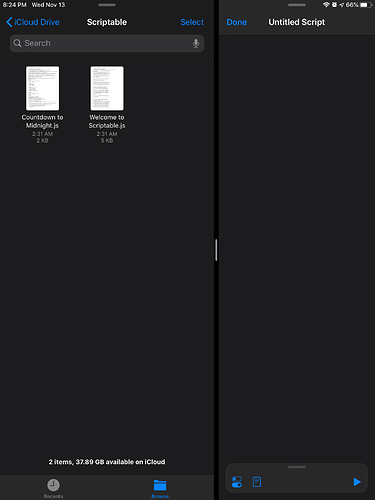 No cursor. No keyboard. Touching edit area does nothing. And no new file in Files.

Did you ever get it fixed / working again? I’m having the same problem. No matter what I do…

Interestingly enough it works on my phone… just not on my iPad. Weird.

Yes but I couldn’t tell ya what I finally did to fix it.

It is definitely a real problem though.

I had the same problem, but was able to use scriptable again after disabling the toggle after scriptable in the iCloud preferences. (Preferences -> Apple ID -> iCloud -> Scriptable).

Obviously this isn’t ideal (no iCloud sync) but at least I’m able to use it again. I have enough space on iCloud.

For what it’s worth, Scriptable isn’t the only app that seem’s to be succumbing to iCloud access issues in regards to recent i*OS releases. It strongly suggest an OS or service-level issue. Hopefully we’ll all get an update soon that rectifiers these intermittent issues that often seem to target individual devices.

I had an iCloud access problem with Pythonista. Came out of nowhere, and resolved itself within a day before I had time to troubleshoot.