TLDR; how do I automate Analog to digital input from Rocketbook to calendar/omnifocus/roam research?

I’m trying to dip my toes back into automation (after a couple of failed attempts)…I noticed that friction is my main problem to put anything into a task manager (Omnifocus) or notes app (Roam Research), and that my most successful task lists are on paper. But of course future tasks don’t leap of the page when I need them tI (bullet journal might help but it’s a lot of rewriting). I realise that reviews are a good thing, but somehow I’m stuck with the idea that I want to “touch” a task once until I have to do, not constantly make a decision about it (decision fatigue). Anyway, long story short, I thought if I use a Rocketbook to take notes and write down tasks (low friction) I can then send via email to myself (transcribed into the body or as a .txt file) and then re-distribute where they need to go (calendar, task manager, notes app).

The resulting text is a bit messy, but with a bit more careful handwriting probably usable (see below). My question is, how do I automate this? Ideally I’d like the email to be parsed and then the different sections be distributed to the different apps. Is that possible? Or would I need one email per app? Is it better to have a .txt file that can be mined or an email body?

Many thanks for your help!

Sample text from email body:
This is a bullet.
o This is a todo
This is
#hashtag
a link to [[ Roam]]
This
is
Another [[link]]
Wash the car next Friday
Try to understand Deleuze and
Derrida. And de Saussure.
And différance

So Rocketbook have introduced a feature called Smartlists in their iOS app which allows you to draw hollow boxes down the left edge and the text from each line will be parsed as a task into a task list of your choice within the app. Whilst this looks like a good start, it doesn’t seem to have a way to export that information as a task to another app, and each task must be on a single line. Also it doesn’t do anything like recognizing dates etc.

Definitely worth reaching out to the Rocketbook developers to see if they could expand that functionality.

Thanks for your reply, @Ourstanley!
Yes, those smart list for tasks seem to work fine, they’re just a bit useless inside the app - if Shortcuts could extract them and send them to Omnifocus, however,…

I realise my question was too convoluted, so, the simpler question might be:

How do I extract text from either a .txt attachment or the email body itself to send to different apps, such as Omnifocus, Roam, Calendar?

e.g. I could use Taskpaper format in handwriting, and if it is transcribed correctly, parse the text from the e-mail body or the .txt file and have it added to Omnifocus - defer dates, projects, tags etc already included

Would this be possible with Keyboardmaestro, maybe?

Update: I checked with Rocket, they’re currently not interested in Shortcuts integration or exporting the to-do list to other task managers.

but, here is a proof-of-concept, that sort of circumvents the Rocket app and instead uses the app Pen-to-Print. 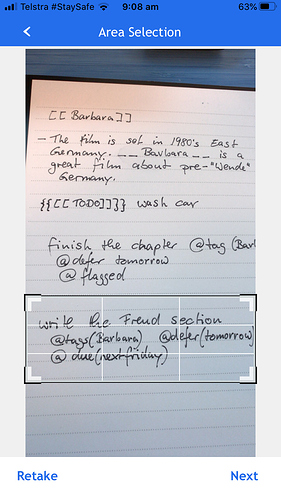 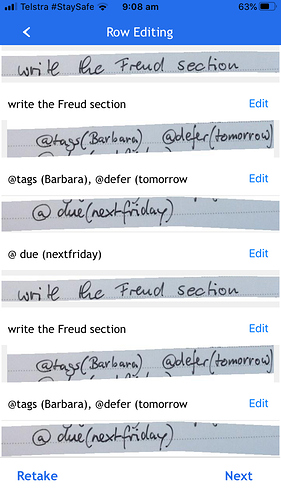 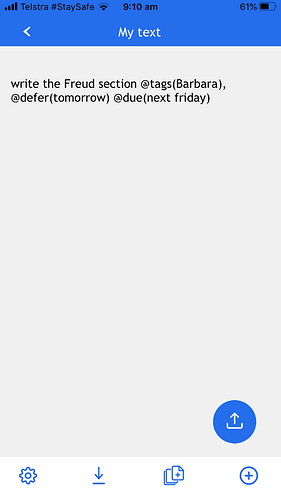 And into Omnifocus it goes!

still a bit clunky, but by far the biggest issue is the clean-up of the text - too many blank spaces and line-breaks. I wonder if that could be automated.

The same works for Roam input, but the extra spaces make clean up even harder - I think I’ll stick to # instead of double-brackets…

Edit: this has kinda moved into #ios

Strange, I just wrote to RocketBook asking about the possibility of enabling integrations or exports to other task management apps, an whilst he did say that they don’t currently plan on doing it - he did point me to https://rocketbook.featureupvote.com/ which has some very similar suggestions and proposals. Maybe have a look and upvote the ones which most scratch your itch.

But your work around looks interesting and has given me another app to look at Pen-to-Print!