As I referenced in another thread earlier today, It’s that time of year when Summerfest is on and people can take advantage of some great discounts (25-30% off). For those who haven’t heard of it, every year a bunch of “artisanal software developers” club together to offer deals on their software and content.

There are some very recognisable names and some that are maybe less so. I think of this year’s offerings I own apps and content from around five of the suppliers, many of them relate to automation, and without exception, I’ve found them all to be great, and many of them I purchased at full price.

Given that the legendary Take Control books is one of the groups taking part and that one of the Automators podcast hosts is a Take Control author for the frequently discussed automation-based app of Shortcuts, I figure it must be a kind of public service announcement to point out that now might be a very good time for those who haven’t picked up a copy of Take Control of Shortcuts book to do so as Take Control books have 30% off with the coupon code SUMMERFEST2020.

Rumour has it that there might just be an update to the book to come off the back of the new Shortcuts updates being covered right now at WWDC.

I personally have bought quite a few of the Take Control books over the years and I know that they do offer free and heavily discounted book updates depending upon the extent of the updates, so the chances are even if there is a paid for update on the horizon, buying now at 30% off could get you a great deal even accounting for that. 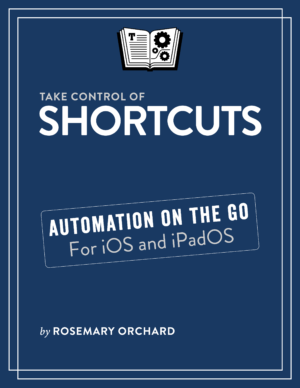