Hello,
I’m confused about this. When an app that you use says that it added Siri Shortcuts how do you get it? For example I use weekcal they just updated there app to include Siri short cuts. How do I access this? Thanks

That means they’ve just added the availability to access the app and some of the functions through Siri Shortcuts and voice triggers.

Open your Shortcuts app, create a new Shortcut and locate your app and see what you can do! Let us know if you run into any issues!

Just because something is available in Siri Shortcuts does not, as I understand it, mean it is necessarily available in the shortcuts app. They are closely related things, but they are NOT the same.

I’ve found that if I use the Siri Shortcuts then they will appear as options in the Shortcuts app. I’ve not had any I couldn’t cajole into there, though I wish that process was unnecessary.

Have you any examples of Siri Shortcuts that you can’t get to be available in the Shortcuts app?

oh no, you can run a Siri shortcut in the shortcuts app.But there are Siri Shortcuts that you can’t replicate in the app.

For example, There I have several Siri Shortcuts that user Find my Friend. But I can’t make a shortcut that uses find my friend unless it is one of this specific ones that Siri Shortcuts is exposing. So, while I can say “Find

” (which is my 'nickname field for my wife), I can’t create a new shortcut that finds my friend Scott.

Have you tried finding Scott several times? It shod generate it as a recommendation like it did for your wife; and then you should be able to use it in the Shortcuts app.

Siri isn’t sophisticated enough to include your wife but exclude your friend. It just bases it on an algorithm that tries to align to your observed needs. Find your friend more and it should start to be offered.

I added some Podcast app commands from Suggestions but they haven’t appeared in my Shortcuts app.

Can you screenshot those examples in the Siri Shortcuts list and the list of Podcasts Shortcuts in the Shortcuts app?

I personally use Overcast for my podcasts, but I’ve been trying to reproduce the disjoint for Podcasts and haven’t been able to so far. I’m thinking I’m not being specific enough 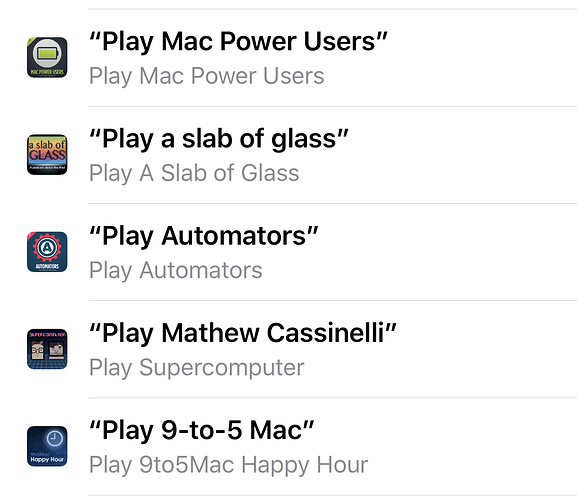 I created these from playing the podcasts and then going into the Siri-generated Shortcuts in Settings to create the Shortcut.

They have not appeared on the Shortcuts list that I can activate on the app.

I set up the Automators shortcut the same as yours to just try it out, but for me, it did appear in the Shortcuts app listing

I’ll have a think and see if I can think of a reason it wouldn’t show for you.

Sure, that works. But imagine if messages worked like that, instead of letting you pick the contact you were sending a message to?

It’s just an extra friction that some things are not exposed in SHortcuts until Siri notices them.

Just to be clear, I am not justifying why things are designed the way they are. I am only trying to help identify any patterns in things that should work by design in a particular way and potentially are not.

Using specific examples are the way developers resolve issues. Issues which are that something kind of does something, sometimes, for someone can be very real but very frustrating to try and resolve.

Patterns can provide firm or even specific reproducible examples, which can then be analysed and corrective action taken to address them.