Show results only give me a text alert

Show result doesn’t give me any feedback from Siri. I only get a text alert/ message from the generated input as output.

I am located in germany and my settings are iOS 12 on an iPad Air2.
What am I doing wrong? Or is there a restriction to some hardware? Or maybe some functions not available yet in every country?

Anyone who have an idea / suggestion to solve this issue?

Just for clarity, Siri only responds on show result if you initiated the shortcut via Siri. If you initiate in the app or widget, you get a pop-up.

Localisation May play a role in this, too. Try setting Siri to an English voice and see what happens, maybe?

2/ 3/ 5. = possible to ask Siri about actual time and set an alarm for e.g. with feedback from Siri about time or that the alarm is set.

By the way is there an official apple community gallery planned for sharing workflows from users (shortcuts) inside the app with information about author etc. like it had been long time ago in workflow… ( I think it had been removed there too some time ago… (for what reason?) ?

And thank you very much for the quick reply.

Just for clarity, Siri only responds on show result if you initiated the shortcut via Siri. If you initiate in the app or widget, you get a pop-up.

Thank you very much.

You also need to ensure that Siri is set to respond verbally always and not just in hands free mode: Settings -> Siri & Search -> Voice Feedback -> Always On 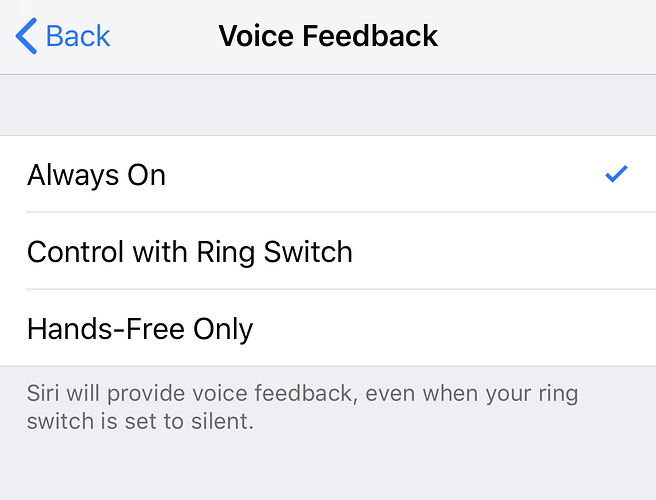