I’ve been having issues with a number of Shortcuts since upgrading to iOS 13.2, which I’ve tracked down to a couple of actions that don’t seem to be working correctly.

I was wondering if others were having similar issues ?

Also are people seeing problems with other actions that have been introduced in 13.2 ?

I assume you did report this at Apple, and also are you running a Dev beta of just release version?

I’m seeing these issues with the public release of 13.2 Shortcuts, no betas involved (with the number of issues there have been with 13, just upgrading to the latest public release is quite enough “thrill seeking” for me at the moment

Not reported to Apple as yet as was trying to get a feel as to whether these were widespread problems or something just affecting me. I suspect it’s the former as I’ve now reproduced consistently on a couple of 13.2 devices and also validated that it doesn’t happen on my wife’s iPad which is running 13.1.3 (she takes a more conservative/sensible, depending on your perspective, approach to upgrading).

As an aside does anyone know what is the most effective route for reporting Shortcuts issues outside of a beta cycle ?

I’m having a different Shortcuts problem where I can’t run any shortcuts from the share sheet on my iPad.

You may well have seen it already, but there’s a Reddit thread on what looks like the same issue.

Thanks. Yes, I’ve only people with the problem, but no solutions. It must be a bug that requires an update. Annoying.

I just updated to 13.2.2 and that looks like it fixed my problem. It might fix yours as well.

Good to hear that 13.2.2 fixed the problem you were having.

Unfortunately it doesn’t seem to have the resolved the issues that I observed.

Some partial good news on this topic.

The issue with the Make PDF action now seems to be resolved in iOS 13.2.3.

The Mask Image action with a rounded rectangle is still broken (at least for me).

Roger, you say the MAKE PDF feature now creates PDFs that aren’t blank? Did you do anything specific to get it to work? I’m on 13.2.3 and its not working for me. I initially thought I wasn’t using the function/feature in SHORTCUTS correctly, but I do not think thats it. And my comments are similar to your experience above. I’ve spent well over an hour trying to figure out why I can’t get it to work.

Appreciate your keeping the group up to date. Your comments were helpful to my sanity!

I went back and double checked this based on your reply and found it wasn’t working for me either, which had me questioning my own sanity as I was certain it had been after the 13.2.3 upgrade !

So it seems that it’s only working intermittently at best.

It also has me wondering whether it was just the act of installing the 13.2.3 upgrade that got it working for me previously rather than anything in the update itself.

I’ve seen from a Reddit thread that there is a fuller fix coming in 13.3, but I’m not on the beta to be able to confirm this.

Fingers crossed this is the case as it’s a fairly important action not to be working reliably. 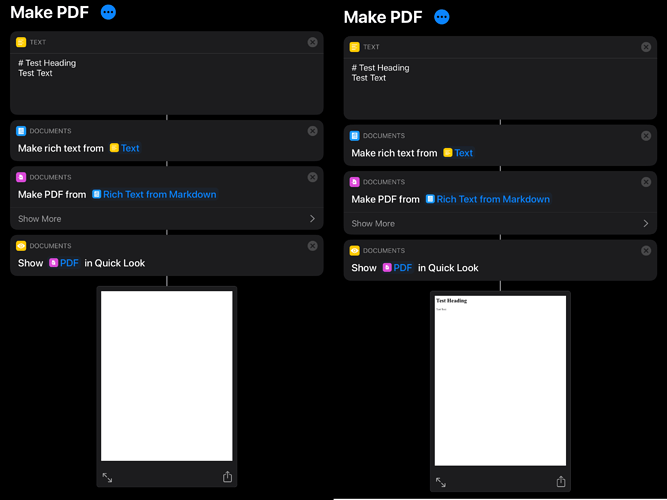 Roger, thanks for the speedy reply. I appreciate your taking time out from your day to provide feedback. It was frustrating changing a shortcut multiple times in order to see if that was the problem. Glad to know I’m not loosing it. I’ll anxiously await 13.3 (as if I have some other choice). Have a fantastic week my friend!

I’ve been having issues with a number of Shortcuts since upgrading to iOS 13.2, which I’ve tracked down to a couple of actions that don’t seem to be working correctly.

Just to note that both these issues now appear to be fixed in iOS 13.3