I’m sure I’m overlooking the obvious. Any tips on resolution?

Can you share what you have at this point? It might help for suggestions of things to test.

No matter the next actions, I receive the error… 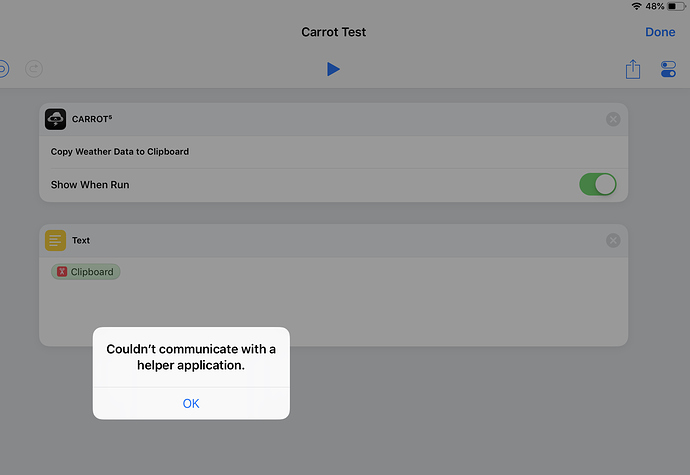 Edit: and… I receive the same error on iPad and iPhone

If the former, all I can suggest is you maybe try removing and reinstalling the Carrot app.

After that, it would be reporting it to the developer, who presumably could then determine if it is an issue in Carrot or Shortcuts and take action accordingly.

Fails on first action and only action.

As suggested, I deleted Carrot and re-installed. Same behavior. I’ll reach out the Dev.

Thanks for offering your opinion and ideas. — jay

The issue is that you need current weather information in Carrot to copy to clipboard.

By executing the current weather shortcut action, you have directed Carrot what you want to copy to clipboard. There a number of other commands including sunrise and sunset that can be added to Shortcuts via the settings in Carrot and thus be added to the clipboard with the Copy To Clipboard shortcut. 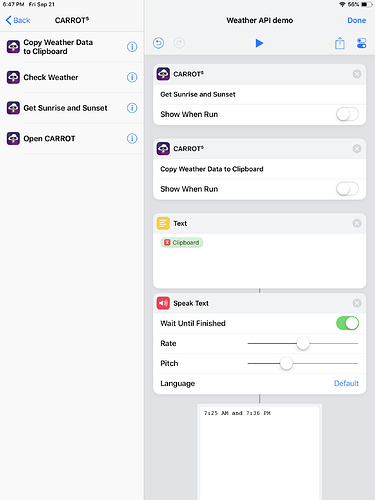 Well, of course! That makes perfect sense. Thanks for clarifying.

I would argue the clipboard action could be better described to indicate that behavior.

I agree with you. I think there is a general documentation / discoverability issue with “donated” Siri Shortcuts partially because of the donation process and partially because the workaround of use the clipboard as a global variable is just that a workaround and thus is not well supported. 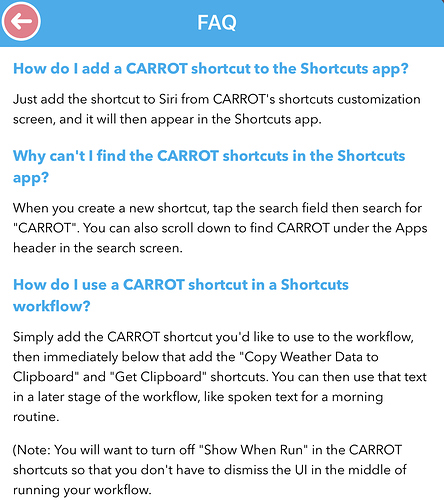 That is not a great spot for that documentation but since Apple didn’t provide a place for the dev to put it in the Shortcuts app, I not sure if there was a good place for it.