I recently got an iPad Pro. Of course I fired up Shortcuts, and watched happily as all the ones I had created on my iPhone showed up on my iPad.

However, when I run any of them, they’re broken. If I open them up and look at the actions all or nearly all the parameters are missing. For example, here’s a pretty simple one I built: 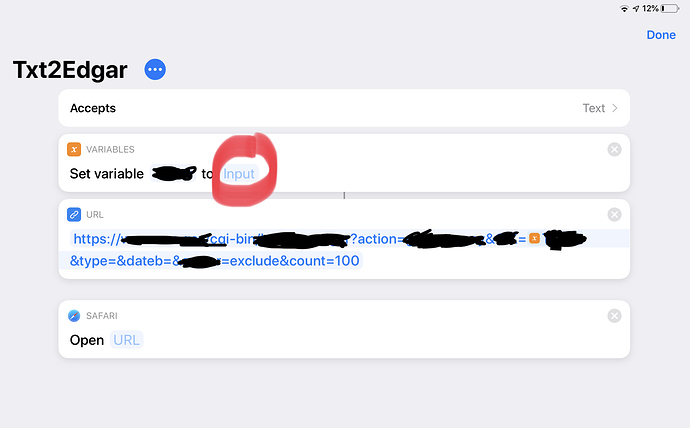 The red-circled parameter is absolutely set (to shortcut input) on my phone.

EDIT: And I just noticed the URL parameter in the final step isn’t populated either, even though it is (with the URL in the prior step) on my phone…

I have allowed untrusted shortcuts. I have deleted Shortcuts from my iPad and reinstalled it, several times, both with and without first turning off the Shortcuts switch in iCloud settings.

kinda extreme but it could work

I’ve had this happen to me twice: both with major OS updates (13 final release and 14 beta). A random but large selection of my shortcuts have all the parameters removed. The only option is to rebuild it by hand. I still back up my shortcuts as files frequently as some level of safety against this — even though it’s impossible to import from file, in a pinch I can open up the shortcut xml as a reference when painstakingly putting everything back together.

even though it’s impossible to import from file

Take a look at the restore one option on BART. I use this to restore Shortcuts from my archive files.

Thanks everyone, was afraid of this.

Looking at the image you’ve posted there is a problem with the variable is nothing is set.

Looking at the image you’ve posted there is a problem with the variable is nothing is set.

The described problem is though that it is apparently set to Shortcut Input on one device, but it is being interpreted or shown differently on another device.

The red-circled parameter is absolutely set (to shortcut input) on my phone.