Has anyone tried the new app “Shortcut Remote”?

‎If you've already purchased the iOS app, the Mac companion app is free to download. The iOS app and Mac app are bundled together as one price. With Shortcuts Remote you can connect remote-controlling your Mac with Siri. For example, tell Siri on...

I have bought it and installed on iOS and on macOS.
On the mac it has been given Accessibility permissions in Security, but I can not get it to do anything when I trigger a shortcut from iOS.
I am on Catalina and iOS 14.3.

I note it has Shortcuts support. That’s enough to have me play with it.

Thanks for bringing it to our attention.

But did you get it to trigger something on your mac. I think the problem is my setup on the mac.
It does not seem to have the iOS device and macOS linked correctly.

… On Big Sur when I grant it Accessibility permission the splash screen goes away. It doesn’t say anything nice like “Thank you” or, more relevantly “Vielen dank”.

However, if I tap on “Speak text” in the iOS app it does speak a message on my Mac.

Somehow it knows which Mac. Yes, both are on my Apple ID but I haven’t paired them in any way.

EDIT: I should add I had to manually add the app to the list in Accessibility - with the plus sign and Cmd-A to get to the Applications folder - as it didn’t show up in the list. (I’ve had this before with some other apps but never thought to manually add them.) So if the developer is listening, the onboarding experience needs work.

I have added it. 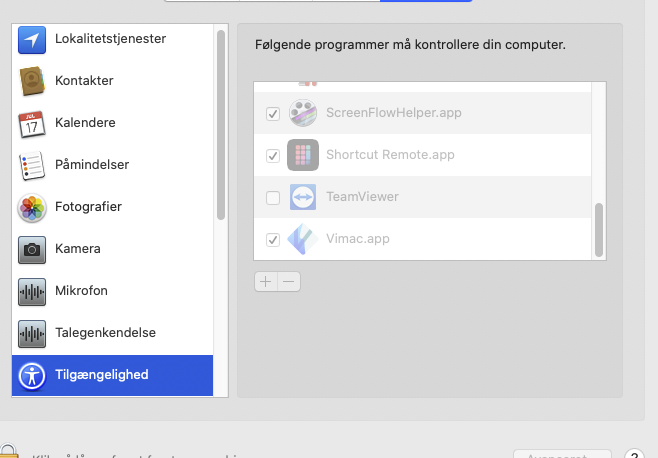 But still nothing happens.

Maybe it is because more than one mac is attached to my account.
But they are not my primary machine. So I will try to remove them.

It did not help to remove the other macs from my iCloud account.

The app needs to have the ability to tell which mac should receive the automation input.

And I answered to quick. After restarting the mac 2 times it now works.

But it would still be nice to could choose the mac to target. Because some users have more than one mac.

I have several Macs on my account. I have no idea how it got the right one. Possibly it polled all the active ones and found one with the server-side software active.

I left a review - waiting for Apple’s reviewers, I think - pointing out the issues.

Now to try the function - some time over the holiday.

Don’t forget you can just use “Run Script Over SSH” to do a lot of remote control of your Mac from Shortcuts. I suspect the idea of the app is to make it easier, but if you like automation, scripting should be something you look at if you don’t use any already.

Would I not need to open ports in my firewall to access my mac over SSH?
And if I have the mac at another location this would not work or am I missing something?

What seems good about Shortcut Remote is that it uses iCloud to handle the communication.

Have you tried to run an AppleScript with Shortcut Remote?

I am trying to make it run a Keyboard Maestro macro on my mac. And it seems to have recieved the command, but the macro does not run.
It runs if I run the AppleScript locally.

Would I not need to open ports in my firewall to access my mac over SSH?
And if I have the mac at another location this would not work or am I missing something?

If you are on your internal network then no, you should not need to open any ports on your NAT firewall. SSH should be available from your Mac by default.

If you are on an external network then yes, you would need to open up a port in your firewall to your Internet connection or connect to your local network via a VPN. Note you don’t have to open port 22 specifically. It is usually pretty straightforward to set-up a port mapping with your router’s firewall to link a different port number to your Mac.

I would also recommend using key-based credentials to secure your connection rather than relying on username and password. The post below may be helpful for anyone wishing to do that.

Setting up SSH for Shortcuts

A few months back I posted some instructions on the Automators podcast forums that I thought it would be worth re-posting here as it seems there are quite a few people out there who would like to utilise Shortcuts to control their computers from the...

What seems good about Shortcut Remote is that it uses iCloud to handle the communication.

I can’t say for sure that it does not, but that also isn’t quite what the site says; it may just be a poor choice of words. Data synchronisation after all is not really the same thing as communication.

And the best thing: Shortcut Remote control even works from remote: All data is securely synced via iCloud. So you can even take a screenshot on your Mac while at the gym.

But, I suspect that the communication is happening via iCloud and based on the use of the word “sync” rather than “communication”, what it might well be doing is reading and writing instructions via iCloud (with a file or more likely a CloudKit sync of app data) to trigger actions and receive feedback. This would not require any ports to be opened externally, and would be encapsulating the same principle as the old Dropbox & Hazel remote execution technique to monitor for a file-triggered activation and send back a response.

Overall, as I noted I think it probably is an easier approach using this app, but as a counter-point to the the reliance on iCloud rather than ports, I would suggest that this ease of set-up then results in a less powerful solution as the SSH approach as then you can run from other apps on i*OS that support SSH, from other appropriately authorised devices, such as i*OS devices with a different iCloud account (e.g. a family member), from other Macs, and in fact from other computers and devices not on Apple’s platforms.

Certainly the Shortcut Remote App seems a good option for many people who would never have need of any of the broader options the SSH approach would provide. But for anyone into automating their Mac, I’d definitely suggest exploring the use of SSH for their own automations.

I am trying to make it run a Keyboard Maestro macro on my mac. And it seems to have recieved the command, but the macro does not run.
It runs if I run the AppleScript locally.

Very much a guess on this one, but if the Remote Shortcut app is running the AppleScript in its own session, then maybe it is missing the authorisation to control Keyboard Maestro?

AppleScript on macOS is a useful tool for pro users and administrators alike. Even though it probably is not (and shouldn’t be) the first tool of choice for many tasks, there are some tasks that Ap…

I tried resetting the AppleScript permissions but Shortcut Remote did not prompt for an approval. I will look at the Keyboard Maestro engine log.