First shout out to Simon for the great app! I like the posts from kopischke and slyumer for different examples of scriptables they have posted (really liked the exports function example)

I’ll bore you after I give this example of what I’m talking about with Sound inside of WebView. If you have the scriptable setup with a Siri shortcut, you can say the command and see a table/webpage/etc on the Siri screen if you have added a webview.
(Example) 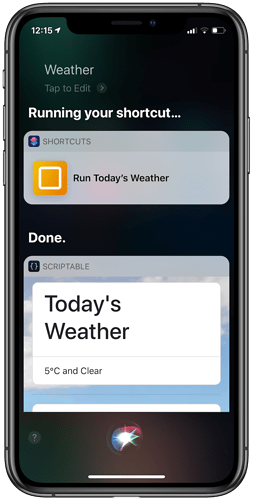 Inside the webview you can run javascript/html/etc but whatever is typically limited to working inside of Safari IOS with is riddled with restrictions. A while ago I ran into some of these restrictions for playing sound automatically for some web VR stuff I was working on, I workaround for it. I tried this same work around for the webview and it worked!

So I recorded me saying “Hey Siri” to see if I could trigger it on the phone, and I worked! I’m uncertain if this will work for other people’s phones because it’s my voice but if you do hear sound then you can try your recording your own voice.

Warning in advanced I have placed this example mp3 on a free cloud service, so if it starts getting hammered by usage I’m going to remove it.

I have other ideas and scripts but will have to get back to that later. I’m sad I missed the last beta testing Simon had, I was a day late lol.

Cool. Thanks for sharing

Did it work for you? at least hearing the sound? or was it able to trigger Siri as well?

Hey Simon is there any way this could be added for future versions of Scriptable? addText(title: string, subtitle: string, fontsize: number): UITableCell. I’m trying to recreate the weather app using different API endpoints 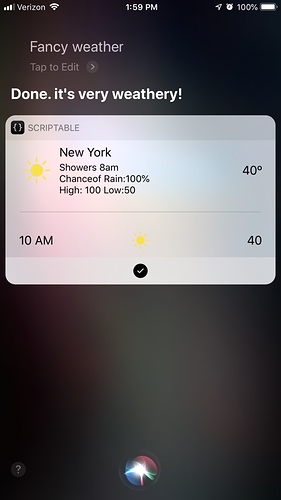 I don’t think anyone will care but I have an example of some stuff I was able to do with Scriptable 1.3 that is going to be nice an reusable later. I formatted this in a way that hopefully it’s re-usable for other people

I wanted to make a module function for IFTTT because I wanted to make it easier for me to make calls and import the function calls
First I created a folder in scriptables called /lib and placed the IFTTT function I made there.

Do you really need this? no, not really but I use IFTTT a lot, so this shortens my time to code the same thing over and over again. I’m planning on making other API function module files that might help others quickly use it without worrying about getting it to function.

Here is my scriptable file that calls the LIB file

You don’t have to use Siri only with this I just wanted to use it this way in this example to cover my common function calls I do to Siri.

Step 1. click on properties for the Call IFTTT shortcut 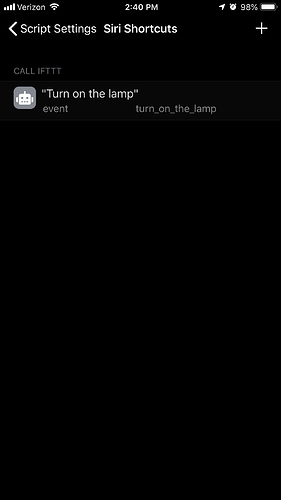 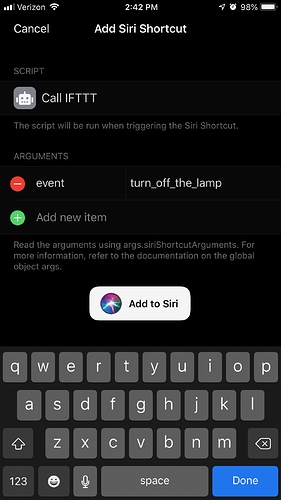 Step 3. Click Add to Siri and remember what you want the Siri Shortcut to be called (hit record) 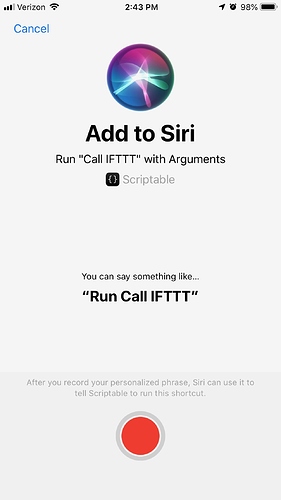 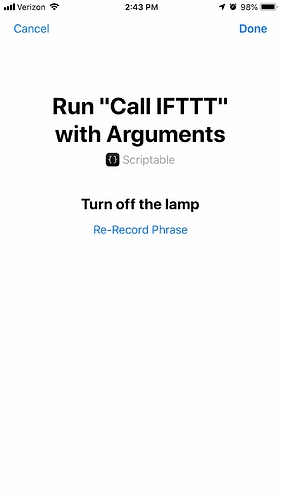 Step 5. Rinse and repeat for every IFTTT event you need. You can reuse this for all the IFTTT webhooks events you need 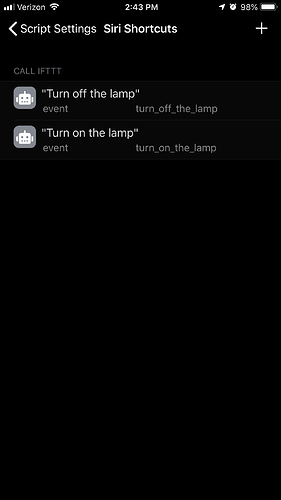 I think @simonbs did an amazing job with Version 1.3, I’m going to be looking into the keychain soon. It would be cool if I could have Siri speak without waiting for the whole script to finish running but I’ll find another way around that and have an API receive the call on a server and delay the IFTTT call without holding up the script.

This is very cool! Thank you for sharing!