Send SMS when entering a Location?

I suspect that this ‘can’t be done natively on iOS yet’ as I haven’t found a solution on the Web or in the forums. I’m hoping I have missed something obvious…

I need to have the text message sent directly from my iPhone as the receiving entity (an entrance gate) uses a combination of callerID and passcode to validate any SMS requests. It will open if I call it from my phone or if I send it a suitably encoded message.

Idea is that as I drive into the location, the phone will sense me entering the location and will send the SMS so the gate (which is very slow to open) will be open when I get to it.

Afaik, Apple does not allow text messages to be sent without user interaction. Compose, yes - but not the actual send action.

How about a verbal trigger of a shortcut instead?

Hmmm, thinking about this some more. I wonder if there’s a web service that would do this, might be a way to get around the core problem?

Have you tried setting the “Show when run” option off on the “Send Message” action? If not, I’d maybe give it a try

Also maybe check out this Cult of Mac post?

Thanks all for your swift replies.

At the moment I can use voice to open the gate “Hey Siri, call the gate” (the gate recognises the caller ID) so a voice activated shortcut provides no real advantage.

There may be a route via IFTTT. I’ll have to explore more.

Have you tried using a 3rd party SMS service? I use Nexmo REST API , it allows me to to set sender ID. Maybe it will work with your gate?

Anyway, afaik and as others mentioned before me, probably not possible sending directly from phone on iOS.

I know iOS doesn’t allow sending messages without the user somehow giving permission to send, but what about a location that triggers Siri to prompt for approval to send? For example, you arrive at destination X which triggers Siri to ask you if you want to send the pre programmed message.

Location awareness is built into many apps, including the reminders app. But, it always requires a trigger by the user to action. You might get a notification, but you would still have to tap on the notification to run any actionable component it might have.

Technically you could build a constantly running Shortcuts shortcut that would poll the location and run another shortcut at the appropriate geographic zone once reached. But this would tie up the app and hammer your battery life.

Apple has a security standpoint currently of always getting confirmation before triggering an automation like the one being discussed here. Because the OP is driving, that’s why I suggested the verbal Siri trigger approach above.

Android can do this sort of stuff with the right apps, as it has a much lower security bar, and a much higher scope for doing whatever you like with it. It’s just a different philosophy is all, but if the need was high enough, which I doubt it would be here, then the OP could switch platforms or purchase an additional phone just for this purpose.

… but at that point I’d also be exploring the options around the gate itself in terms of lock, triggers and motor.

@adamtow made the shortcut GeoCuts which triggers shortcuts based on a location. I don’t know how it works and I’ve never used it, but you can find it here: https://tow.com/shortcuts/

Together with the option Show when run being off, you should be able to accomplish your goal.

The only downside is that you need to manually run GeoCuts first before arriving at the desired location, as I’ve understood it.

The only downside is that you need to manually run GeoCuts first before arriving at the desired location, as I’ve understood it.

It isn’t the only downside. As I noted in my previous post, that sort of solution will also fully occupy the Shortcuts app for the whole time it is running, and will increase the device’s battery drain rate.

They wouldn’t necessarily be an issue in a car. The device could be plugged in and if you don’t want to use Shortcuts for anything else during the journey, then they are mitigated.

Having used Android for several years (before iOS and alongside) I’m perhaps overly, or maybe rightly(?), wary and cautious when it comes to any “background process” that isn’t really running as a background process.

Well, it’s the only non-Jailbreak solution at the moment that runs automatically and in the background. Does it use up extra battery? Sure, esp. when you are checking your location frequently.

While everyone is asking for it, we don’t even know if Apple will allow shortcuts to run automatically. Until then, my position is people should be at least experimenting with the solutions/workarounds that exist today like GeoCuts and Cronios. That way — if and when Apple releases a feature update allowing for auto-running of Shortcuts based on time/location/etc. — you’ll be in a better position from a knowledge and experience standpoint for writing these kinds of background aware shortcuts.

I would accomplish this using Launch Center Pro and a Shortcut.

I’m using Launch Center Pro to prompt me for all sorts of shortcuts like Toggl and opening one of two garage doors, etc. Works great!

I use IFTTT for a touch-free solution with the “You exit an area” trigger and the “Send me an SMS” action. When I leave work it automatically sends a text to my wife.

Disclaimer from IFTTT’s page: “This service has a cap of 100 SMS messages per month for users in the US and Canada and 10 per month for those outside of North America.”

Wouldn’t the issue here be in setting up the receiving number on the gate? It would get a PIN, when you register the number, but how would you find the PIN from a security gate trigger? 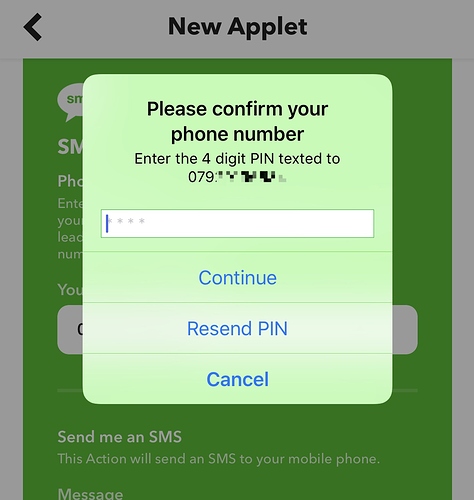 Another, much more minor, point would be that you can only register one number. All good, unless you are already making use of the SMS feature; which I think many people do in the same way you have