I have a brilliant idea which I was testing a few minutes ago as I’ve been working on some automation on Scriptable and I’ve started to develop a prototype for Scriptable HTML Framework which can boost some WebView development, but what I’ve found out that there’s an issue with the number of files required to make it run properly. Because every JS file which is included in the Scriptable folder is also shown inside of App it could make a list of scripts much bigger. Could be there some possibility to develop a variable in Scriptable JS that will show/hide script in App, but will work with the import module or maybe create folder scripts that will have its scope of import module.

I’m not an iOS developer and don’t know what could be cost and how much it will take to develop that kinda feature, but it might be a great idea for the future.

Try moving the script file to be imported into a sub-folder within the Scriptable folder (in Files), and including the folder in the import path. 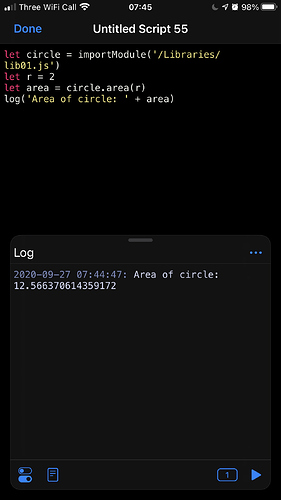 Files in sub-folder are not listed in the app.

Thanks a lot, sylumer that might be really helpful. I’ll probably make a better prototype with Typescript to allow include Angular/Plain HTML + JS. It could open a lot of possibilities to create PWA Apps to build locally with automation.

Thanks to @sylumer. I’ve improved some of the code for HTML Wrapper is not that big but it’s the only a prototype of what I want to do.
Example: To Do List with Bootstrap 4 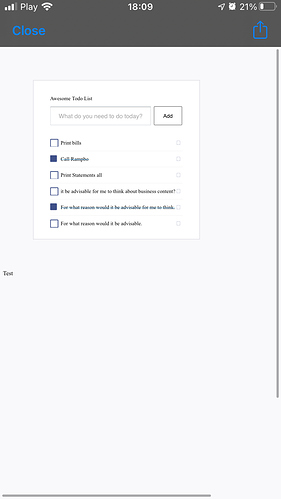 Scriptable750×1334 128 KB
Everything is split from HTML, CSS to Included Javascript.