Script to show upcoming U2 concerts

I would like to have a script that shows upcoming U2 concerts from https://www.u2.com/tour

Since I’m not familiar with scraping websites (parsing elements) this might be a (nice) challenge. The examples that @simonbs posted here will definitely help though!

Unfortunately I won’t have time until this weekend to experiment. If anyone is up to this I would be happy to learn from her/him!

Bonus: Showing a flag of the country instead of the two letter abbreviation

I happened to spot this the other day and bookmark it:

Let’s turn an ISO country code into a Unicode emoji, shall we?

Ever since the first introduction of emojis in Unicode 6.0 the number of available pictograms keeps exploding. One particularly nice…

If they use ISO countries it should work to convert the codes to flags!

If I get that working I might be interested in showing the upcoming games of my favourite soccer team (date, day, competition, home team, away team - adding club logos)

Too many ideas, not enough time…

I am not believing this! Just today I was “wishing” that I could automate my data collection from various sites and then post it into my community forum. Doing it by hand is VERY time consuming. Y’all have REALLY gotten me to thinking hard on this now! THANKS for the motivation!

In general I think it’s preferable to use an API rather than scraping, if possible. Maybe this?

I jus took a look at U2s website. Turns out they have all their concerts embedded as JSON so it was super simple to get an array of all the concerts. This should get you started.

Yes, I think using an API is better then scraping. However, I (also) prefer to get data from the “true” source.

So I’m really happy with what @simonbs posted and will experiment with that this weekend.

Sorry for the dumb question, how did you find out that the website used JSON to store the information, I am learning JS and I think it’s important, at least to me, to understand that, thanks

What I do is I open up Chrome or Firefox and the network tab in the developer tools, and then load the page. In the network section you will see everything that gets loaded - CSS files, JavaScript files, PHP, JSON - anything called as part of building the web page. This would allow you to see if a JSON is loaded directly (that might not work with all pages, for example in many of my web apps you would call a PHP file which gives you a JSON output, so just searching for .json might not always work

I am using Safari, I only got CSS, GIF, JPG, JS, PNG and WOFF, there was one that took the longest to load and the type is Document, could that be the JSON document? Thanks

Sometimes I do as Rosemary suggested other times I use Charles Proxy, either on macOS or iOS. In this case I used Charles for iOS.

I’m a long time user of Charles on macOS and while it’s only four months since the iOS version was released, it has already become one of my favorite iOS apps. 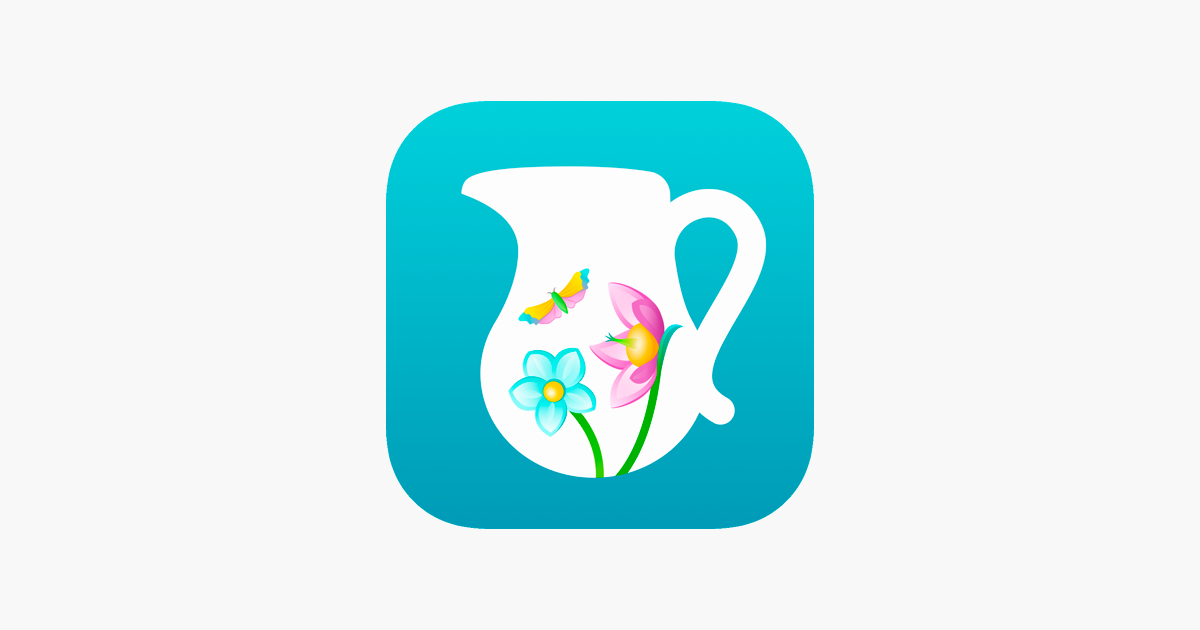 ‎Charles Proxy for iOS lets you capture and inspect network requests and responses on your iOS device. You can view metadata, headers and bodies in the app, so you can finally debug your app’s networking issues without a computer. Charles Proxy for... 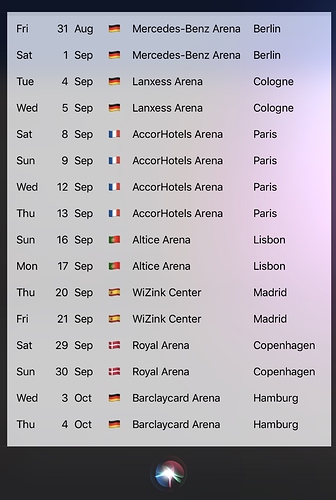 @simonbs: I noticed something weird I think. When invoking this Siri shortcut in portrait mode (on an iPad) I get the full list from the source URL, but when invoking it in landscape mode the list ends premature (at the second concert in Amsterdam). Is this a bug in iOS 12 or in Scriptable?

Awesome! I’m glad to see that you got it working.

The shortened list is actually working as intended. What you are experiencing is a limitation in iOS. The UI presented in a Siri Shirtcut can not exceed a maximum height. That height may vary between portrait and landscape.

Oh. If I start the shortcut in portrait mode and then switch to landscape mode I still have the full list. That’s good enough as a workaround, but I guess I’m just lucky then that this leg of the tour fits in (at least) one orientation…

If I get that working I might be interested in showing the upcoming games of my favourite soccer team (date, day, competition, home team, away team - adding club logos)

Got that working as well! Won’t share it though as it is based on the home page of my favourite team and unfortunately there’s sometimes violence between “supporters” (hooligans) of different teams, so I’d rather not share my preference online…

Bit of a bummer: the logos and the league don’t fit (in separate columns) when invoked from Siri, so while I had those working as well I ended with just day, date, time, home team, and away team. Well learned something new, and the schedule was immediately useful

My favourite band’s site doesn’t have a JSON file (check them out, they’re great!) so I had to work directly on the HTML. Here’s a screenshot and the code I wrote based on what @rob shared here, so thank you for the guidance! Also, thank you @simonbs for creating such a cool app! I’m looking forward to playing around with it even more. 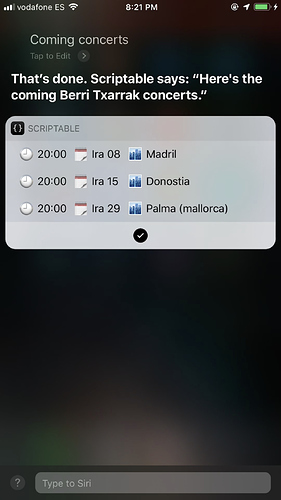 Now that the GM build of iOS 12 is out I also updated my iPhone X (hope I won’t regret that!).

Looks like I need to modify all my scripts. While the output was fine on my iPad Pro I get a lot of ... instead of text on the smaller iPhone screen…

its giving me the error message: “TypeError: html.split is not a function” since "‘html.split’ is undefined?

I think the script was originally created during the beta of Scriptable. During that time, Request.load() was changed to Request.loadString().