Has anyone dabbled with creating macros for use specifically inside of Keyboard Maestro?

For example, there’s no default hotkey for stuff like “Rename Action”, “Disable Action” or “Engroup Actions”.

Is this silly? Am I spoiled from SublimeText packages? 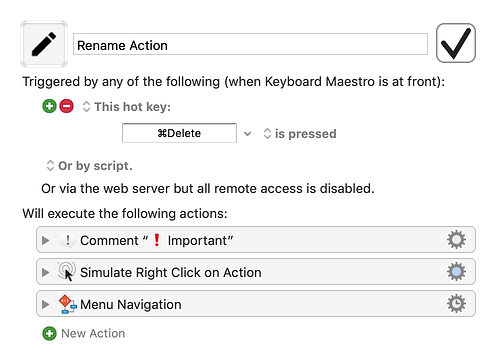 Decided to get meta and create a couple macros for speeding up beeps and boops while composing in Keyboard Maestro. This one is just a keyboard shortcut to rename an Action. Keyboard Maestro 8.2.4 “Rename Action” Macro Rename Action.kmmacros (35 KB)

Haven’t really thought about doing those, but I do like the idea.

Added links to one of 'em. I’ll include some more later on.