I found this today, while trying to get more mileage out of Notes (maybe there’s a better tool).

TLDR: on macOS, make rich text and clipboard actions give me a system file path instead of an actual rich text. (oh, and notes URLs are different on iOS and macOS)

I’m following this tutorial from Tom Twardzik on How to Create Deep Links to Specific Apple Notes on iOS (and yes, I know it says iOS). It appears to work on iOS, but I see some really weird results running the same shortcut on macOS[1].

The shortcut uses the Content Graph to allow us to access the internals of the note data and copy it to the clipboard. From there, we match the note’s direct link URL, plug that into link markdown and convert that to rich text which gets sent to the clipboard. It’s kludgy, but it works.

FIrst I noted that the URL for a note changes between iOS and macOS. The format on iOS is:

The same note in macOS leaves off the mobile at the beginning of the URL (the UUID for the note remains the same, thankfully):

I changed the regex in Tom’s shortcut to accommodate both:

Now that we have the URL, we have to get it into rich text, and here’s where things appear to go sideways on the Mac. Here’s the last part of my shortcut (from iOS) 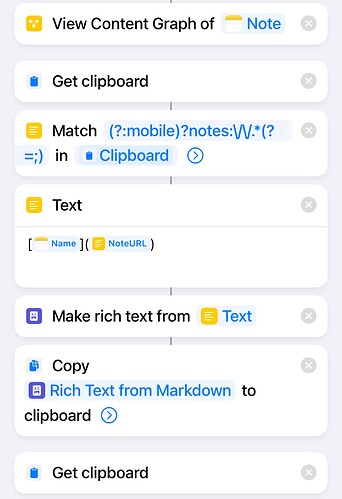 On iOS, I get a rich text link with the correct URL that I can paste into anything. On macOS, the output seems to be a filesystem path to an html file, with the link to the note sort of embedded in that path:

I can go to that folder (/var/folders/t6/svhh2wf55j5799sj9vht_2dc0000gn/T/com.apple.WorkflowKit.BackgroundShortcutRunner), but there’s nothing there.[2] Certainly, it doesn’t paste into notes or any other app as expected.

My best guess is that the HTML file referenced contains the rich text generated from the Make rich text from markdown action, and somehow in macOS I’m getting a reference to the file rather than its contents.

I don’t suppose there’s a fix for this? or a better way to grab that notes:// URL?

[2] I’m an old UNIX/Linux hack, so not afraid of this stuff, but I’m deep in the bowels of special macOS directory structure and I don’t know where to find docs

I will be following this thread closely to see if someone has a solution. My experience says there isn’t one, and the problem is with the Make Rich Text from Markdown action. Even a minimal shortcut like this

fails. Running it and then clicking on the eyeball button in the result box that appears below the second action gives this,

which makes no sense.

If I add a Copy to Clipboard action to the end of this shortcut, I get, as @DonFaulkner does, a path to a file deep in the /var subdirectory. The path isn’t quite right (it’s missing the last subfolder), but there is a file down there with the name

and the HTML contents

This is what I’d expect from a Markdown-to-HTML conversion, but it isn’t rich text on my clipboard.

I will be happy to learn that I’m missing something simple,

Rich Text conversions in Shortcuts have been problematic this past year, and this is just one of several examples of these issues. Sometimes adding the Get Clipboard action at the end coerces things to work (I’ve certainly had more luck with this on i*OS than macOS), sometimes it does not. Some previous issues have been resolved, but some remain.

The first is Markdown -> Rich Text. This is in effect the same demonstration as above that something rather buggy is occurring, and instead of the rich text content, an intermediary HTML file is being picked up. To me that suggests an issue with the underlying conversion engine that Shortcuts uses to switch between object types as viewable in the View Content Graph action.

The second is HTML -> Rich Text. For me, on my Mac (not running any beta OS), this works as expected. I can paste the result into an app supporting rich text and it looks just fine.

Except, we don’t because we’re keeping the conversion flow going within Shortcuts, so we can get away with it, the temporary HTML file remaining available for the subsequent conversion step (the path error seen is becuase the intermediary file is no longer available to the receiving app - as per the details in the original post).

The third option is therefore Markdown -> Rich Text -> HTML -> Rich Text, and for me that yields the desired conversion result.

Give the three tests a try and compare the results. See if you get the same as me and if you can use the workaround until the functionality works as expected. Hopefully, the bug squashing efforts continue within Apple for these outstanding issues, and things will continue to settle down.

Thank you! It would never have occurred to me that a pipeline of conversions that starts with a conversion that does not work could somehow work in the aggregate.

After reading your solution and incorporating it into my test shortcut (which then worked), I noticed that Drafts provides a Markdown to HTML action. So if @DonFaulkner has Drafts installed on his devices, he could do a Markdown→HTML→Rich Text conversion using that action. Like this: 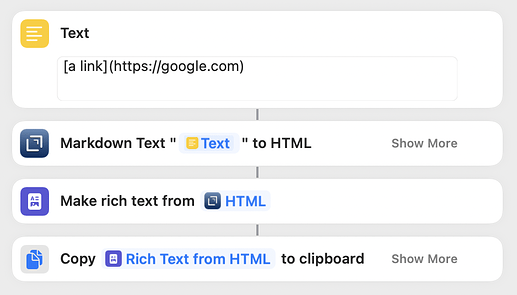 Once we’re going to convert to rich text from HTML, why bother with the Markdown stage at all? Instead of creating a Markdown link from the match, why not create a HTML link instead? It’s just text, too, and nearly as simple to create.

Here’s my version, taking that approach. 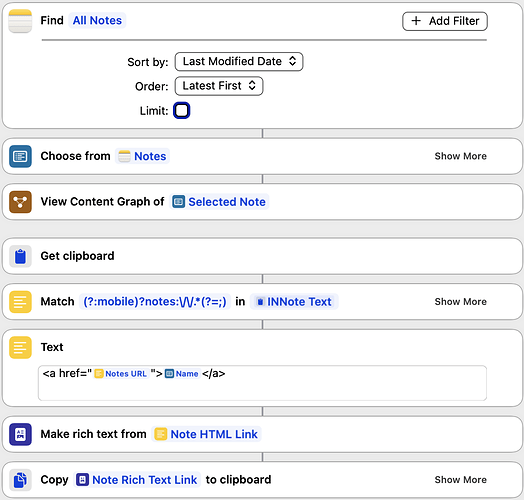 One less step, and doesn’t require a third-party app.

(I also renamed my magic variables, because OCD…)

Thanks for this! I thought I was losing my mind! I was referred here by the good Dr. Drang from the Mac Power Users forum. I’ve had good experience with using Drafts to prep the text for conversion. In my version, I also used another third-party app (Text Case), which has a shortcut action “Replace” to convert wiki-links ([[ and ]]) into bold italics, since I rarely want those in something that’s being exported to RTF, but I do want to be able to see key phrases.