I just set up a Pushcut server on a spare iPhone

I get this screen on the Pushcut server - it is clearly activating but why does it require me to manually save the new Note? 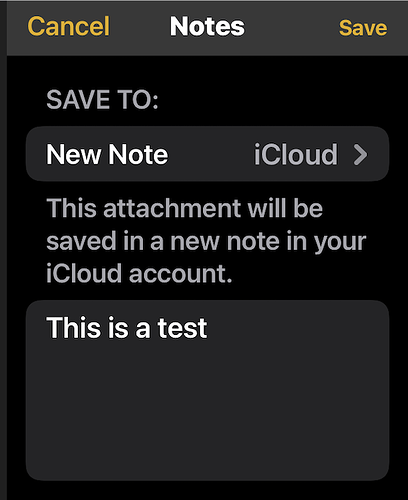 Can you share the details of exactly what you have configured.

I realized that my Shortcut was pausing to await manual input so I edited the Shortcut.

Below is the “Notes Test” shortcut I created in Shortcuts as well as the corresponding Notification I created in the Pushcut server.

I no longer get the Pushcut Server request for manual input. When the notification is activated all appears to work - the Pushcut server acknowledges a request and if I activate the notification by URL I get a Success message. Interestingly however, the Note is not created. Or rather, the Note is created on a delayed basis and only appears in my Notes a few minutes later - and after I have created an additional note manually using the arrow at the bottom right of the Shortcut screen. Yet running the shortcut manually consistently creates a note immediately,

So why would the shortcut create an Apple Note immediately when run manually but not work or work on a delayed basis when executing the shortcut via automation?

I see now that the issue is delay of the iCloud sync.

Is there a way for the Pushkit server to sync Notes immediately or is that not possible because the Pushkit software itself is running full-time in the foreground?

The sync is managed purely by the OS. I don’t know of any automated way to force an update for notes syncing; but maybe someone else does?

The sync is happening in the background, but maybe if you could switch to Notes and then back that would work. I’m just not sure Notes supports anything like x-callback-url that might allow for temporarily foregrounding Notes.

The sync is happening in the background, but maybe if you could switch to Notes and then back that would work.

The question is can this happen automatically without my input.

Yes! You could have Shortcuts “open app” and open Notes, and then use a normal automation to open Shortcuts when Notes opens. I do this for several apps on my server device.

Would it not be Pushcut you would want to open after Notes’ open rather than Shortcuts?

By returning to Shortcuts the Shortcut can end and then returns to Pushcut. It depends on how the app is being opened and whether or not you have other steps left to do. Personally I have all of those apps open Shortcuts after 10 seconds (Eve for logging data about my energy usage, Carrot for making sure I don’t lose my streak), and then the Shortcut action “wait for return” handles the rest.

This does indeed fix it (as below) - many thanks! The “Wait to Return” seemed to freeze pushcut during testing; it works fine as shown below.

Question - is there any way to execute this in the background without the need to acknowledge the Notification? Or is that only possible for a Time or Location based trigger? 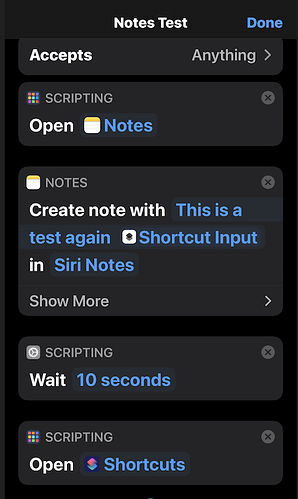