Does everyone have this issue or is it just me? When I drag an action from the right side to the left, the existing actions part to receive an action far from where my finger is. The example below is actually one of the times it’s been actually close. 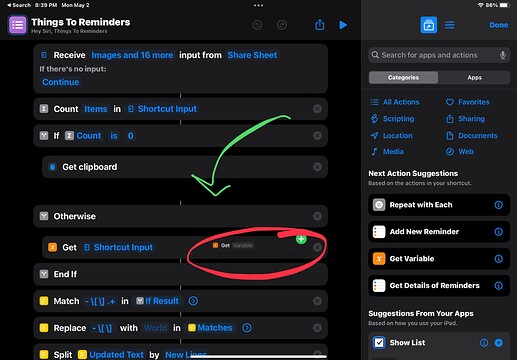 I’ve just accepted the fact that I have to drop the action far from where it actually should go. Sometimes it just refuses to part and I have to grab the action again and it usually works the second time.

I’m on the latest beta, but I’ve had this behavior even without betas. Is this just me? I do have a paper-like matte screen film on my iPad. The film reduces glare but perhaps it’s messing with sensitivity of screen input. The same happens when I use the Apple Pencil.

I’m on the latest beta, but I’ve had this behavior even without betas

Regardless of how many people experience an issue, if you are taking part in a beta, then you should be reporting any issues or unusual behaviours. That is the key point of beta testing after all - for the developers to gather feedback on how the app is working and in particular on any issues that arise, be they common place or edge case.

It sounds like you are talking about the insertion space not being exactly where your finger is. I think everyone experiences that. I always look for where the space is and gesture up or down to move that space.

Thanks. I do send feedbacks (which is why I make the screenshots) but those go into a void.

I’m trying to decide whether I need to do more debugging on my end (eg, peel off that anti-glare film that I like and was so hard to put on bubble-free).

Sounds like everyone gets that so the film stays!