MFC Deck widgetizes your shortcuts in a dynamic control deck, in Siri voice responses, on your Apple Watch, and (coming soon) to iOS 14 Home screen widgets.

I’m happy to announce that the public beta of MFC Deck is now available for testing via TestFlight. The current beta is optimized for iOS 13, since I’m targeting a release prior to general availability of iOS 14. Pricing is yet to be determined. 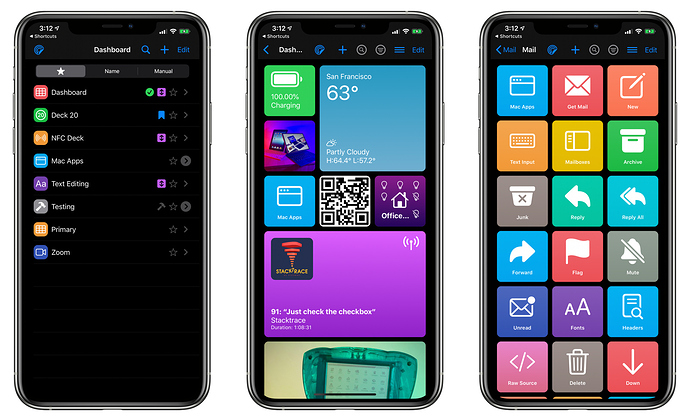 A brief list of features of the app is copied below. For detailed information, I refer you to the MFC Deck documentation:

Here are some screenshots that give a taste of what’s possible with MFC Deck. I’m looking forward to seeing what the community can come up with!

Dashboard: Break free from having all your shortcuts looking the same except for their color and icon. Go from this view in the Shortcuts app to these views in MFC Deck! Create a dashboard of shortcuts that display relevant and up-to-date information throughout the day.

The same MFC Deck card, as presented in-app, in Siri, on Apple Watch, and (soon) in iOS 14 Home screen widgets. 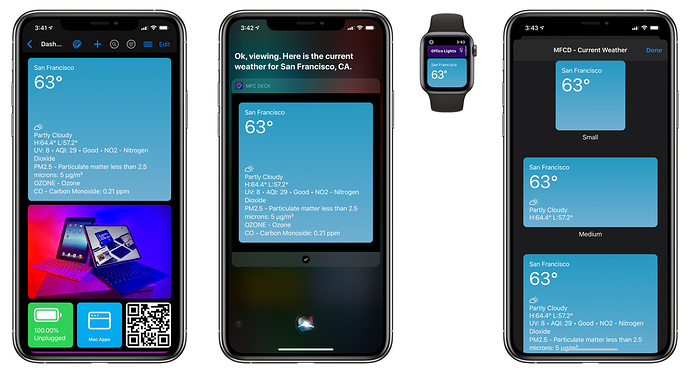 Siri Response Cards: When you’re on the go, configure your shortcuts to present their content right within a Siri voice response — no need to leave your current app!

NFC Decks: MFC Deck makes working with NFC tags easy and fun. Screenshot depicts a text editing deck that operates on the contents of the clipboard. Since running shortcuts via NFC tags can work in the background, all you have to do is tap on the tag and watch the clipboard change without leaving your current application. You can create multiple decks that control the same NFC tag. Switch to a different deck, and the tag does something completely different. 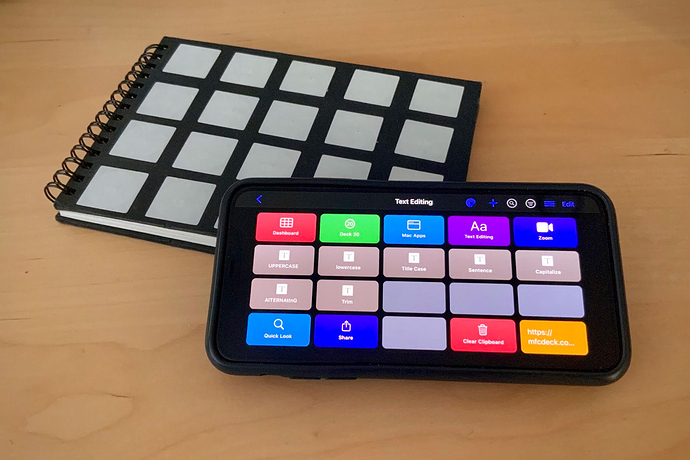 Apple Watch Decks: Your cards are also available for viewing on Apple Watch. Get a look at the state of your cards with just a glance. 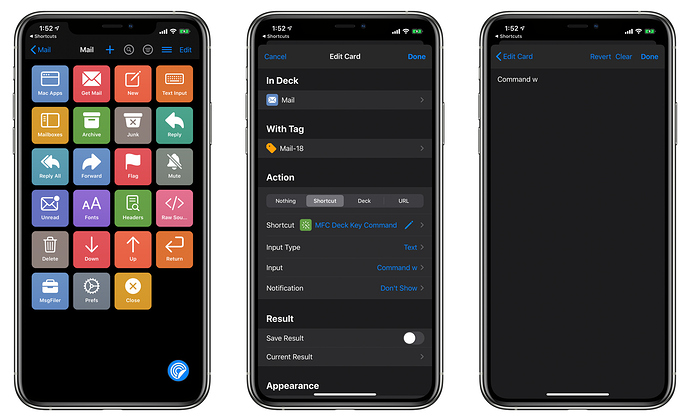 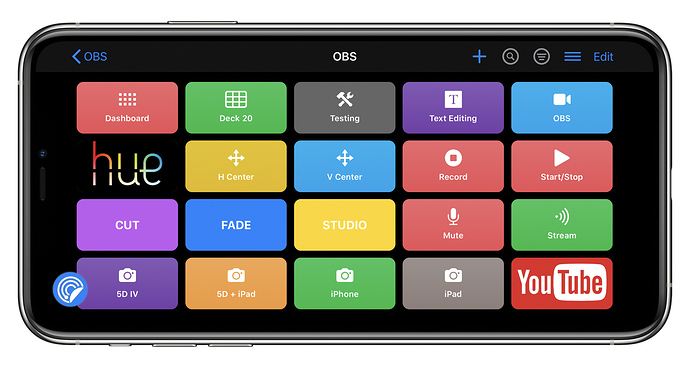 Thanks @adamtow for providing the beta

I’ll enjoy trying it out.

I’m so impressed and excited by this, and also completed daunted by the power and complexity. @adamtow, what’s your preferred venue for feedback/discussion/stupid questions?

@RosemaryOrchard will be creating a dedicated MFC Deck section in the forum. Until then, feel free to ask questions in this thread.

I’ll also be answering questions on Twitter at @mfcdeck and a subreddit https://reddit.com/r/MFCDeck. If you have something you want to send privately, you can use the Feedback link in MFC Deck > Settings.

It’s a complex app for sure, but very, very powerful. Definitely look at the sample shortcuts in the documentation: https://mfcdeck.com/docs/#sample-shortcuts They form a good starting point for learning how this works.

It works best right now on iOS 13. Going to be getting an iOS 14 test device this week and will begin my optimization (have been testing on an iPad mini which seems to be more stable with iPad OS 14 than iOS 14).

Looking forward to your questions!

Any help with that would be appreciated, and then my next question is, how can I make those cards refresh themselves? Or is that going to be an iOS 14 thing?

They normally should refresh. I’m making some changes in the next beta release which should improve things as well. In the meantime, give your device a shake, which forces a refresh of all cards in the deck.

When you run one card, it will only refresh that card when MFC Deck Helper returns to MFC Deck.

If you want to refresh all cards, you can also add a Refresh Cards action to your shortcuts.

Let me know if any of those tips work.

Thanks! After restarting my iPhone they are refreshing as designed. The shake trick is nice, but I wonder if a deck should have a setting to refresh when opened?

Getting everything to sync properly is something I’m still working on improving and getting to be rock solid.

Normally it should detect when you open the app to grab the latest changes. I’m also adding a pull to refresh in the next beta release.

Do you want people who are using iOS 14 Dev betas to test this or not?

It works better on iPad OS 14 Beta but it’s a little buggy on iOS 14 Beta. Give me a few days to get some optimizations in for 14, as I just got a test device. If you have any iOS 13 devices, feel free to load it up on those.

@adamtow I would like to understand better what “refresh” means. I would have thought it would mean to re-run all Shortcuts associated with Shortcut cards, but that doesn’t seem to be the case, at least not always.

Refresh refreshes the display of cards. It does NOT run all the shortcuts in the deck.

If you want to do that, I suggest using the MFC Deck Autocuts shortcut. What this does is given a deck, it runs all actions of cards in the deck. To prevent recursion, don’t place this as a card in the deck that you want to “refresh”. I would bind it to a personal automation that can run automatically (i.e. DND, Open App, etc.).

For instance, if you want to run all of your cards whenever you open Safari, create a Personal Automation for Open App > Safari. And have actions be:

I just signed up for the ios14 beta TestFlight on my iPhone XS Max. Will do the same on my iPad Pro 11"

Latest beta of the app (build number 15) has preliminary support for iOS 14 Home screen widgets. App is much more stable now on iOS 14 as well. 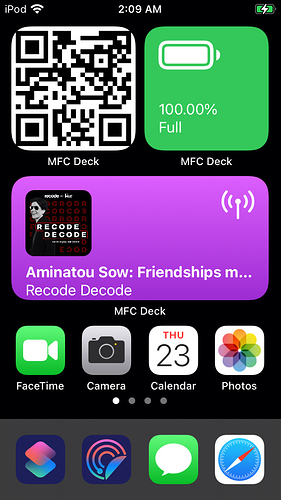