Is it possible to save a Photos image to iCloud Drive?

I have a Shortcut which accepts Files only (it was also Images only but it made no difference), is triggered from a Share sheet and contains only the Save File shortcut.

The Ask where to save switch is on, but when I select an image in Photos, share and then choose my shortcut it never asks where to save the image and simply returns to Photos.

Thanks in advance for any help.

P.S. I’m doing this because I don’t want some photos to live in my Photos library even though they are initially saved there. I have a Dropbox/Hazel combo to whisk files off to the right place on my Mac so they don’t clutter my Photos album. Ideally, after this shortcut succeeds I would delete the image from Photos.

I don’t see a reason for that not working, but perhaps drop a quick look at the start to check what you are passing in.

BUT, for your scenario of choosing a location maybe just save to files direct from the Share Sheet is an easier option? 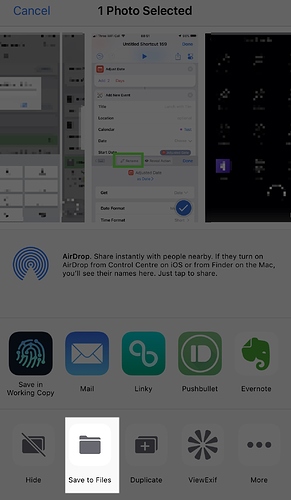 What happens if you allow it to accept anything?

Okay, so I’ve tried this and I can see that no matter what options are selected for valid types, the share from Photos isn’t sharing anything through. The get images from input action also can’t capture anything.

When I add the quick look I suggested above, the receipt shows as a null object. 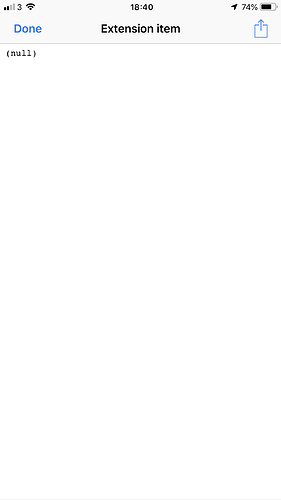 Going a step further and using the content graph we can see that Shortcuts is expecting an image, but isn’t receiving it. 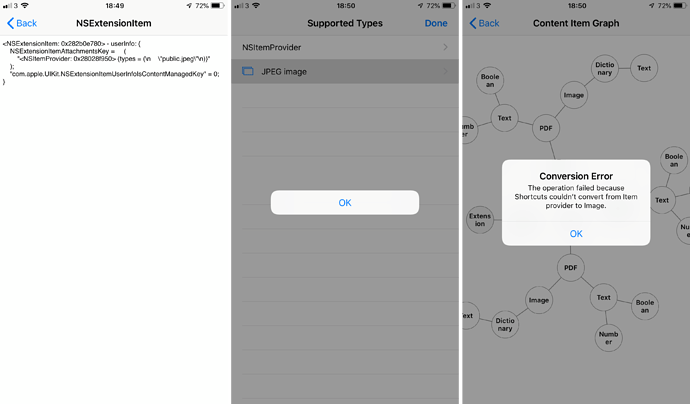 It looks like a bug to me. Maybe someone on the latest beta can confirm if this is fixed in it?

In the interim, my share sheet save to file suggestion should work. Alternatively, you could build a shortcut that let’s you select and process the files entirely within it. i.e. processing the photos independently of the share sheet.

Thanks all so much for your help. Like you too I had received (null) in Quick Look.

I didn’t want to use the Share > Save to Files because, the script above was what I used when my original didn’t work. The intention is that I will just run the action and the image would always be saved to the same location in Files whereas I would have to specify it with Apple’s standard Files save.

I have only started recently using Shortcuts in earnest so misbehaviour makes me think I’ve done something wrong, but this did seem odd. I will log it with Apple.

You didn’t say if the second option was any use.

Say this sort of thing - Select & Save Photos to iCloud.

Apologies, yes it does work just fine. In fact, I’d say it was just as good as a share sheet, but with the added bonus that it actually works! The fact that it does work implies that the Share sheet failure is indeed a bug.

In fact this is even better than the share option as I can have it delete the photos afterwards which is what I would have done anyway.

It turns out that this was indeed a bug that Apple have fixed in Shortcuts 2.2