Shortcuts app. I have several shortcuts I use every day. They manipulate dates and combine them with text and put it all in the clipboard. Some still work, others fail. The ones that fail use the dictionary and ‘choose from’ actions. I reported the problem - is there a workaround or do I have to wait for an OS update?

Federico Viticci reported AppStories the other day (I think that’s where I heard him say it) that Shortcuts in iOS 15 is so buggy and broken that he had to include a special “Technical Issues” section of his review:

Unfortunately, the Shortcuts experience in iOS and iPadOS 15 is hindered by a variety of severe UI and performance bugs that have made this update the least stable and reliable one in recent memory. I believe Apple is aware of these bugs and is actively working on fixing them, but that doesn’t change the core problem: the Shortcuts app shipping with iOS and iPadOS 15.0 is buggy, crashes often, and gets in the way of power users with SwiftUI-related issues that prevent interactions with the editor.

I don’t want this section to read like a feedback report, so I’ll keep it short, but I also think it’s important to point out that the Shortcuts team should have done a better job with app performance and stability this year. For instance, due to a widely reported SwiftUI bug, it’s often impossible to click UI elements in the editor unless you close and reopen it. This bug is so bad, it has made it extremely challenging for me to work on long shortcuts this summer since I’d have to close and reopen the editor (thus losing my position in it) every 30 seconds. I’m astounded this bug shipped to customers.

Alas, there’s a lot more. Sometimes, drag and drop for actions just refuses to work or drops an action in an entirely different spot in the editor. The ‘Run Shortcut’ action – a fantastic tool for power users that lets you use shortcuts as functions – is somewhat broken at the moment and doesn’t always recognize input. The magic variable output of Choose from Menu blocks no longer works. Sometimes, the share sheet sees no input passed from other apps. When I run shortcuts that contain Files actions with the editor open on my iPad, the app crashes.

I could, unfortunately, go on and on with these issues. I’m optimistic that Apple will fix some of them soon, but I’m also disappointed Shortcuts for iOS and iPadOS 15 shipped in this state despite the three months of beta testing and feedback filed by Shortcuts users. These technical issues ruin an otherwise solid update, and I hope this will be a lesson for the Shortcuts team in the future to also prioritize quality assurance in their annual updates.

My experience with the iOS 15 betas was that Shortcuts was broken early, and never got fixed. Not sure how or why they shipped it like this, but I hope they’ll have it in a better shape by the time Shortcuts for Mac is ready for release.

But not necessarily expectation.

What is the issue that you are seeing? Can you provide a link to the (sanitised, if necessary) Shortcuts?

Touch wood, the data has always been in the clipboard once the Shortcut exits.

Edit
Meant to add the image below… 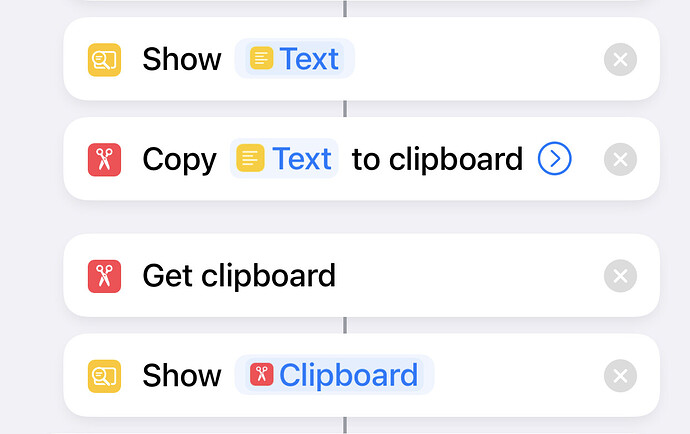 I have several shortcuts with problems. Even one I got from the Shortcuts gallery, it doesn’t work anymore on my iPhone, but it does work on my iPad.

There are also several Shortcuts that crash immediately I can’t even edit them. The common thing is that they collect activity information such as steps and km walked. Even when I try to make a new one it’s crashing.

Thanks, Tony, I’ll try your suggestion.

My problem is with the clipboard as well.

The simplest example is a routine that gets the current date, reformats it, and puts it into the clipboard. In a standalone shortcut it works perfectly. When I use the same set of actions and call it from a ‘choose from’ list, it blanks out the clipboard. As far as I can tell, there is no crash involved.

Thanks again, Tony. Adding ‘show result’ to the end of the routine and replacing ‘theValue’ with ‘Clipboard’ did the trick. You saved me a lot of anguish.

I really want to like Shortcuts, but I have trouble taking it seriously as an automation tool in part because of problems like this.

This isn’t iOS 15 related, but at one point (I think after an update, not positive) Shortcuts decided that the versions on my work and personal phones were different, and made me choose between them. Typically, on one of the versions variable assignments (especially Magic variables) just vanished — or action parameters went blank — but I had no way of telling which. I could keep both, I Irv, but the. I would have had to manually check which was in better shape and delete the other.

Instead, I mostly abandoned Shortcuts, except for a few simple shortcuts that were worth fixing. Otherwise I’ve switched to Scriptable — or just stopped trying to do much on my phone, and stuck with KM, Hammerspoon, Python and similar tools on my Mac.

Until Apple gets serious about treating iOS iPadOS as first-class operating systems —with a genuine file system and more comprehensive automation tools — I fear this kind of thing is going to keep happening.