After upgrading to iOS 16, my open daily journal note shortcut seems to have been broken. I had a simple filter that finds the name, folder, and created today (which is only 1 per day).

Now when I run it, I get a drop down to pick the note. So bummed… 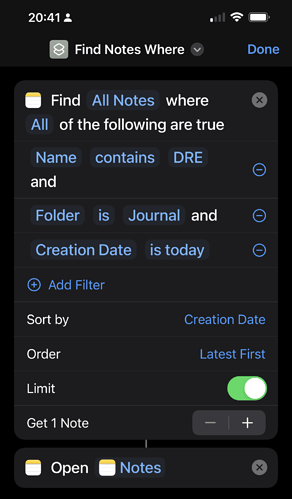 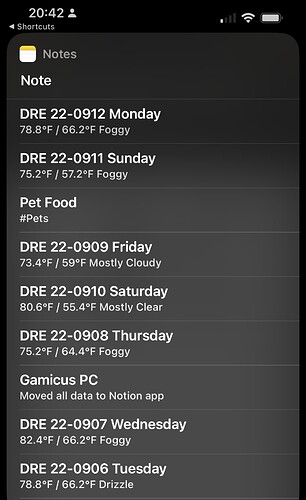 Turns out the “Open Note” action is what’s broken. It’s not accepting the results of previous action so it’s throwing up a menu list for me to manually pick.

I temporarily resolved it by getting the url to the note, then open url in shortcuts. You can get the link to the note by sharing it to an email or something.

I appreciate the tip!

Unfortunately that would be a lot of work everyday, since this shortcut opens a daily journal note (which is created new every morning when my wake up alarm goes off).

@michaelborland nice to hear that someone has created exactly the same workflow that I came up with.
I engineered the process two years back and have been heavily relying on it for my journaling and daily task management.
I have built a specific shortcut that queries a specific note based on a particular rule . The shortcut used to work just fine before iOS 16 and it would output the queried note and open it right away. (My query mainly consist of a particular folder and creation date= today). If the query does not result any value then the shortcut would create a new entry in that particular folder (using if/ otherwise script). Basically I use this as a journaling tool and I create a daily note stored in my Journaling Folder to which I point the query. If no notes have been created yet for a new day, the shortcut would create one (would run a create note with a particular template function), then for the rest of the day, whenever I click on that shortcut, it would keep opening the same created note until the day ends and the clock resets because for the rest of the day the query would output a value ( ie there would be a note that fits the query criteria: found under s specific folder snd created today). Now every time I run the shortcut, I will get a drop down menu with a list of my most recent iCloud notes although under the preview window of my shortcuts it does seem my query is detecting the note, it just can’t open it. My bet is the “open specific note” command is broken and can’t be linked to specific filtering criteria rules. Please help/ major impact on daily productivity (I am using the same logic for a bunch of other daily notes as well for other purposes).

I feel your pain my friend. I opened a support case with Apple, spent an hour on the phone doing troubleshooting and screen sharing, and provided them videos. They said they were aware of the problem and working on it. Hopefully they can fix this soon.

iOS 16 also broke the append to note shortcut action in the same way, regardless of having the “find notes” action before it.

Looks like this might be fixed in 16.1 public b3. I just got a test phone & test user account setup and my “find and open” shortcut works. Going to setup my other shortcuts and test the rest.