How to parse Carrot Weather data in Siri Shortcuts workflow?

Here’s what I would like to do. I would like to get the five-day forecast for a set location (it does not have to be a dynamic location) and then put it in a pre-determined text file in Dropbox. I could use the Dark Sky API, but since Carrot Weather now puts all that data into a Siri Shortcuts action, I would like to pull it from there.

However, I don’t know how to get just the data I want. Any suggestions?

I guess here’s where I admit I am a Shortcuts/Workflow noob.

I don’t know. I don’t know. To me it seems that Carrot is pre-defining the output for us. There doesn’t seem to be a data dump of any kind that is parse-able.

I’ve added a few of the “in-app-shortcuts” inside of Carrot. They show up in my list of Siri Shortcuts, however they don’t have any output unless you have the switch “Show when run” flipped on then, it shows a Carrot formatted display.

I’d be interested to see if anyone else has a different perspective I’m not seeing here.

@DomBett as for your issue, I think you need to go into your Settings > Carrot > Siri & Search > and make sure it’s turned on. Let me know if that was it; it was a while ago I did this.

I think you’re right. (I did figure out my issue and I was being a noob, so thank you.)

in the latest podcast, David and Rose were talking about using Carrot instead of Dark Sky API for the sunrise/sunset calculations in Matt Cassinelli’s Golden Hour shortcut, but it appears that data is only available for the spoken Siri Shortcuts, not in Shortcut workflows. Bummer. I guess I really will have to learn how to parse the Dark Sky API in AppleScript or Ruby or something.

Yeah, I heard that too but only after looking into the Carrot functions myself and thought Rose will be disappointed

As far as parsing an API, it’s really simple, brother. It’s all just text in a fancy format (JSON/Dictionary). Jump in and start playing. Post if you’re getting stuck and someone will help you out. And feel free to hit me up directly too; I’m always up for helping

When you do get into JSON parsing, I’m a huge fan of JSON Editor Online as an aid.

Thank you. What I’m really trying to do is fix a GeekTool geeklet that Brett Terpstra wrote in Ruby that grabbed the data from Weather Underground by getting the data from Dark Sky instead, but that’s a macOS question so I’ll post it there. Thanks!

I get carrot’s sunrise sunset from within a shortcut. What I haven’t figured out is how to take that time ascii(“18:37”) and use it to calculate if, for example, taht’s in the next hour or not. 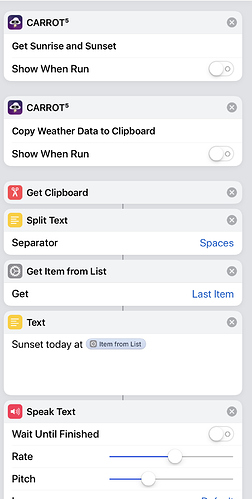 All I can say is: I’m on the CARROT beta and got a little confused about what’s in the current release vs the beta

Plus some more characters to shut up discourse,

After you have “Get Clipboard”, add “Get Dates from Input” and you can manipulate it as a normal date. May require the latest beta though.

But I’ll try it. If it works I’m going to be upper imprssed.

It should definitely work. I modified the Golden Hour shortcut from the Automators podcast to make it work with CARROT and it works perfectly. It is even faster that the actual shortcut in the podcast that was relying on the Dark Sky API.

But to be clear, it requires the version of Carrot Weather that’s still in beta?

Oh right, I guess it’s in the beta just yet… I sometimes forget about it since I’m already used to using the features everyday

No, the shortcut that Nkuutz provided works with the current version of Carrot Weather, it requires that the you ask Carrot to donate the Sunrise & Sunset command via the the in-app Siri Shortcus Setting screen. (I’m not on the beta and wrote a quick proof of concept that did basically the same thing as Nkuutz’s shortcut on the 21st (a.k.a. New Apple Watch & iPhone day).)

Unfortunately, I don’t think the current version of Carrot Weather provides parsable data that extends beyond the current day, for example, the extended forecast which displays a seven day forecast on screen only provides text to the clipboard from the current day. So, getting the five day forecast that you wanted does not seem possible, yet, unless I’ve overlooked something.

“Ask Carrot to donate the Sunrise & Sunset command to Siri.”

Could you spell out for me how that’s done? When I’m in Carrot’s Siri Shortcuts preferences, all I see are options to record a Siri command shortcut, not add the commands to the Siri Shortcuts app.

Recording a Siri command for a given shortcut makes that shortcut available to the Shortcuts app.

As far as I have seen no, you cannot get 5 days forecast apart from the text provided by CARROT.