How to create a single Shortcut to toggle playback/pause of Overcast?

I seem to be missing something, but Overcast only offers Siri Shortcut actions and there are only separate actions for “play” and “pause” and not one that toggles the playback state.

If I keep track of an externally stored state variable (in DataJar or a file in iCloud) it will get out of sync if I use other ways to start/pause playback (in the app, via Control Center/Lock Screen, AirPods longpress, Watch).

Also is there a way to find out which app is playing audio via Shortcuts?

Thanks a lot in advance for your help. I’m pretty sure I’m getting Shortcut blind

Toolbox Pro has an is audio playing action.

Would the now playing play/pause work for you with Overcast?

I have to check out Toolbox Pro

The generic system play/pause toggle only works if I was listening to Overcast last.
My goal is to map the triple back tap to have it continue/pause podcast playback even if I listened to Spotify or other media prior to that.

This doesn’t seem to feasible, though.

If you add the Shortcut from within Overcast, open it in Shortcuts, long press on the specific Overcast action, you get the option to copy it in your desired shortcut to have it, long press on an action and you should get options to paste before or after.

Oh man! I was waiting since yesterday for them to appear in the Overcast tab

I didn’t even see that this actually created Shortcuts in the “all Shortcuts” section. (I’m new to using Siri Shortcuts actions.) 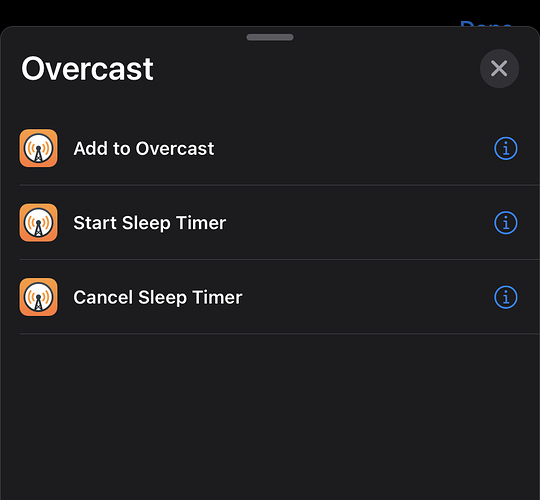 Thank you so much for clearing that up!