How could I set the volume?

Been fiddling around with scriptable, amazing app man. First I thought iOS 13 shortcuts were amazing but then I saw scriptable with full on JavaScript control and was blown away.

Anyways, I can’t seem to find a function or method to set the volume? If there isn’t any method of doing it now, is it like an API limitation that would prevent it form ever being implemented or…?

Thanks in advance for any help/answers, all is appreciated!

There isn’t one at the moment, but many third party audio and video apps are capable of working with device volume settings, so at least that particular volume option should be available through API.

In the interim, you could call out to Shortcuts from Scriptable to make volume adjustments.

@sylumer is right. There’s not currently an API for this but I hope to add it in a further update.

Awesome! Idk why apple made it so that you could only set a value with a slider rather than a variable, so it’d be great to have it in Scriptable. I’d say if its part of the Device library, just add a set and get function, but if its its own library add like get kHz or something, unless that would get flagged as a screen recorder and denied by apple lmao.

Idk why apple made it so that you could only set a value with a slider rather than a variable,

Just on this point, it certainly has been an option in Shortcuts before. I’m not quite on 13 yet (hopefully this weekend). Are you sure you can’t tap and hold to set a magic variable? 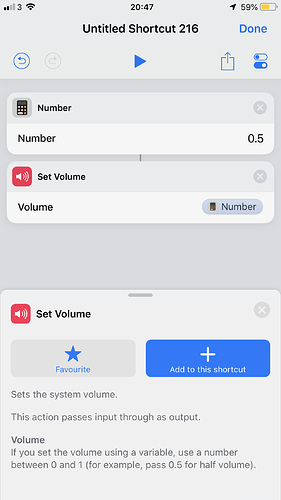 Welp.
Thanks for the tip, never would have figured that out on my own lol.
gotta love apple.