Help With Creating Shortcut to do an Emotional Diary

That’s the symptom, but we can’t see what you have done. Can you share what your shortcut is currently?

So this how it looks in Drafts at the moment 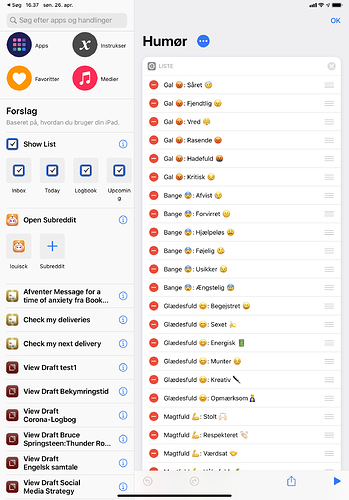 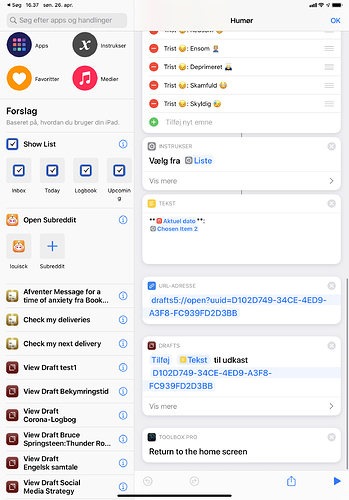 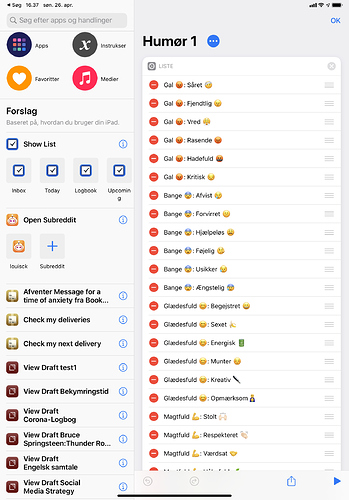 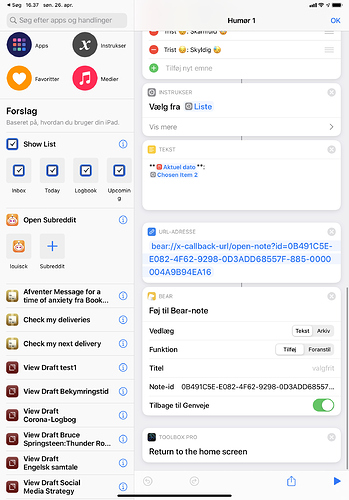 Unfortunately screenshots are not easily tested. Could you consider sharing using the usual sort of link to download? This saves a lot of manual effort trying to re-enter, and it also ensures that any translation based on localisation is automatically carried out for the actions (if not the contents).

Once thing I can immediately see is that you are using URL schemes. Did you try using the built in actions? If not, would you consider trying that?

I am trying to using the built-in actions from Bear. The problem is getting the text field incorporated into the Bear action like it is in the Draft action

Okay, looking at the shortcut I could confirm what the screenshot suggested in that you were passing in a URL to bear rather than the data. I think you just needed to drop that URL action.

I note that the note ID is static and the date format being included in the note is just the time. How are you planning on tracking the day in Bear that any entries relate to? Are you going to share it out to Day One each day and clear the Bear note down to nothing again?

Thanks sylumer that work perfectly!! Now I’m eager to learn what the fastest way to that accumulated Bear note to a new entry in Day One at the end of the day. Any suggestions?

Good idea. However I don’t need to do this every time I run the shortcut during the day, which I do at intervals of up to 6 times at designated times to check in on my mood.

So I need only to transfer all the entries of the day from that note to a new entry in Day One once, which is usually at 10 pm with the last entry

I was suggesting a separate two step shortcut.

Sorry sylumer I’m not a bright guy like. How would that work exactly? Best wishes,
Andreas

By creating a separate two-step shortcut, I mean exactly what that says.I would create a brand new, empty, shortcut and put the two actions described above into it. I would give it a name, etc., and then run that second shortcut after I knew I had made my final entry. Remember that there’s no way the device could know for sure if it was going to be the final entry, so my gut feel is this would be best served by some independent decision step. This could be tied to a bedtime routine (e.g. one that sets a phone alarm), a reminder, etc. It happens independently of the recording.

One fully automated solution would be to use Pushcut’s automation server to run this just before midnight, and then it would be totally hands off (but you would need to consider working in time differences fr run time if you travel internationally).

An alternative approach, which reading between the lines may be what you had in mind but never previously explained, would be if you absolutely knew it was going to occur at or after 10 PM and never before, you could tag this on the end of your logging shortcut with a check on the time. You could prompt yourself with a reminder in any number of ways if you wanted to go this route.

This shortcut includes the two actions nested in the If (just break them out if you want a separate manual shortcut as per the first paragraph), and the If checks the hours of the current time in 24-hour format is greater than 21 (9 PM). If it is, it runs the steps.

Hopefully that all now makes sense.

I just imported and ran it, remembering to change the Bear note-id. But it doesn’t seem to work right. Nothing happens when the press shortcut. Did I miss something?

I’ve added some useful simple debugging actions to a version for you. Try and get the gist so you can debug some things on device going forward.

Hopefully you also got your Bear note reference correct.