Help With Creating Shortcut to do an Emotional Diary

Based on your Shortcut screenshot above (to get the name of your custom shortcut as “Emotional Diary” and what @jayelevy has described in his posts, I believe you should simply copy and paste the following into the title of each of your six Due reminders.

When the reminder comes up, the title should be this URL and should be actionable. When you tap and open the URL it shoudl take you into the Shortcuts app and run the “Emotional Diary” shortcut.

Okay thanks! Now I understand. So I change the title of all the 6 Due reminders to that link? Actually the title of my Siri Shortcut is “Modetjek” so I guess it should be: Shortcuts://run-shortcut?name=Modetjek

Or is that link not correct?

Yes, that URL is correct. You can test this by simply copying the URL and pasting into address field in Safari.

So that seems to be working. I press it on the home screen and it takes me to the Due app where I can press the entry and that opens the Shortcut 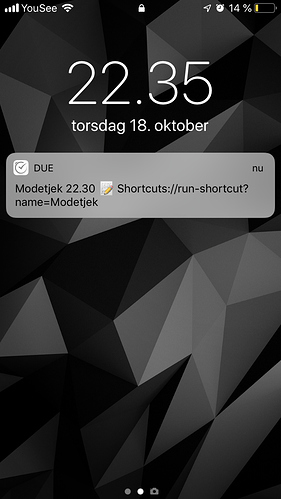 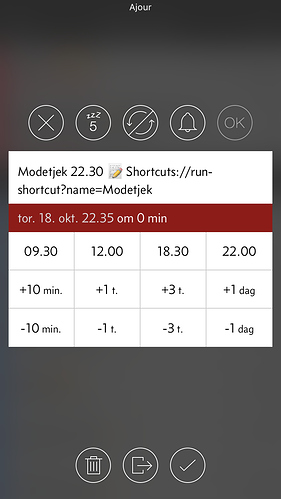 I have a few that do that - extremely handy and a little fun:

This would be great though; several of my reminders “should” open LCP or a specific web page…

So I have been using this workflow for a day now. It is going well. Just a few things that I would like to hear if they could be improved upon.

This Due reminder goes off and I tap it on the Home Screen and open my phone and it opens the reminder in Due where I tap the link. That takes me to the Siri Shortcut where I select the emotion from the list, which quickly opens Drafts and inserts the text and then it goes back to Siri Shortcuts and I press OK and exit the Shortcuts app. However, I have still not completed the Due reminder so I have to go back in to Due and complete that reminder so it doesn’t go off again in 10 mins.

So this workflow could be better if:

Any thoughts out there on how to improve this?

And now I remember why I use LCP for this. It doesn’t have the nagging (yet), but the notification disappears when you execute it.

I wish I had an easy solution for you using Due. You can definitely have Shortcuts do the “Open App” Action and have it open Due though.

Thanks Rose. I will put in an action to have it open Due at the end… I guess it is not possible to have it automatically complete the Due Reminder that began the shortcut

For me, when I use the callback to set the reminder in Due, when it pings me and I tap on it Due marks the reminder complete and launches the Shortcut.

Are you saying you need to mark it complete after writing the Draft, rather than before (when you tap on the first reminder?)

Here’s a couple of screenshots showing what I get.
Tapping on the Shortcut at the top takes me to Due.
Tapping the tick in Due let’s me Mark done and Open Shortcuts… 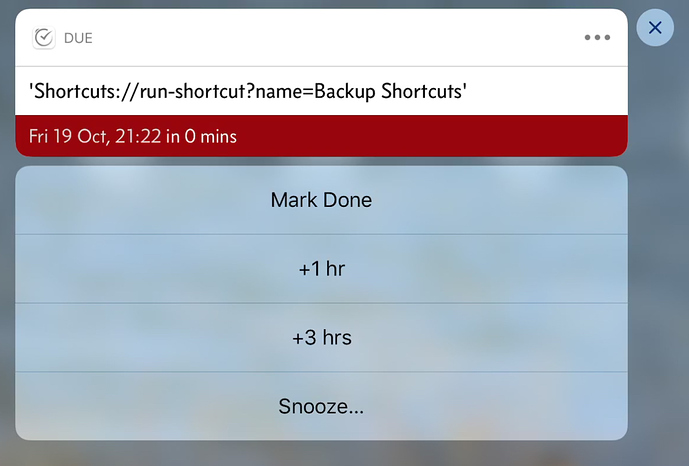 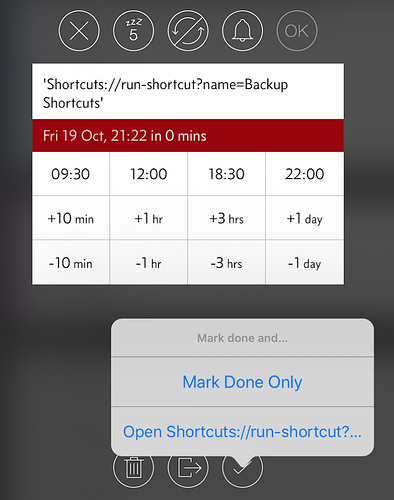 Yes. It does not mark as complete when I tap the link. It just starts the shortcut. Then it sends me to Drafts and return to Shortcuts and now I have set it to open Due back up and I can mark it as compete then, as the final step.

How do you get it to mark as complete right away?

Hmm. I will share my screenshots with you later when I have time. Thanks

Is it a difference in how we’re creating the reminder?

Try setting up your Diary Shortcut as normal, with no mention of Due anywhere.

Then, run this Due Shortcut to set up a reminder in Due (adapted from @jayelevy)
https://www.icloud.com/shortcuts/bbbc9c0930324d87b5cfda36fcd81940
Choose your Diary Shortcut when prompted.

You now have a Due reminder that runs your Diary Shortcut. You don’t need the Due Shortcut anymore, it was just a helper to get your Diary into Due.
If I understand you correctly, that should achieve your goals.

Thanks a lot for your note and help. I’ve decided to not change anything about it. It really works well for me and it’s superfast. I realise that it might be even faster with your suggestions but I just don’t have time at the moment to fiddle anymore with this

It is working really well and the way I want it to. Thanks a lot again and I might come back to your post later on and change it all when I have time.
Have a great day

I might have asked this before, but does anyone know if it is possible to have a Shortcut exit the Shortcuts app and go back to the Home Screen

You probably need Launcher for this, if you open the URL launcher://crash it will open and crash launcher - leaving you on your homescreen.

Thanks Rose. I tried to set it up. But it’s not really working. What am I doing wrong? 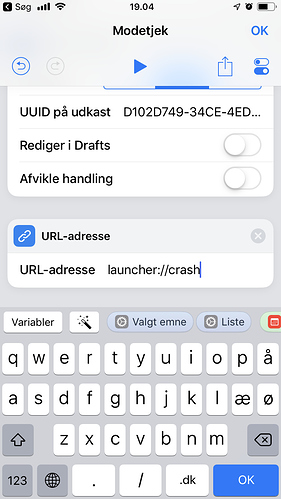 You need to do something with the URL. Add the Open URLs action and you should be good to go.

Sorry I’m a complete beginner at this. How exactly do I do that?

Find the “Open URLs” action in your list (should have a Safari icon) and add it just after your URL action.