Does anyone know of a way to have Hazel upload a file to Evernote? My guess is it is going to require some type of script. Suggestions?

I can think of two ways off the top of my head:

See attached for 2 Hazel Rules I use.

The example on the left watches a folder to create a NEW NOTE attaching the file added to the folder.

The example on the right watches a folder to APPEND to the current note the file added to the folder.

Note… after Evernote processing, both rules delete the file that is added to the folder. I use these folders as a temporary holding spot to facilitate the Hazel rule.

I hope this helps — jay 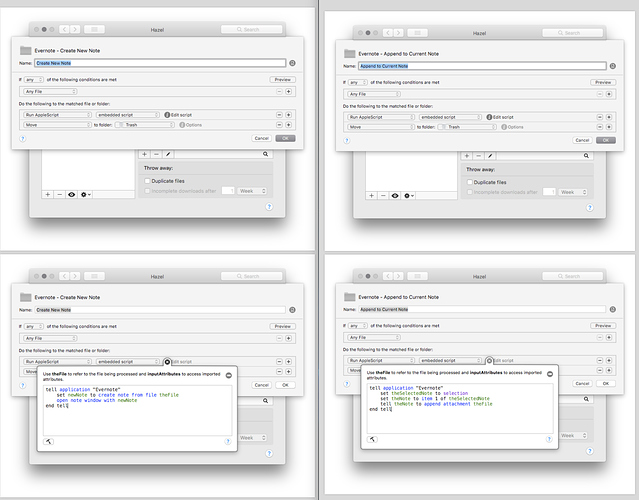 I am really looking for a way for Hazel to handle the complete process. Thanks for the suggestions though.

I have a folder on my desktop Labeled “To Evernote”. Once any file is manually added or automatically through several other Hazel rules, I have it automatically upload the file as a new note in Evernote under the Inbox folder and add a “Scan” tag to the note. Once it has been uploaded, Hazel automatically moves the file to the MacOS trash. Here’s the screenshot:

The script is here:

I got the idea from Asian Efficiency and added the notebook and tag to the Applescript. There are other Hazel rules on that link

that are worth checking out if you’re just getting started with Hazel and automation.

This is exactly what I was looking for thanks!

This will work perfectly - thanks!

Is this script still working for you? I used something similar and it worked flawlessly for a long time. Stopped working in the last few weeks. I then tried your script and receive the same syntax error: Expected end of line, etc. but found application constant or consideration. I will say that I’m pretty clueless about AppleScript in general, but I’m wondering if there was some sort of change in AppleScript syntax that broke this script.

Evernote removed AppleScript support from their latest client app. Any chance you have updated the app recently?

Yes I did. Is that a permanent change or are they working on a fix?

We are continuously developing and updating features… But please be aware that there are a handful of features—such as AppleScript, import folders, and the ability to edit note creation dates—that are not yet available. If your workflow depends on these features, you can continue to use our legacy apps.

Using the “Legacy” version and adapting the tell command will work. See more detail in this post

Thanks. Unless I’m missing something it looks like they still haven’t returned the AppleScript feature.

I have stopped tracking their progress, or lack thereof. After many many years, I gave up on Evernote a year or 2 ago. Moved everything to Apple Notes and haven’t looked back. Very thankful I made the transition.