Get Current Album not working when playing from a Playlist

I’ve been watching David Sparks’ shortcuts field guide, but I am having trouble with one of the examples that he walked through. When wanting to create a shortcut to play the current album, if a playlist is playing, it doesn’t get the correct album. If I am just playing music with no playlist, it seems to work fine.

It looks like if it is getting the current song, it shouldn’t matter if it is playing from a playlist or not. Any ideas or suggestions would be appreciated.

Hi,
I think we’d need to see what you have to know for sure what’s going wrong.
Try either sharing the shortcut or showing images of the offending steps. 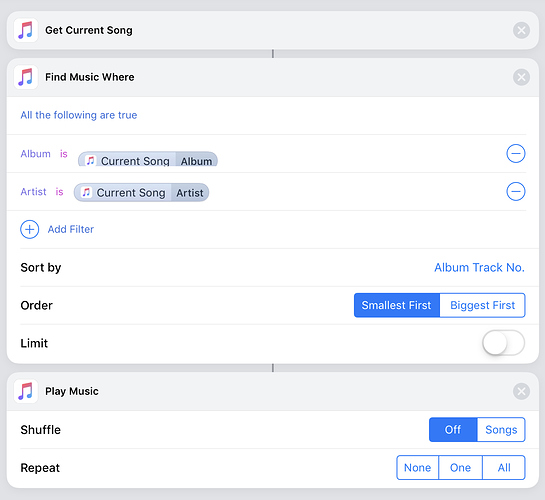 This grabs the album and artist for the currently playing song, finds songs based on that, puts them in track order, and plays them.

It does require the music is available locally.

This is what I currently have. I will modify mine to match what was just posted and try that. Thanks

When I modified my shortcut to match the one that you posted, when the current song finishes, it continues to play the next song in the playlist (by another artist) instead of playing the current album of the current artist.

I am attaching a screenshot of my latest shortcut.

The current song variable in the album search line here is the song - rather than the album of the song. I believe this is the root of your problem, tap on the variable and make sure to select the album info in it

I made the changes but am still getting the same results. I have attached a current screenshot.

Well the shortcut I posted works fine for me. It plays the album tracks, not the playlist it was playing. I’ve just doble checked it to be sure.

In addition to the point @RosemaryOrchard made, I note that you are sorting by rating. Is that intentional?

In terms of figuring out what is going on, we’d need to understand what data is being passed to the Play Music action.

A nice visual way to do this is to (temporarily) add a choose from list entry before the play music action. 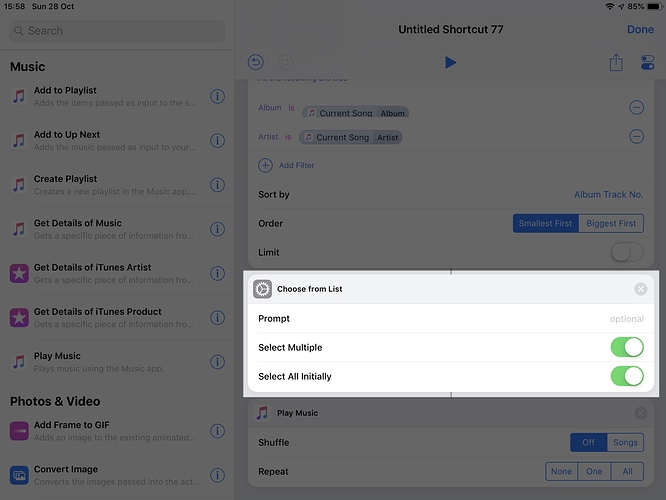 Then when you run it you’ll see a nice list songs being passed to the next step. That is what should be played by the shortcut. It should give a strong indication as to what is going on that we’re not seeing yet. Just post a screenshot of it. 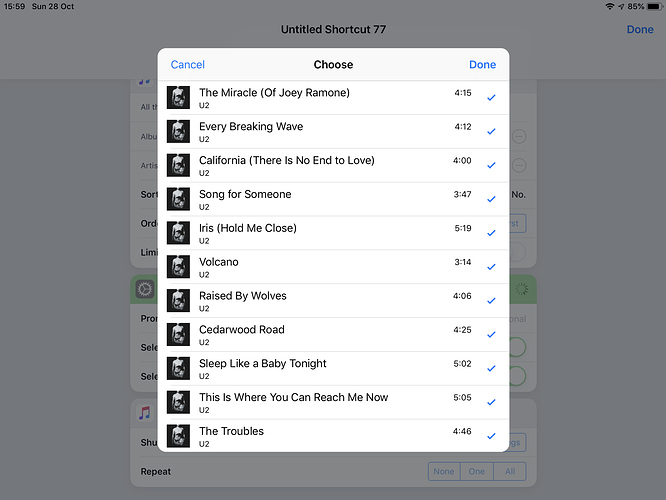 Thanks @slyumer. I was sorting by rating to play the most popular songs from that album first.

I will add the steps you posted for troubleshooting and will post results. Thank you so much. What a great community!

After making those changes, I have determined that the shortcut isn’t running at all. That’s why the current album never plays. I didn’t get the prompt from the list. I’m sending a link to the shortcut for your review.

You need to run the Shortcut yourself, when I run it it works for me.

Let me make sure I’m doing this correctly.

The screen slightly flashes, but I never get the menu. My original playlist continues to play. I know two of you have now run it with no issues, so the shortcut must be fine. I just don’t know why it won’t run on my device. As a next troubleshooting step, I will run it on another device and see if I get the same results.

Also try running this whilst your playlist is playing in Apple Music.

It should display info about the song. If it can’t find anything it will still display; just with blank entries against everything.

This should give you some additional idea anout where the issue lies as in all cases you should see some text displayed on your screen.

After that it might be a case of you recording a video, with the built in iOS screen recording feature, so we might get a clue from how it is running.

@sylumer Well, I must have missed your statement in the earlier post that said the songs had to be local. I had the playlist downloaded but the idea that I was thinking about was if I was listening to a playlist that dynamically updates from Apple Music, and I heard a song that I liked by certain artist, I would activate the new shortcut that would go out to Apple Music and stream the current Album of that artist.

Once I downloaded that Album, the shortcut worked perfectly. It probably doesn’t work like I thought it would, but having to have the music downloaded ahead of time kind of defeats the purpose of me hearing something that I like and wanting to hear more from that same artist.

Thanks for everyone’s help! @RosemaryOrchard

Glad you got it sorted