Dummy has basic question: how to set folder path in AppleScript

Hello and sorry for a basic question.

The problematic line of AppleScript is

Let’s say that I want to set folder path to my downloads folder:
/Users/cyrus/Downloads

If it is not asking too much, I would be grateful if you could clarify the syntax of set _folderPath to my makeTempFolder()

“my” means that it’s a handler/function defined in the AppleScript, not a one defined in some scripting extension etc

() indicates that makeTempFolder() is call to a function/handler and not a variable. You should be able to find makeTempFolder defined in the AppleScript

thank you very much.
this is the apple script. I have no clue how to enter the path. I tried all kinds of combinations.
I cannot find where makeTempFolder is defined in the AppleScript, now do I know how to define it.

You don’t have to do anything, the function creates a temporary folder and use it. I haven’t tried the script but it should work as is.

Just to build on the explanations by @jemostrom with an example, you can see the path being created and set to the variable if you do a simple test like this to see the content of the _folderPath variable: 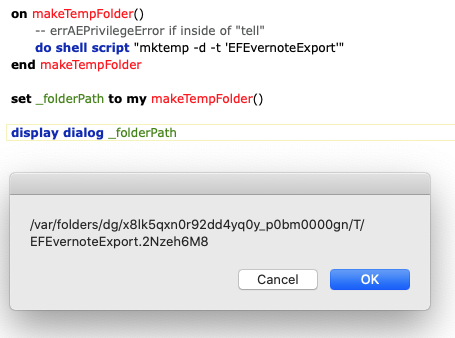 Each time you run it, you should get a new path. You can read about the mktemp shell command being run here:

If you really wanted to use a common path of your own as above, you could skip the creation of a temporary folder and set it directly to the variable.

thank you both for your comments

The script runs perfectly. Evernote exports each note in sequence as displayed in the activity window.

However, the script crashes at the very end, probably (my guess) when the folder is being created. 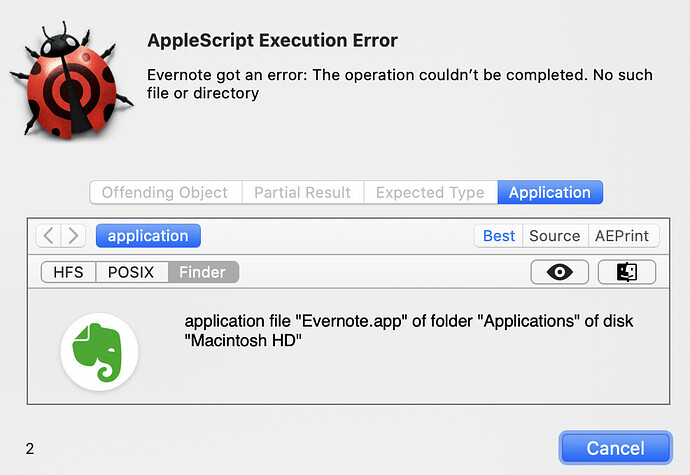 thank you for your detailed comment
as soon as I run the script, I get an error
that being said, the display path idea is excellent 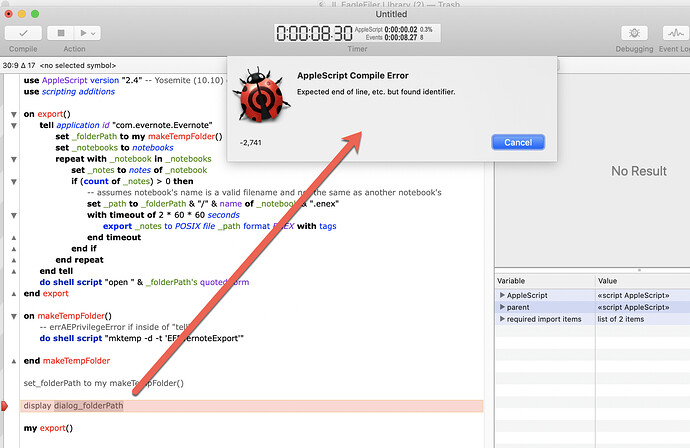 You have missed a space after “dialog”, and it isn’t creating a folder like the ten folder creation shell command, it’s setting a variable to the output folder path. That would need to exist.

Also note most of your code is in export but in the example above you have moved some outside it, so you’ll be getting two temp folders with what you have and you are displaying the one Evernote is not using.

I’m sorry, I don’t understand. If you want to stop there I totally understand. I have taken enough of your time and patience

You look to be combining previous points in an unusual way and with incorrect syntax, so let’s take a step back and see if we can get you back on track.

What are you ultimately trying to do here?

I want to convert my evernote notes to EagleFiler.

Here is the script.

If I follow your approach, you are right, I am making contorted amateur attempts at solving a problem without having described the problem.

. the script seems to run flawlessly sorting through and exporting evernote notebooks and notes (I see it on the evernote activity window)
, at the end the script crashes with the error message below. I think that the crash is at the stage of the temp folder creation because it happens at the end, the error message mentions file or directory and I am unable to find a EFEvernoteExport folder in my Mac after the script runs.

So you are right, my questions represent my amateur attempts at troubleshooting the problem. I should have described the problem in the first place 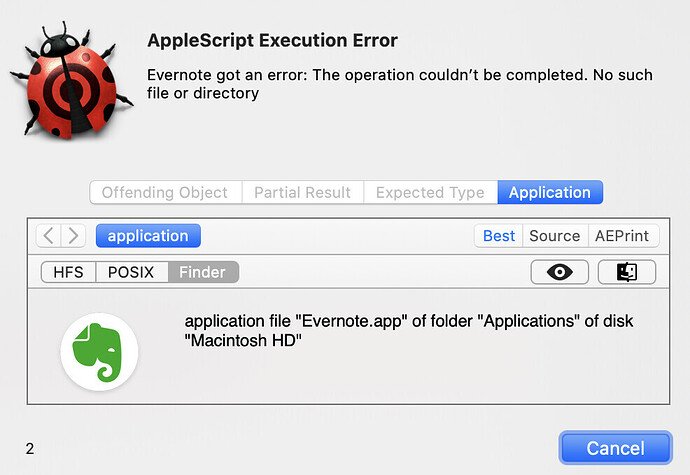 Right, let’s take a simplified approach with a script based on the script you shared originally.

Give it a try and see how you get on.

thanks very much. When I read your post, I had just started running another version of the script. As soon as it is complete, I will run your script.

I ran the script a few times.

What version of the Evernote app do you have?

For the notebook it gets to and fails on, any chance it is named named something that might be interpreted as a different file path? E.g. If it contained a forward slash.

what does MAX_SIZE refer to? number of notes ?

If I want to take out the MAX SIZE and zero count checks, how should I edit the script ?
Should I simply take this out ?

Don’t remove anything just follow my instructions and change it to a larger number. E.g. 999999

What you suggested would be insufficient in one respectand remove essential code too!

What you suggested would be insufficient in one respectand remove essential code too!

No wonder my spouse says I am an idiot !

I am reviewing the notebook names one by one. I already found names with “/” “,” and “→ ”
I will rerun the script after cleaning up the 500 notebook names.

So everything works now, all thanks to you. Praise sylumer !