Does anyone know of a shortcut where it’s possible to delete all the alarms iPhone creates in the Clock app? I can see a ‘Get all Alarms’ element but nothing about deleting them. Thanks, Brian

You could toggle the alarm on/off in Shortcuts or create a new one, but not delete one. I think you can still trigger Siri to remove all alarms - but that’s not directly accessible to Shortcuts.

I couldn’t figure this out either!

I’ve got a shortcut I use for my daytime power naps.

I just end up with heaps of alarms at different times all around 2pm I have to go in and delete every now and then!

Instead of using an alarm, how about using a timer? iOS only allows a single timer, so you don’t end up with a string of timers in the same way as alarms. If using iOS timers, just ensure that the notification sound is not set to Stop Playing otherwise you won’t get any sounds (this can’t be set in the Shortcut) and is persistent when set.

You could instead use an app like Just Timers where you can create new timers that “self destruct” once you silence them or create a specific nap timer if it is always of the same duration. Just remember to add the app to your Focus Mode to allow notifications or use the Critical Alerts feature in the timer and your Focus Mode. Just Timers can also run a Shortcut once the timer is complete, so it could turn off the background noise you have running and set the Focus Mode back to a different “non-nap” mode.

Instead of using an alarm, how about using a timer?

Keep in mind alarms are for a specific time and may repeat whereas timers are for for non-repeating specific durations. The overlap in equivalence is actually narrower than might first be a expected.

But Just Timers is a great app for timer automation

The only reason I suggested a timer approach was that @Danny_Pettiona mentioned a new alarm was created depending upon input and that the alarms were all around 2pm making it sound like they were for a duration rather than a time. The comment that all the alarms need deleting once in a while made me (rightly or wrongly) think that a new alarm is created for each nap, not that a repeating alarm is wanted. My basic understanding of power naps is that they tend to be for a set period of time depending on some specific factors, which may be better suited to a timer rather than calculating an end time from a duration.

Just another approach that may or may not help.

I was matching it back to the original post by @BrianOxley on alarms. I’d missed it was a reply on @Danny_Pettiona’s subsequent post

I probably should have tagged him as well to make it a bit clearer.

Thanks to everyone for their replies. I think I’ll just ask Siri to clear them each week. I’d forgotten Siri could do that.

You’re correct - naps are for a duration (and the ‘start’ time can slightly differ each day) so a timer makes much more sense!

The limitations on alarms have been a real pain, and I am hoping there is some improvement in iOS 16. I end up with multiple alarms for the same time and with the same name because there really is not way to say “if this alarm exists, run it on, otherwise, create it” so, I have to create it.

I found this work for me: 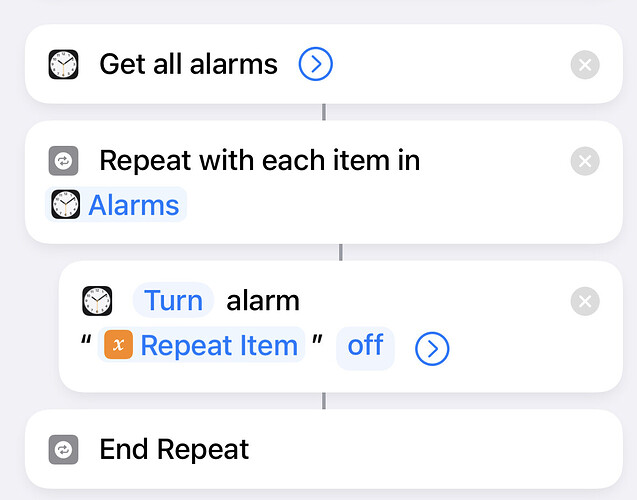 Is that not just turning off all alarms rather than deleting alarms?

Uhm, test it! I’m using Bedtime so for me it works by disable the alarm, and the day after it’s still here again, but it should disable only the alarm if I remember correct.

My understanding of Shortcuts is pretty reasonable (FWIW I’m actually a guest on David’s most recent Shortcuts field guide if you need some independent assertion of my knowledge). I could tell what it was doing and my question was more aimed at what you suggest is not at all the same as what the OP was asking for.

Another reason I opt not to test it is because I don’t wish to blanket disable all of my alarms. I have a range of them, some standalone set manually and by shortcuts, and some on repeat.

I just tested with multiple alarms and it and it works by disabling all the alarms, not by deleting them.

What was your solution? @BrianOxley