Given a number like 23456 how would I convert that to a number of hours and minutes.

I though that displaying the. Umber as a date how long ago/until would work, but it doesn’t.

Even here, the alert (set to date ago/until) is empty.

I seem to be having issues wrapping my head around how Shortcuts manages date conversion. 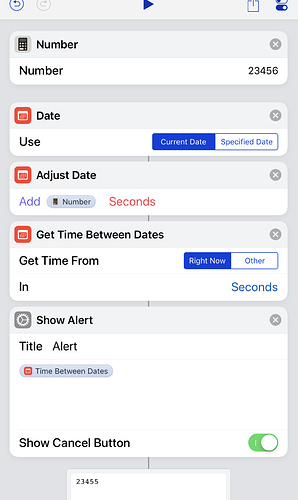 Maybe you are wanting to do something like this? 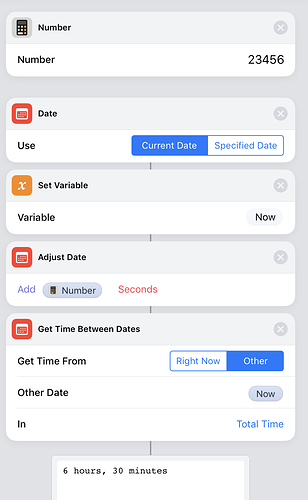 You could then parse that into an HH:mm format.

And if I try to format the total time output as a hh:mm using custom date, 6 hours and 30 minutes becomes (current time + 6:30)

Using “Now” I’m just being precise as I use that exact point in time twice.

I would parse the result as a string. It is. It isn’t a point in time, it is an elapsed or length of time. Not the same thing. You can’t treat it as a date/time - it isn’t one.

To draw a physical place sort of analogy, think of it like a date time is a location and the time length is a distance. Location and distance are not the same thing.

Before anyone wades in with space-time equivalence, I already know. I studied a lot of relativistic mechanics at university.

But, it’s inconsistent. If you use Totla time you get a time, which you can then display as a date which is (current date + total time). But you can’t do the calculation to be some other date value (like since/until) at all, even though that would make perfect sense given how total time works.

It’s hard for me to grok what is and is not going to work, so I keep running into this.

Get time between dates has these options for output. 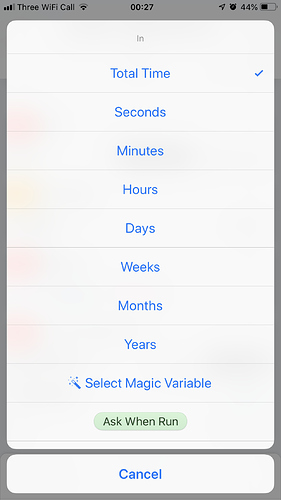 None of them are dates.

The documentation explicitly states it outputs a number. Not a date. 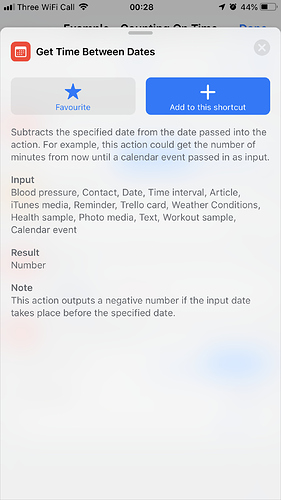 What are you referring to such that this value is a date/time?

The result of get Time Between Dates is a number. The “In” parameter determines how that number is presented. In this case it is representing it as a string with multiple parts that equate to the whole. Think about “6 hours and 30 minutes”. That could be expressed as “90 m”, “6.5 hours”, “6 30’ 0"”, or “06:30:00”. It can’t be expressed as “New Year’s Day”, “tomorrow at noon”, or “now”, without first being given a point of origin on a time line and a direction. It needs a vector based expression.

You were asking for hh:mm. I figured giving you the format you could parse rather than expressing it as say purely minutes would be better as then you just had one thing to parse rather than multiple iterations to carry out to get multiple parts, or getting no further.

The alternative over all of this is a set of modulus based arithmetic on the original number.