Can iBeacons turn my office light on/off when I enter the room?

I have a habit of leaving my office lights on when I leave my office.

My wife has a habit of asking me “Did you mean to leave your office light on?” (the answer to which is never ‘yes’ but she insists on asking).

I was thinking of putting an iBeacon or some other Bluetooth “thing” in my office which would let me set a “scene” when I enter the office and when I leave the office, that way we could avoid repeating this conversation.

However, it’s very difficult to figure out if this is actually possible or not.

iBeacons never really seem to have caught on. I know I could do this with NFC tags, but I’d rather not have to do anything other than leave / enter the room with my iPhone if that is possible.

My experiments have shown me that iBeacons aren’t very accurate. Two examples:

In 1985, when I first joined IBM, our South Bank office had lights that were controlled by motion detection. I have to believe such detectors exist now - and can be interfaced to Home Automation.

In my experience, this is a very “it depends” situation. I did a little playing around with a similar automation idea with iBeacons after the Automators episode that made me spend money on them. I found that it was very dependent on office location and the configuration of the space around it. At home, I had problems similar to what @Martin_Packer describes. My home office is in our basement. When I would walk in the area above the office on the first floor, the iBeacon would sometimes trigger and I couldn’t dial down the signal range enough to make it work only in the office space.

At work, I had much more success – my office is on the top floor of a three story building and I virtually never go into the space directly below. There I was able to pretty successfully get the iBeacon to trigger when and only when I approached or left my office.

I do suspect that iBeacon quality is going to be key to the sort of single room control you’re talking about given the fine grained strength of signal needs. I was playing around with the Estimote beacons.

I only know the basic physics about RF, but shouldn’t you be able to buy/build something that “shapes” the active area by blocking signals from certain directions? I’m pretty sure that museums would have to use some kind of wave guide or shielding to make many displays in a dense area work as expected. Something home made might not completely block reception, but it might attenuate it enough that with careful positioning it’s not a problem.

Also @Mark_K 's point about bacon quality should be carefully considered. My cursory research indicated that some beacons are good at reporting range, and some are not.

I have used a RadBeacon USB (https://store.radiusnetworks.com/collections/all/products/radbeacon-usb-2) for something similar to this. I have this beacon plugged into a USB port in my truck, and when I unlock the doors of my truck, it is powered on. When I am in range of the beacon it triggers an action on my iPhone that checks my calendar for events and prompts me to choose where I am going next. When I choose an option, it plugs the address into maps and get directions for me. Then I plug my phone into Apple CarPlay, it is all ready for me.

My point in posting is to say that the RadBeacon USB “Transmit Power” is configurable from 0dBm to -20dBm. I am a software developer, not a radio frequency expert, so I don’t know the details of how powerful these values are or what correlation they would have with the transmission distance. However, I am thinking that you may be able to configure this beacon’s (or another) power to transmit only within the confines of your office as opposed to the room next door. I have not played around with the power settings on the beacon because I want it to transmit to the greatest distance, so I have the power set to the maximum.

I have a motion detecting light switch in my work office - it’s been there since at least 2008. It provides the functionality described without any BT.

I used tin foil once - more to attenuate the signal than to direct it. It didn’t work.

Some beacons have a wider TX range and can be set to -40 dBm. That should make the signal stay within the office space and not be readable from downstairs.

As another user pointed out, you can use something metal and thick (not aluminum foil) below the beacon to partially block the signal as well. Even a thick wood desk top can partially block signals. I don’t think this will be needed though if you set TX to -40.

Another point someone made is also true: the orientation of the beacon effects the signal strength is specific directions. This is due to the internal antenna being asymmetrically-oriented on the circuit board. It’s different for each type of beacon due to different board/antenna layouts. Try measuring the RSSI (using a free app such as LightBlue) of the beacon from 3 meters away using your phone. Write that number down (or better yet, the average of ten figures), then change the orientation of the beacon. See how the RSSI changes. It might be stronger or weaker. Continue those measurements in some sort of logical manner until you figure out your specific beacon’s “strong direction” and “weak direction”. Then use that knowledge to dial in your setup.

I returned the beacons and bought a Philips Hue Smart Dimmer Switch and Remote instead: 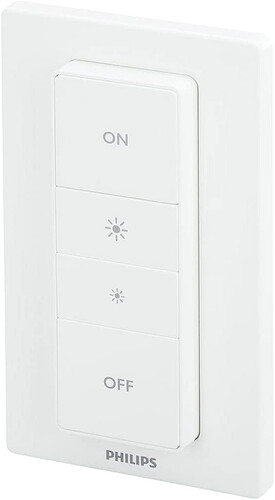 I affixed it to the outside frame of the door (that is, so it’s visible when the door is closed).

I set the top 3 buttons to 3 different “scenes” and the bottom button is just “Off” so if my wife walks by the office and I’m not in there, she can just push the button and turn off the lights, and not have to ask “Are you done in the office?” which was my primary goal of this entire endeavor in the first place.

Possible Bonus: A Visible “Do Not Disturb” Indicator

As a bonus, the actual “Remote Control” part actually comes off the base (it attaches with magnets), so I’ve told my wife and son that if the door is closed and the remote control part is not on the base, it means that I’m in the middle of something and can’t be interrupted, barring emergency.

(My son asked, “Why don’t you get just an ‘ON THE AIR’ sign?” To which I replied, “I looked, and if they had one that I could control with HomeKit, I would have bought one.")

Since I obviously have to go to the door to close the door and the remote is right there, it makes it a pretty easy system. I guess we’ll see how that part works in practice, but the quick & easy ability to turn the lights on/off was the main goal. This isn’t quite as “automated” as I wish, but it should be less error-prone, and it took a lot less time to get it set up.

My son asked, “Why don’t you get just an ‘ON THE AIR’ sign?” To which I replied, “I looked, and if they had one that I could control with HomeKit, I would have bought one."

I’m looking at a bunch right now. Fortunately, they all seem to have normal plugs so I can just attach it to a HomeKit outlet.

Assuming that they will turn on when power is restored. An annoying number of devices require a physical button push to turn something on, even if it was on when power was cut.

At least in my (admittedly limited) experience.

As you moved onto the Phillips system, you can do what I do which is to get a motion detector app, and have it face my desk. It turns on when I walk in the door, and it stays active because as long as I’m at my desk, even quietly typing, it registers that as motion to keep the light on. When I leave, I have it set to turn off three minutes after it stops sensing motion.

Works like a charm for what I think you want, because you don’t have to do anything other than walk out the door.