In this episode, our intrepid Automators dive into email and cover the best ways to get your Mac, iOS devices, and the web wrangling your email for you.

Great episode!
Small correction, David, you forgot the workflow-link to Rose’s workflow to mail the last taken image on your macsparky-post…

Is this in the video or the podcast?

Just in the videos, the volume levelling in the podcast is spot on

Example: I have several service providers who email me when a new receipt is available, without adding that receipt to their email. I have to download the receipt manually from their site when I want to archive it. I use a Sieve script to automatically add an action to Remember The Milk (RTM), my trusted GTD system:

Whenever I get an email with the title “Your receipt” from email address "no-reply@provider.com" FastMail will send a newly generated email to my RTM import email address with a title confirming to the RTM Smart Add syntax to make sure that a task “Archive Provider receipt” to the list “Personal” with the tags “now” and “@pc” for location “Home” and URL “https://www.provider.com/receipts”.

Note: this happens server side, so no manual action in an email client needed

I’ve been using FastMail for years and had no idea about the Sieve Scripting! I’ll have to look into this!

Re: the guy at David’s daughter’s school not using BCC

During my student teaching last year, this was an unfortunately common practice. Not out of ignorance, however, but because of problems with spam filters when everyone was set to BCC (not sure if it was on the school end or the parent end, but the stated explanation was based on how many people were BCCed.) It was a G Suite school for what it’s worth. The real problem is the lack of listservs in education in 2018 (popular school grade/info provider PowerSchool gutted listservs built into the class lists, and as someone who just set up half a dozen without any users even, Google Groups is more than a bit tedious as a solution)

I would love to do the “older than x days” tip to get rid of older crud clogging up my inbox but in the new layout of Gmail the “create a filter from this search” link is missing? How do I do it without it?? 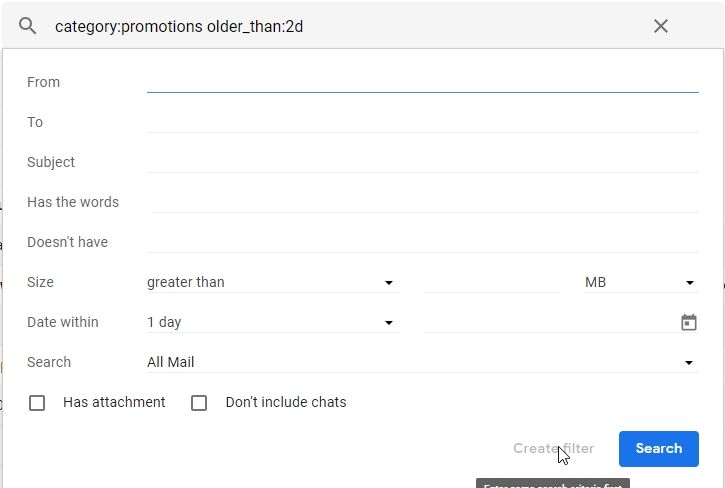 Hi, I’m starting to dabble into TextExpander and AppleScript, adapting the provided snippets and scripts to my needs, but I cant seem to use the applescripts correctly.

As an example, I wanted to edit Davids “recipients name script” and add an “else” parameter, when the recipients name consists of 3 words (fe. “Dr. John Smith”) to return the third word from the name, but I cannot get it to work. This is what I tried:

Doesn’t work. Can someone help? Thanks!

Looks like you have a nested if, outer level checking a UI element existence and the inner one the length of the name. But the additional check for the name has been applied to the outer level if.

Try getting rid of the else.

One of the ways I’ve automated my email is by developing a 100% hands-off approach to dealing with receipt emails. i.e. Receipts I get from online services like MailChimp I have a detailed description of the workflow here, but in summary:

So after receiving one of these emails I usually just check my MacOS notifications to confirm that Hazel processed the file and I can simply archive the email.

It’s a handy workflow and because I receive a fair few emails like this, it saves me a fair bit of time each month.

That did the trick, thanks!

Not a textexpander subscriber so used keyboard Maestro for my apple mail automation.

@RosemaryOrchard I dont suppose its possible to share the macro for using KM to create and send an email based on a file being there? BTW loving the show!

I downloaded David’s Auto+Name+Email.textexpander snippet, but I don’t use Mail.app. I use Kiwi for Gmail. I substituted that for Mail (as per below) but it doesn’t work. Any suggestions?

It doesn’t look like they have AppleScript support so you may be out of luck I’m afraid.

Thanks Rosemary. I have asked them (Zive Inc.) and they said that AS support is not currently planned, but they will consider it for the future.

Enjoyed the email show very much. I use MailMate on macOS for my email client; one of its cool features is that it has a command-line executable, so it is script-friendly.

I use it with both Hazel (it sends an email to my wife when I download my Esso invoice) and with Keyboard Maestro. I have my own business and create invoices for my clients twice a month as PDFs. In Billings Pro, where the invoices are created, I have a custom invoice form that includes the recipient email address (in white so that it does not display on the page). I then go to the folder they’re stored in, select all and run a KM macro (which calls a Python script - with thanks to Dr Drang) via a keyboard combination - this reads the addresses, creates an email to each recipient (and adds a cc if required) and moves to the MailMate window where I can edit the message(s) if required before hitting Send. I could also automatically send them, but prefer to review first.

Thanks, David and Rose, for a very interesting new show (and for the additional accent!) - I’m finding them most illuminating.

Hi Guys,
I was inspired by Davids simple AppleScript to start the email with the receivers first name but for the Airmail app rather than Apple Mail. What I thought was going to be simple turned out to be anything but. I can’t seem to consistently get it working for the email address in the outgoing message. Its now turning into a bit of a quest for me.

I had some success using Sender as per script below:

What I would really like is if someone has found a solution to showing the current recipient of the current outgoing message as both of the above have mixed results (I think the above is for the selected message that you are replying to and not the actual reply but I might be wrong on this).

Apologies if I have posted this in the wrong place and for any lack of scripting knowledge, just trying to solve a problem