In this episode of Automators Rose and David dive into the recent and upcoming updates to Shortcuts. They nerd out on weather and notes, as well as their love for the dictionary updates!

@rosemaryorchard, related to the discussion on multiplying alarms, you can just ask Siri to delete all the alarms. She will ask you to confirm, then you have a clean slate.

@RosemaryOrchard can you explain what you and David were talking about with the notes? You guys said in the next update the notes will do so and so. It’s probably basic I just didn’t understand. Thanks

Wasn’t it just that there are going to be more options for working with notes over the actions currently available - i.e. create. The next release should offer options to, for example, update an existing note.

there are going to be more options for working with notes over the actions currently available - i.e. create. The next release should offer options to, for example, update an existing note.

That’s exactly it! These are new actions which will be in the next release

I heard the podcast and went straight to shortcuts to see if I could append to apples note app but nothing yet. Can’t wait… will be great for me . I use it for temporary travel cash expenses, and I have my movie list that people recommend, even a to do list on notes… I love that app and been able to create shortcuts that would be awesome…

Great ep! In thinking about the future of shortcuts, as you both did at the end of the show, is there some chance that Automator one day gets “folded into” Shortcuts and becomes a unified product across macOS and iOS?

*I’m being intentionally imprecise with this. “Folded into” could me Automator gets abandoned and Shortcuts appears on the Mac; Automator just gets rebranded as Shortcuts; or somehow there is a melding of the functionality of the two. I realize the technical challenges inherent in this plus the challenge of developing a tool that would enable people who rely heavily on Automator to migrate their automator workflows, services, and the like into the Shortcuts framework.

Wouldn’t it be grand to see Shortcuts become as powerful and flexible on iOS as AppleScript is on the Mac? (I am, of course, mindful of Siracusa’s depressing comments on the likelihood of such a development.)

For anyone waiting on the discussed pending update to Shortcuts, you should find that it’s out now. 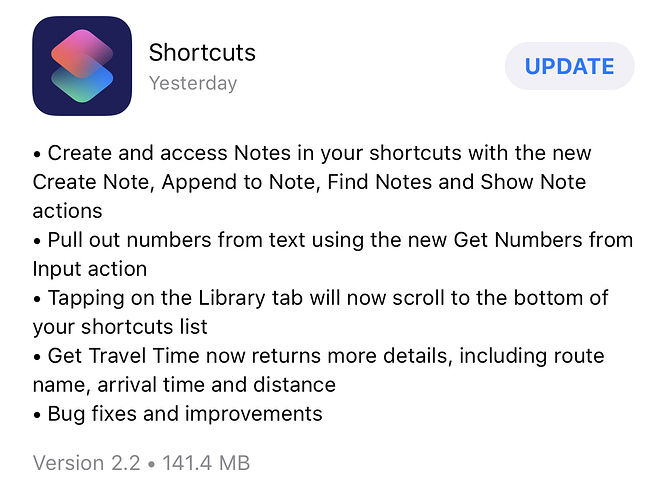 You can also ask Siri to deactivate all alarms. In my Shortcuts just set alarms, I also add a command to set the volume because over the course of the day my volume goes up and down