This week David and Rose come to us live from PodCon with a very enthusiastic audience where they take the opportunity to dive into some of their travel automation setups. Once back in the studio they then go through the feedback they've received.

I started to reply to this topic re the travel workflows but…erm…it got a little out of control, so I split it into a separate post:

Hi all, In light of the latest episode I thought it was time to share some of the travel workflows I have been working on. I have been intending to write some of these up properly but haven’t got around to it yet so I thought I’d at least put this out there as a start! (I initially started this as a reply to the episode post, but then it grew and I thought perhaps I should split it out in its own.) This is in the iOS category but some of these have a bit going on on macOS as well. I’m from Aus…

Great Episode! @MacSparky I can’t get your “Here I am” shortcut to work , it won’t use my location. any ideas how to get it to work?

I made that one (based on what David said), it has been working for me - have you checked your permissions to make sure that Shortcuts can get your permission?

@Jjm I think it needs the “Nothing” step removing otherwise there is no data passed into the message. The other option is to specify the output (magic) variable in the body of the text step. You can also specify the phone number in the text action step.

That doesn’t seem quite right either… I think you have specified the wrong bit of the address in the Location variable. When I run it, the text of the message just reads “Location”. I think you either need the the “Full Address” part of the Location magic variable, or just remove the magic variable and the “Nothing” input, which then just seems to pass the full address through to the message text by default.

@Tony I also just get the word “location” that’s it.

It depends on where you are - for places with a name it works (e.g. at work it tells me the name of the place). However if your house/current location doesn’t have a name that’s available to Apple maps then it won’t work - you would have to use the first line of the address in the magic variable.

One tweak I wanted to incorporate was the ability to revise lists or add new lists without having to edit the shortcut itself.

I revised RMO’s base shortcut so that text files are read into her dictionary scheme. To create a new list (like the Podcasting Equipment modification she demonstrated in her Youtube screencast), you create a new text file titled Podcasting Equipment and then list the various items to pack as separate lines in that text file. The shortcut reads all the text files that reside at a user defined path on their iCloud Drive (e.g. /Shortcuts/Pack).

I also added a prompt for a list name, so that the list becomes its own project in OmniFocus

The shortcut itself is here. Another shortcut is available that creates a Pack subfolder on the user’s iCloud Drive and saves a pair of demo lists (Clothing and Tech).

Geat addition to Rose’s shortcut! Makes it much easier to maintain the lists.

I’ve been trying to extend the functionality myself but there is something wrong with my approach. I want to take each list and present it to the user with a ”choose from list”-step so that you can deselect a few items you don’t need on this particular trip. Then assemble the remaining and continue the shortcut. And do this for every list. I can’t seem to assemble it correctly after the ”choose from list”-step.

Doing this, I was able to deselect specific items in each list. 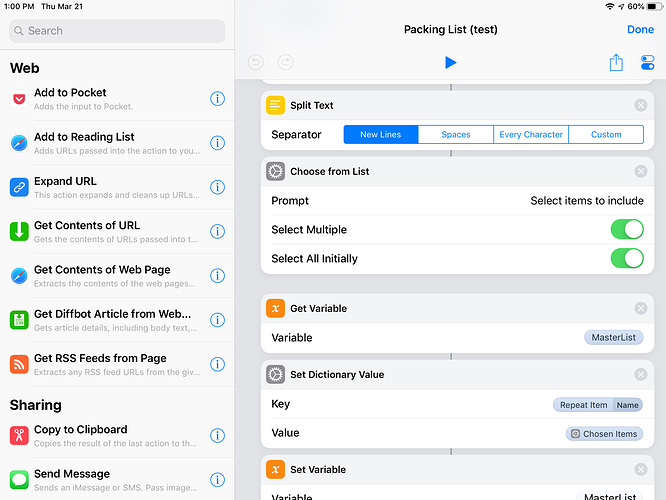 The previous solution works but is kinda clunky as the individual list items are selected before the list itself is either included or not. A possibly more pleasing option is to place the Choose from List action after the Get Dictionary Value that grabs the items pertaining to a given list. This updated shortcut is a better functional sequence and allows the user to deselect specific list items on-the-fly.

Perfect!
Can’t why I couldn’t get it to work but I will study your solution to learn!

Thank you very much!

Just an update to show that it’s very easy to change to dropbox if you want to manage your lists there. Just change the getFile step to dropbox and choose a folder. 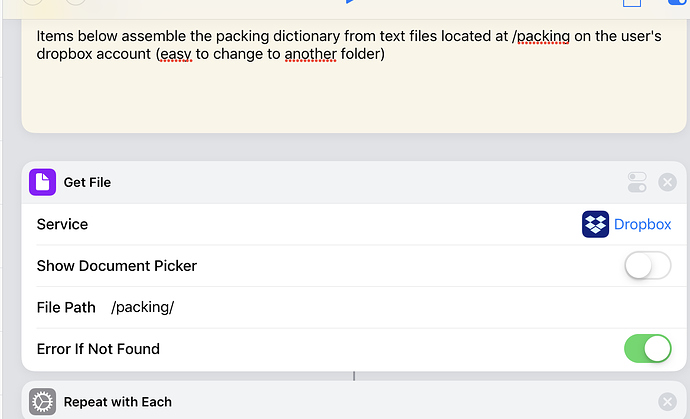 I need some help. I’m following Rosemary’s YouTube video showing a screencast of her modular packing list shortcut. I was able to copy her work, but I’m stuck on the section second from the very end. She has two lines that I can’t figure out how to set up on my own shortcut. Where does “Packing Items” and “Charge List” (see screenshot) get its information from? I don’t see any there in the shortcut where “packing items” and “charge list” are shown or defined. Can anyone help me? 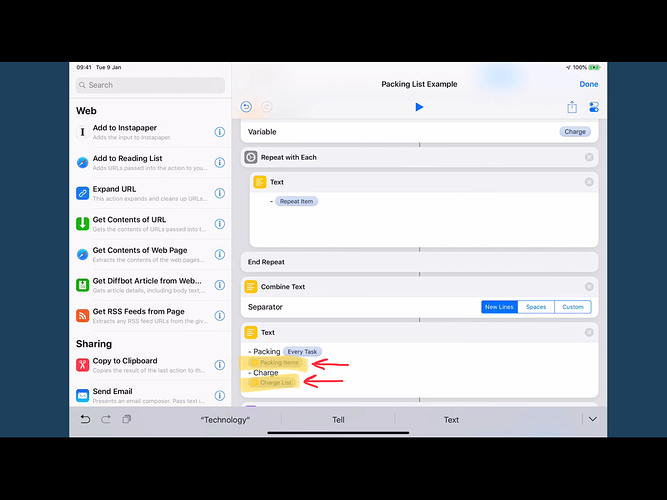 They are magic variables where the variable has been renamed to make it easier to understand what it is for. 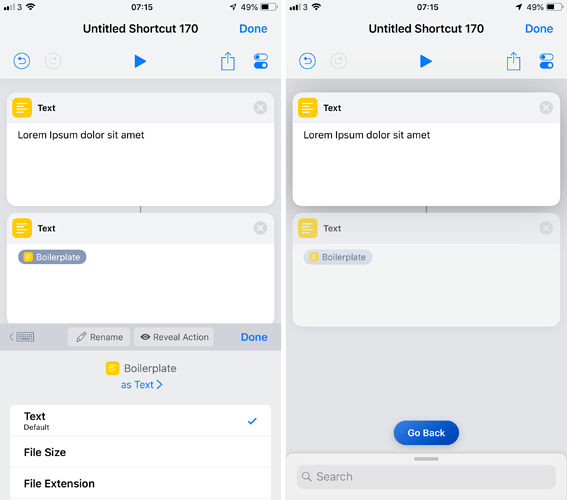 Thank you for showing me that!

Loved the episode! I made a slight tweak to RMO’s packing list example and built this Shortcut. I wanted to be able to easily edit and add new sections to the creator but found that to do this I would have to add text fields and quite a few blocks to the shortcut. My change is that the shortcut now just takes a large bit of text with each section separated by headings starting with "## ".

This is the first shortcut I have modified of RMO’s and I’m quite proud of it so wanted to share.