I’m new to Pushcuts, so hopefully it’s just something I’m not doing correctly, but I’m having a problem with Automation Server not being able to run any Shortcuts when triggered by IFTTT.

I have an IFTTT applet triggered by Alexa, with Pushcut as the action. That part works great.
I have a notification configured in Pushcut, with a default action (only) to run a shortcut. When the IFTTT applet is triggered, Pushcut receives the notification, and attempts to run the shortcut, however it always fails with the error:

Could not find the shortcut “My Shortcut.”

Is it always failing with that error, or does the name of the shortcut vary?

Can you share some screenshots of your IFTTT set-up and your setup in Pushcut that you are triggering?

“My Shortcut” is just an example, the actual shortcut I’m trying to use is called “Go Upstairs”, but I’ve tried changing it to other shortcuts with the same result. I’ve also duplicated the shortcut, and tried the duplicate “Go Upstairs 0”.

I don’t think the problem is in IFTTT, because the notification is reaching the Automation Server just fine, and I see it switch to Shortcuts and then back.

I also tried using a Webhooks IFTTT trigger instead of the Pushcut service, same result. 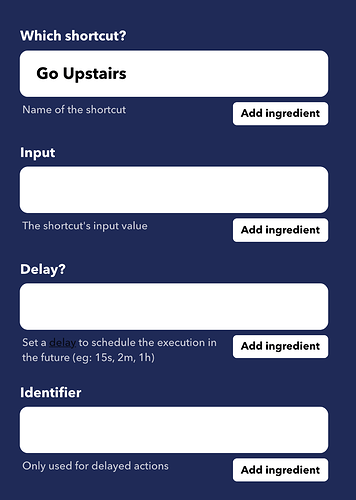 What happens if you go to Pushcut > Automation Server > Server Actions > “Go Upstairs” > Copy URL; then start the automation server on that device and use the copied clipboard URL in a web browser on another device to trigger the automation? Same result?

Have you tied restarting your automation server device yet?

That works, when I call the URL from a browser. So then I tried re-building the IFTTT trigger again as a Webhook, calling the URL as a GET, and that worked!

I have no idea why this happened - as I said, the automation server WAS receiving the notification before, and even know the name of the shortcut well enough to show it in the error message, but it couldn’t find it. Makes no sense to me, but hopefully these steps will help someone else

Thanks for your help!

Have you tried ensuring that your Shortcuts are correctly imported into Pushcut? This is done by going to the Shortcuts tab in Pushcut and, at the bottom of the page, tapping Import Shortcuts.

Yes, they had been imported at the beginning of the process (it was required to even select the shortcut to run)